U2 At The Obama Inaugural Celebration

Well, thanks to my friend Michelle who told me the show was being screened live on Sky channel 257 in the UK, I was able to watch the Obama Inaugural Celebration We Are One concert as it happened.
It was nice to see another of my top artists, Bruce Springsteen, performing The Rising, one of my favourite songs. It was quite noticeable that most of the performers were of the older generation, I was surprised that there weren't many representatives of the younger audience. In all honesty though, I was just waiting for U2 and of course they were one of the last artists to play! 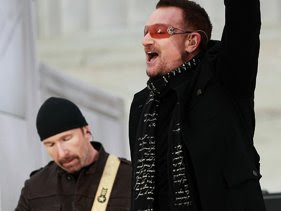 I felt a surge of excitement when I saw them there in the grand setting in front of the Lincoln Memorial, it had been so long since I'd seen them play! They performed Pride and City of Blinding Lights. I thought Bono's voice was not at it's best, especially in Pride when Edge's voice seemed stronger at times. Maybe Bono's vocal cords were cold as the weather seemed bitter there!
He said. "It's not just an American Dream, but an Irish Dream, a European Dream" as he has done before at U2 gigs, but added other various nations finishing with. "An Israeli dream," then there was a long pause before he finished with. "And also a Palestinian dream." He also said that MLKs dream would be fulfilled on Tuesday which I thought was a nice touch, and so true.
B 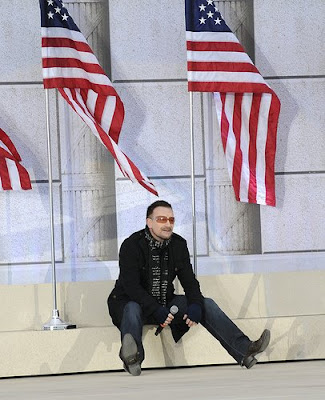 efore City of Blinding Lights Bono turned to Barack Obama and said. "What a thrill for four Irish boys from the northside of Dublin to honour you sir, Barack Obama, to be the next president of the United States." His voice was a little better for this song but he still struggled at times, but you know, for me that didn't matter, I was sitting with a big grin on my face! It was so good to see them play again. And they all looked fabulous, Adam especially seemed to be enjoying the occasion having a big smile on his face for most of the set.

Brilliant stuff, so good to see them again, and it all really whetted my appetite all the more for the new album and tour.
Photo Right: Justin Sullivan/ Getty Images


More photos here and more brilliant ones here
Posted by Sue Fell at 21:47

Email ThisBlogThis!Share to TwitterShare to FacebookShare to Pinterest
Labels: Adam, Bono, Edge, Obama Inaugural Celebration, U2, We Are One Concert