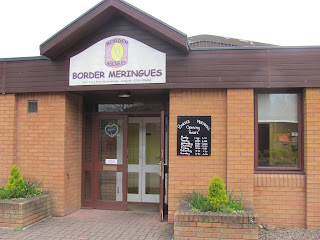 Finally Alison and I went to a meringue shop, my idea of heaven LOL!  Border Meringues supplies meringues to shops etc in the region, and it's very ordinary exterior hides a lovely cafe with meringue and cake delights to please everyone.  Delicious and well deserved after our historical traipsing around Jedburgh.  It's a small, but historically interesting town and well worth a visit.
Posted by Sue Fell at 22:13 No comments:

A Dog Called Hope by Bono

Bono left this poem in his hotel room in Jerusalem after his recent visit to Israel. For those who can't read the writing here is a transcription. Amichai was an Israeli poet.


"In Jerusalem, hope springs eternal. Hope is like a faithful dog, sometimes she runs ahead of me to check the future, to sniff it out and then I call to her: Hope, Hope, come here, and she comes to me. I pet her, she eats out of my hand and sometimes she stays behind, near some other hope maybe to sniff out whatever was. Then I call her my Despair. I call out to her. Here, my little Despair, come here and she comes and snuggles up, and again I call her Hope."

He signed, "With great thanks for great room in great hotel in great city, Bono.
reading Amichai ___" (can't make out the last word)
Beautiful words, scary drawing (love the shades though)!


There have been recent reports of Bono being in Israel.  Here are some pictures taken at the Wailing Wall in Jerusalem - the hair is looking better I am pleased to say LOL!  So much for U2 being busy recording, but then maybe it's just an Easter break while the kids are off school.  Let's hope so, it's about time U2 got serious about making new music.

Here's a video of Bono introducing Dierks Bentley at the 2012 Academy Country Music Awards on April 1st.  I have to admit I've never heard of this guy, but then again I can't stand country music so never listen to it.  Good to hear Bono is in Dublin, so maybe the rumours that the band is working on a new album there (at last!) are true....  Don't know what's happened to Bono's hair though, is he trying to cultivate a quiff??  My advice, (which I'm sure he wants LOL) get it cut!