The World's Most Beautiful Voyage - The Hurtigruten Norwegian Coastal voyage 6

We crossed the Arctic Circle once more at 9.15am and much of the day was spent at sea there were stops but only for very short periods so we could not go ashore. Natasa gave a  talk on Mythical Creatures of the Sea which was fascinating.

We arrived at Brønnøysund at 3.45pm and as there is a stop of one and a quarter hours we decided to go ashore to go to a small shopping centre that had a branch of a cheap Christmas shop we'd been in at Hammerfest as we wanted to buy something. Quite a few people got off with us and headed the same way. The weather was atrocious, howling wind and driving rain, but the centre was not far away and it was a relief to stumble into the shelter and warmth of the shops. We bought a few things in the Christmas shop and looked around some others before heading back to the Nordnorge. We tried to do a selfie with the ship in the background but it was so windy I couldn't hold the camera straight and, as my mother used to say, every picture tells a story!

The evening meal this evening was billed as the farewell meal as lots of German tourists were leaving the ship in Trondheim tomorrow. We had some free prosecco and representatives of all the departments of the ship's staff all lined up and sang a funny song about the trip and then went around the restaurant to toast "skol" with passengers. It was really lovely, very warm and friendly as the staff had been throughout our voyage. The meal, as ever, was delicious and we had the best dessert of the trip, "success tart" which was absolutely gorgeous - everyone was loving it!

That evening we just relaxed in the panoramic lounge, chatting and drinking the expensive wine very slowly.

Our last full day onboard the Nordnorge and I felt  sad that the trip was coming to an end. We had a stop for a few hours in Trondheim, but it started at 6.30am and finished at 10am  so we didn't go ashore, we had been on a tour of the city on our way north anyway.

We had our last meeting with Bjorn and David where they told us a bit about the shifts the staff work (22 days on then 22 days off) and arrangements for our departure the following day.  They also told us that it would get very choppy later in the night.

That evening Bjorn held a quiz about Norway in the panoramic lounge and Marian and I won it!  Considering some of the teams were six people strong I think we did very well! Our prize was one of the smart Scandinavian design water carafes each they used in the restaurant which we were both  very happy with.

We went back to our cabin but had barely got in bed when the ship started to go through the storm and there was no way we could sleep then!  The ship was tossed around by the storm until about 4am when things calmed down and we were able to get a bit of sleep, luckily neither of us got seasick.

We had to be out of our cabin by 10am but there were plenty of areas we could sit in, the ship was much quieter since the Germans had left yesterday. We had our last buffet lunch, I was starting to get used to having all this great food made for me.

I went out on deck to watch us head in towards Bergen and soon we were docked at the Hurtigruten Terminal.  We arrived late due to the storm in the early hours. We left the ship and got the bus to the airport. Bergen Airport is a strange place. It's not very big and has no proper place to eat or drink. Everything is self service and the shops are few and not very interesting, I remembered Bjorn had said there wasn't much at the airport in the meeting the previous day, he wasn't joking!

So that was it, the end of a fantastic experience, I absolutely loved it all. Norway is a stunningly beautiful country with lovely people, I felt very at home there. The Nordnorge was just the right size of ship for me, and it's staff were wonderful. Apparently Hurtigruten staff are well paid and there is a no tipping policy, though if you wanted you could leave something when you left. Nothing was ever too much bother for them and they went out of their way to talk to passengers. The food was amazing and some very seasoned cruise travellers we talked to were very impressed by the food and voyage in general.

I loved the fact the ship was a working ship and we were on a journey not a cruise. There is always something to see and I loved how you could just hop off the ship at the ports if you wanted. Sometimes we'd stop at some tiny place where, as well as goods and post, people, sometimes just one person, would get on or off, sometimes a car waiting to pick them up. Marian said it would make a good storyline for a book, the stories of these people where they had been, where they were going, what they had done.

Favourite events/places? I loved the tour I went on way up north to the winter/Christmas house in Skarsvag and the gallery in Kamovaer. The Midnight Concert in the Arctic Cathedral in Tromso was so beautiful.  And I'll never forget travelling along Vestfjord balancing against the window so I didn't have to test out my survival suit in the icy water, looking up at the vivid green ribbon of northern lights as they danced above the fjord.  The only disappointment being that there was not enough snow to be able to go husky sledding in Kirkenes. Winning the quiz was a perfect ending to our trip.

I would highly recommend sailing with Hurtigruten, especially if you want a trip that is a bit different. I will be doing another voyage with them, maybe in the spring to see another side of Norway. 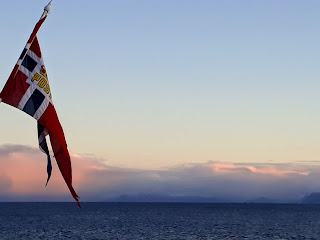