I had treated myself to first class for my long rail journey to London, had salmon and scrambled egg for breakfast and a delicious soup for lunch, very good indeed. When I got off the train at Euston it felt like I had alighted in the south of France it was so hot! Debbi was waiting for me and we headed for our accommodation, a two bedroomed apartment in Ealing. We found it ok and it was very nice were pleased to see all the basics food and drink-wise had been provided for us.

After a cuppa we haded to a nearby supermarket to get our supplies in. It was really, really hot and I was wilting, heat really saps my energy and I was glad when we got back to the apartment. We did our usual first night thing, eatingin and catching up on each others news. We also opened a bottle to Veuve Clicquot in celebration of being friends for 25 years!

Had a lie in and then headed into the city centre for our planned lazy afternoon in Claridge's. It was a hot and humid journey there and we were so frazzled when we got there when we went into the bar

the first a server asked us if we wanted some cool water which was like nectar and helps us recover. We had a sharing platter of  delicious duck spring rolls with a plum sauce dip and a cheese platter along with a bottle of  refreshing Sauvignon Blanc. We spent a wonderful afternoon relaxing in the bar and got friendly with George the server who loved a good chat! Claridge's is upmarket with excellent service, but it is not stuffy, it's an easy place to chill out in (and become bankrupt!)

We left and went into the nearby pub called The Running Horse for a drink (cheaper than Claridge's!) It was still very hot so we sat outside in the shade. Later we headed home and had an easy night eating in.

Debbi's husband, Keith, arrived early afternoon, he was going to see U2 for the first time that night! It was still very hot. We had lunch at Bill's on Ealing Broadway. Because of my stomach problems at the time I could not eat much so I had the pate starter while the others had proper meals. I must say I was envious of Keith's delicious looking flat iron steak!

Afterwards we got the tube to Richmond where there were shuttle buses laid on to take people to Twickenham Stadium.  Our seats were in the back corner, not the best but they gave us an all round view of the stage which was quite simple. A plain stage with a back screen with a Joshua Tree on it and a b-stage in the shape of a Joshua Tree and that was it. Noel Gallagher's High Flying Birds were ok. U2 came on at 8.15 (there is a 10.30 curfew at Twickenham.)  And played a few songs from The Unforgettable Fire, including Bad that had me in tears as usual and I loved the snippet of Bowie's Heroes on the end, it worked perfectly.  The screen came to life with Streets and the beginning of the playing of the entire Joshua Tree album.  The screen was amazing such bright, crisp colours. It was a treat to hear this album in full and I especially enjoyed hearing songs I'd never heard sung live before such as Trip Through Your Wires and One Tree Hill, but the highlight of was
Exit.  Black and white on the screen showing Bono whipping himself up into a murderous frenzy, quite scary! And also absolutely brilliant, it gave me goosebumps. A beautiful Mothers of the Disappeared,  with video on screen showing women in shadow holding candles that they individually blew out one by one, simple and moving, brought the first part of the show to an end.

The second part of the show was a mixed bag of songs beginning with Miss Sarajevo. Bono got the crowd to sing Happy Birthday for his daughter Eve who had turned 25 the day before. A new song called The Little things That Give You Away was played, sounded good, but I needed to hear it again before it really sinks in. At the End of the gig Noel Gallagher came back on and the show finished with U2 and him singing Don't Look Back in Anger. I was disappointed at the ending, it didn't feel like a proper U2 ending somehow.  I really enjoyed the show and felt it was very much a
show of two halves. The first very structured, a nod to The Unforgettable Fire album during the first four songs and then The Joshua Tree in full, it all flowed beautifully. The second half was more disjointed theme-wise and though I enjoyed it I preferred the first half.

Afterwards we walked to join the massive queue for the shuttle buses, it was still very warm even though it was late. It took over an hour before we were on our way to Richmond station.  We got home about 12.30am and did our usual post gig thing, pizza and wine and chatting until the early hours.

Debbi's husband left the next morning and Debbi and I went into London for a while, it was still far too hot for me and I was wilting. We had a late lunch in a restaurant called Burger and Lobster which was blissfully cool. It was expensive, so we both had the starter of crab goujons and a glass of prosecco.

Afterwards we headed towards Twickenham again. This time we had standing tickets, and we spent ages trying to find a good place. There was one place where Deb could see but I couldn't (I'm smaller) so we split up and I spent ages wandering trying to find a place where I could  see more. I eventually noticed a line of small women so headed there and found that in front of them was an open area at the entrance to the Red Zone kept free by security. I sidled through and stood at the end of the line of women and had a really good view of the main stage though could not see the b-stage (which seemed rather low on this tour) and that was my spot for the rest of the show.

The set list was quite similar to last night's show but I enjoyed it. Bono, as last night, was in good voice with amazing energy for his age. Exit again was stunning, and this time they finished with One, the perfect typical low-key U2 ending.

After the show Debbi and I met up and headed off to the shuttle buses again. It took even longer to get on one than the previous night and we got to Richmond station at 12.05 only to be told that the last tube was gone and we'd have to get a normal train to Waterloo! We simply could not believe it, there were loads of people coming behind us many, like us, not knowing London well and not sure what to do.  Surely extra trains should have been put on for such a major event? Debbi checked how far Ealing, where we were staying, was and as it was only around four miles we decided to get a taxi as if we went on to Waterloo we might not get a tube back from there and that was even further away. The transport organisers should take a lesson from Glasgow where crowds from Hampden are away in record time because of brilliant organisation by police and transport staff and train after train leaving the local station.

We got home and were really relieved to be back as we were really tired. The heat and standing for a long time took it's toll on us and I think that may well be our last standing gig! We had something to eat and some wine and then crashed out.

Next day we headed home, and I must admit I'm always glad to be leaving London too big for me and on this occasion too hot as well! But it was worth it for seeing the shows, such a treat to hear those all those Joshua Tree songs live, some for the very first time. 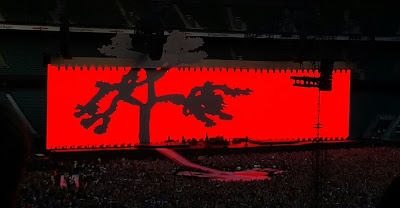