Well I've found time to start blogging about our wonderful holiday in Florida - what amazing times we had!


As I stepped out of the plane warmth hit me, Sylvia and I had left the cold behind and here we were, after months of planning, in Florida. Being a true U2 fan I had the urge to shout MIAMI! but I resisted.

Our first two days would be spent here in Miami. Our hotel was The Beach Plaza Hotel on Collins Avenue, to be honest I wasn't very impressed with it, (all the other accommodations during our trip were great) it was frayed round the edges, the hot water shower tap fell off when we tried to use it and then when that was sorted there was no hot water for two hours! The best part of the hotel was a lovely Moroccan-style garden where you could take breakfast and relax.
We really only had one evening and one day in the city. We didn't stray too far having heard some scare stories about parts of the city. We first went to the famous Ocean Drive on South Beach and saw it's beautiful pastel colo 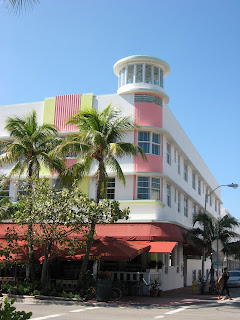 ured Art Deco buildings, all lit up at night. Then we went back onto Collins and on to Lincoln Avenue that was the main shopping area in this district. There was a lively yet relaxed vibe, great shops and lots of restaurants with outside dining areas on the pavements.
Next day we were up early after a good night's sleep to get over the jet lag of the long flight. We went back to Ocean Drive and the famous South Beach which was fabulous in the daylight. The brightness of it all struck me, and it was all smaller than I imagined. There were the beautiful people and also everyday people. The beach was sandy, the sea a brilliant azure blue, the weather was hot, but there was a pleasant breeze and plenty of shade from the palm trees.
We did some shopping in Lincoln Avenue, a lot of the things were quite expensive so I didn't buy very much. I noticed there were lots of people with their dogs, some dressed up, yuck! We had a delicious meal in a place called Books and Books, it felt strange to be eating al-fresco in November, but that's the norm here of course!
Next day we went to the Alamo car hire office which was a long walk from our hotel. It was chaos there, lots of customers, one person in the office and hardly any cars! People were waiting ages for their cars, we ended up waiting three hours for our car and didn't get the one we booked even then. I'd had to take the long walk back to the hotel to check us out and collect the cases and get a taxi back to the office during this time to avoid being charged for another day at the hotel - we weren't the only ones who had to do that. The letter of complaint is being drafted!
So it was three hours late when we were driving north to our second stopover at Cocoa Beach. In all honesty the drive was rather boring, through a flat, monotonous landscape and we were glad to reach our motel.
Posted by Sue Fell at 16:36 No comments: