Well, thanks to good friends in Germany who had a spare ticket for the U2 Brandenburg concert I am going to Berlin next week! Today (well yesterday now) I've been frantically making the travel arrangements inbetween events of an already busy day. But I got it sorted and will have a few days in Berlin to make the trip worth it. U2 alone are worth the trip but as I've written before, it's a city I've always wanted to visit so I have time to see some of the sights as well as U2!

Thanks a million Chris and Andy for thinking of me!
Posted by Sue Fell at 00:40 2 comments:

Late last night U2.com announced that U2 were going to play in front of the Brandenburg Gate in Berlin on November 5th as part of the EMTV Awards Show. Their appearance also marks the beginning of the Fall of the Wall celebrations marking 20 years since the Berlin Wall came down and Germany was re-united. I can hardly believe it was that long ago!
10,000 free tickets were up for grabs from 9am CET, I tried for them (though it would have been a bad time financially for me to go, I've always wanted to go to Berlin and some U2 things you just have to have a go for no matter what don't you?) but the site either froze or locked me out. Oh well, I never win anything anyway! The performance will be broadcast during the Awards show, the U2 set is supposed to be 20 minutes long, I hope they show all of it. At least I'll be warm and snug watching it on my TV, Berlin in November can be very chilly!
Posted by Sue Fell at 19:07 1 comment:

360 Ending and Coming Around Again

So tonight, in Vancouver, is the last gig of the 2nd leg of U2's 360 Tour. It's been a shorter tour than usual, but of course we have it all over again next year. Maybe the boys ar epacing themselves now they are hitting 50 LOL! I've enjoy the shows I saw in the summer, though am still not convinced that the claw actually does get the band nearer the audience. Though spectacular, it sometimes comes close to over shadowing the band, and the outer walkway if not utilised enough by the band members can seem like a barrier to those on the outside of it.

No UK or Irish announced yet either, and not that many places to fit any in. Surely they will play those countries again? My friend and I are nervously holding off buying gigs for other European countries (though we have been thinking of going for a couple of German gigs that still have tickets available) in the hope we'll know if we have gigs closer to home to work into the logistics! Please U2.com, let us know one way or another!

We have also been musing on seeing a show in the US again, namely in New York. Though I've been to the US a few times, I've never been to New York so I'd like to go there and take in a gig at the same time. I've been faithfully collecting Tesco points and converting them to airmile and I have quite a lot now which would pay for a big chunk of the airfare! We're going to decide one way or another when the New York gig goes on sale.

So, it's goodbye to one phase of U2 360 and planning for the next! Though it will drain the finances even more I can't wait for it all!
Posted by Sue Fell at 18:56 No comments:

Email ThisBlogThis!Share to TwitterShare to FacebookShare to Pinterest
Labels: New York Times, U2, U2 360 Tour, U2 360 Tour Dates 2010, USA

I ordered a foldable, soft dog crate on the Internet and it arrived today. I could not believe the size of the box and amount of packing there was for this relatively small item, in fact I thought they had sent me the wrong size crate! But they hadn't, below is a photo of the box and packaging and the crate, no wonder the forests are disappearing!! 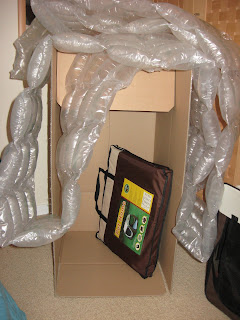 The Daily Mail has done it again with a great animal picture. This bull seal was obviously having a great day whilst lounging on a beach in Lincolnshire. How can you not smile along with him? Read all about him here 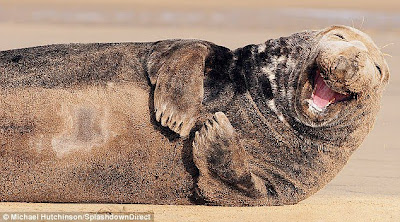 I was sitting in a traffic jam today and saw a man doing what must be the most thanksless job ever - sweeping up leaves on a windy day. No sooner had he got a heap of leaves together than the wind blew them all away again. Yet he patiently plodded on with his work, sweeping another pile together and repating the process over and over. I think the City Council should be a bit more practical and get the poor man one of those leaf sucker machines (no idea what their proper name is)!
Posted by Sue Fell at 23:49 No comments:

Mission Control It's Bono and Edge!

Bono and his sons Eli and John and Edge visited Mission Control at NASA in Houston the other day and had a fifteen minute chat with astronauts on the International Space Station. Some lovely moments (Harold the giraffe!) and what an amazing experience for Bono's boys, something I'm sure they'll never forget. 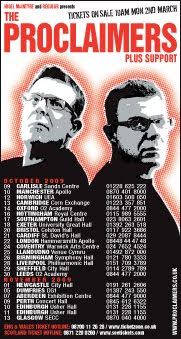 More dates are coming onsale for the U2 360 2010 European Tour and I'm getting jittery! This time I think we will be approaching getting the tickets differently. I'm not re-subscribing to get a presale, I think it's disgusting that they are making fans do that when things are hard for ordinary people financially and I'm not going along with it. So, we'll probably be going the route of public sales and red zone. At the 2nd London and Glasgow you could buy tickets on the day at the stadiums, so I think we will be ok. It's just a bit weird doing it this way after all the years of getting most of our tickets via the fan club. But hey, who needs U2.com?!
Posted by Sue Fell at 15:49 1 comment: