Venice - Beauty, Grandeur, People and Far from the Madding Crowd. 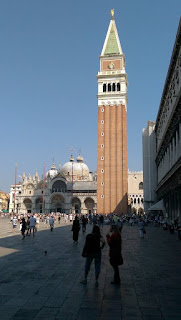 First of all I'll write a short write up of the trip my friend Jayne and I went on to Venice.  We arrived at Treviso airport on a hot morning. We got a shuttle bus into Mestre and walked the short distance to the Hotel Delfino where we were staying. After some lunch we got the very crowded and sweaty bus into Venice. We just wandered around in the city trying to take it all in. It was very beautiful but also very busy. We went into the first church we saw, S. Maria di Nazareth, built in 1674, and were taken aback by its over the top, ornate, baroque interior. It was just stunning, we both gasped as we entered. It was also an oasis away from the heat and crowds, beautiful, almost as if time had stopped.

We wandered a bit away from the main streets and it was like a different world once you go into the narrow alleys, much quieter, with the day to day life going on there for the locals, it must be hard for them to share their beautiful city with all the tourists. We headed back to the hotel and had an early night as we had an early start that day. 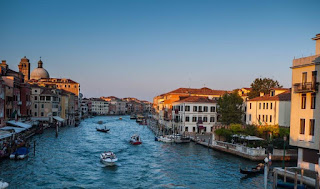 Next day we got the sweat bus to Venice and got on the valporetto, the water bus, to St Mark's Square. We had a snack at a cafe and got chatting to a couple from Peterborough, he was Italian and she was English, we had a nice chat. We then went to St Mark's Square, it was hot and busy with people. We went into the basilica which was beautiful but very dusty. We walked around the square peering in the famous Caffe Florian - the oldest cafe in the world opened in 1720 - with its stunning art work - too expensive to go into. Later we headed into the peace of the quieter lanes and found a cafe for a snack and the same couple from Peterborough were there small world! We had a lovely snack there and then got the valporetto to the Jewish ghetto where we were meeting our guide for a tour, pub crawl with chiccetti (snacks.) On our way we came across a gorgeous standard wire haired dachshund called Olga who I just had to pet!


Our guide's name was Beatrice and she was excellent. After a snack and prosecco we entered the nearby Jewish ghetto and immediately it felt like another world. The houses were five stories high (the only area of Venice where that is) and plainer in design. The word ghetto comes from the Italian Gheto meaning smelting which took place here. The Jews were shut in at night until Napoleon freed them in 1797 and it is still a Jewish area to this day. We came across a large square where children were playing, and the water wells were still there. Beatrice explained how Venice was built on wooden stilts and bricks. It was very peaceful and relaxing there.

We left the ghetto and went for our last drink and snack near the Rialto Bridge, more prosecco and that was the end of our tour, I would recommend it highly.

It was now almost dusk, the colours were rich and an almost full moon hung in the sky, it gave the place a magical feel. It was also much quieter along the canals and I wondered how the locals coped with the hordes of tourists that descend on the city nowadays.

Next day we rode the sweat bus into Venice and got a valporetto to the island of Murano, famous for its distinctive glassware. The trip took about 10 minutes during which we saw a coffin heading to the nearby cemetery island of San Michele on a speedboat, a bit different! Apparently nowadays it is expensive to be interred there and ordinary people are buried on the mainland.

It was raining but still warm (much preferred this to the heat there had been can't take the heat) when we got to Murano and it was noticeably quieter than Venice. We had a coffee in a nice little place beside the main canal. We went to the glass museum which was quite interesting but could have been better.

The heavens opened so we had a late lunch in a canal side cafe. The service was terrible, but we got the wrong bill at the end and only paid a small amount for our meal! Normally I would have said something but due to the bad service we felt it was only worth that anyway! Interestingly an Asian girl on the table beside us got a pizza with chips as a topping, even her friend laughed when it arrived!

We browsed the shops a bit more and bought a few items then headed back to the valporetto stop. We had intended going to Burano and Torcello too but as it was getting later decided to do that tomorrow. We bought some wine and food at the supermarket beside our hotel and ate in that night. 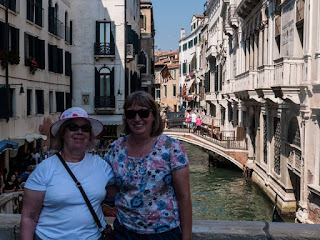 Another day another ride on the sweat bus into Venice and a repeat of yesterday valporetto to Murano then changed to another to Burano an island famous for its lace making. This island was much further north in the lagoon and I enjoyed the ride though we had to stand all the way. When you get off the boat at Burano the first thing you notice is the colour - the buildings are painted in bright colours that even on this rainy day looked so cheery. However, I was not so cheery when I discovered my phone had been stolen when I wanted to take photos. There had been someone on the sweat bus that I thought was touching me up and I moved away but he had already got my phone. For that reason I only have a few of my own photos from this trip.

We went to the lace museum which I found really interesting, much better than the one at Murano. We went to the church nearby but it was closed until later in the afternoon. I'm not really into lace so didn't buy anything.

We got a valporetto to Torcello, about 15 minutes north of Burano and when we arrived it was very quiet. We walked along a path beside the canal, passed a few houses, a bridge and ended up in an very old looking square which had small Byzantine-looking  cathedral of Santa Maria Assunta. Unfortunately we couldn't go in as there was a wedding on. We wandered along a path away from the square which lead to a reedy channel of water which I imagine most of the lagoon once looked like. I really liked Torcello, loved the peace of the place.

It was just after 4pm when we headed back towards the valporetto stop, the boats only come to Torcello once an hour so we went into a little cafe and had some prosecco and chatted. We next checked the time and it was just after 5pm so we decided to catch the 6pm valporetto and had more prosecco and chat! When we did leave the cafe the sky was blue and the sun shining and the walk to the stop was delightful. Later I found out that Torcello was once highly populated and a leading trading island of the lagoon, hard to imagine.

Venice is a beautiful and unique city in so many ways, but for me though it was too crowded during the day, it was an ocean of people and I don't like that. It is one of those places that you have to visit once in your lifetime though and the islands nearby are ideal if you want a day chilling.

All photos by Jayne Malley. 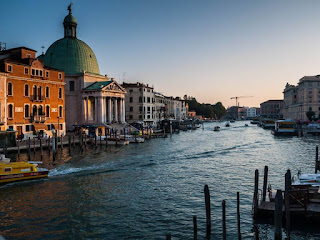