I'd heard a lot of good  reports about the Hidden River Cafe so was looking forward to going for the first time with my cousin Glen. It's name is appropriate, it is well hidden in the countryside east of Longtown, but we eventually found it ok with the aid of sat nav.

The setting is beautiful, the cafe is on a hill overlooking the wooded valley of the River Lyne. You can also see one of the gorgeous luxury log cabins that you can rent nestling within the trees. There is a seated area outside which would be a lovely place just to relax with a glass of wine.

The cafe itself is quite small, modern-rustic in style. The menu was European fare, varied and different, it was hard to choose what I wanted as there was so much that tempted me. 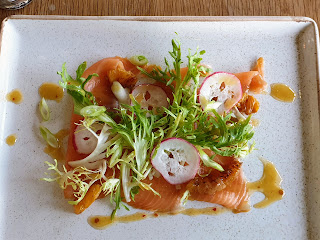 In the end I chose the smoked salmon, burnt orange and walnut salad which was delicious. Glen had hummus, heritage tomato, feta and olive salad which was loved. For the main course I chose chargrilled herby chicken with summer vegetables and Jersey royals, it was very good. Glen had smoked salmon pasta and she also enjoyed her meal. For dessert we both went for tiramisu with pistachio ice cream, a treat for me on my diet, which was excellent! 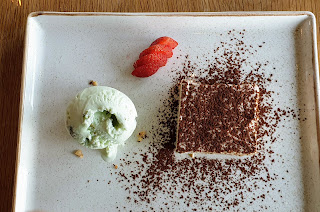 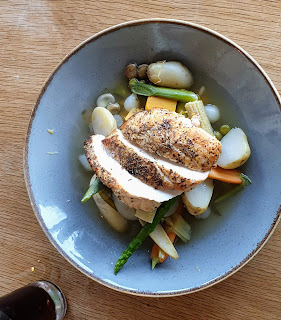 The service was friendly and professional, the atmosphere was relaxed and it cost us £34 for three courses and an alcoholic drink each.  The Hidden River Cafe may be a bit out in the wilds but it is well worth the drive.

After a smooth rail journey I met my friend old school friend Marian at Stratford station. We walked the short distance to our apartment, which turned out to be really lovely with good quality furnishings and everything we needed as well as being very central.  There was also milk, tea and biscuits there for us, most welcome after a long journey!

After settling in we had a walk around the town. It was late afternoon so the tourists were dissipating and it was pleasant just wandering around.  We ended up at our favourite pub The Dirty Duck which has many fond memories for us from our first visit with school in the early 1970's (we were given a lot of freedom and being under 18 wasn't a problem!) It hasn't really changed very much. We had a meal, I chose chicken and asparagus salad followed by a yummy gin, blackcurrant and prosecco cheesecake, All washed down with a perfectly made Pimms, this pub by far makes the best Pimms I've had! 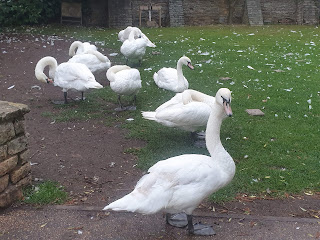 Afterwards we crossed the road to where the swans were coming out of the river to what appeared to be a preening place which was covered in their white feathers. One swan was very cheeky and came up to me and then started following me! I was careful as I know swans can be aggressive and are strong! Luckily he was very docile, just curious I think. We walked along the path by the river and it was so peaceful and tranquil, something I remember from every visit I've made to Stratford, there is just something really relaxing about the stillness of it on a pleasant summers evening, good to see it is something that hasn't changed over the years.

We had lunch and then crossed the river an walked past the new big wheel there, somehow it just didn't look right in Stratford, and we only saw people on it once during our stay. 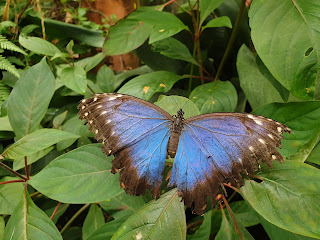 We went to the Butterfly Farm, a place that has been there for a long time but I had never visited it. Inside it was very hot and humid, full of tropical plants, ponds, butterflies, Chinese quail and loose iguanas that stayed well out of the way. There was a little archway covered in vegetation and there was a sign beside it saying to beware as the iguanas like to sit on top of it and defaecate! And yes, when we looked up there was an iguana there so we went through the archway quickly! There were butterflies everywhere many very colourful and often landed on you. We never saw the Chinese quail but we could often hear their mournful call. There was a case containing pupae and you could watch the butterflies slowly emerging their wings at first crumpled then slowly spreading out in all their beauty. All in all it was really fascinating to see and learn  about the lives of butterflies.

Afterwards we sat and relaxed in the lovely small garden around the farm. It was warm and sunny, we could smell the herbs from a little herb garden nearby and I watched a big, fat bumble bee squeezing into snapdragons to get the pollen prize hidden inside. Sometimes the simple things in life are the best.

In the late afternoon we went to The Opposition restaurant in Sheep Street and we chose something from the very reasonable pre-theatre menu. We both had the same, rarebit to start, Mediterranean lamb for mains and delectable Eton mess for dessert. washed down with red wine, all delicious, we agreed it was definitely the best meal we had whilst in Stratford on this visit.

After our meal we walked the short distance to The Swan Theatre to see The Provoked Wife by John Vanbrugh. The Swan is a small theatre holding 426 in a Globe-like galleried design that means all the audience is close to the actors. This theatre was not open when we first came to Stratford all those years ago.  It has the most beautiful stained glass windows,

The play was a typical Restoration romp, funny, witty while also looking at the trap of a loveless marriage plus other sub-plots. It was performed in period costume which I generally prefer. We both enjoyed it very much. 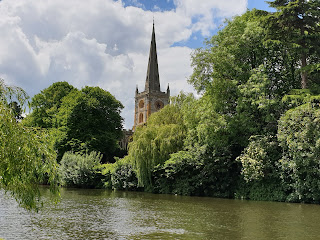 As it was another warm, sunny day Marian and I decided to cross the bridge to the other side of the river and do a walk we found in a book in our apartment.

We crossed over the Avon and passed by the new big wheel which seemed a bit incongruous in a place like Stratford, we only saw someone on it once. We took the path that followed the  bank of the river, and it was lovely, warm with the wind rustling gently through the willow trees, a few people messing about on the calm river, others walking their dogs. We saw a heron on the other side of the river that stood perfectly still for five minutes. We crossed a footbridge to the other side of the river and walked through a residential area where we fantasised about buying one of the apartments that had large balconies overlooking the river, what a sight to wake up to each day! 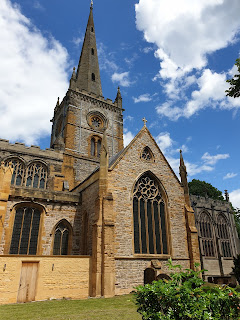 At Trinity church we again walked along the riverside path back into the centre of Stratford. We popped in the The Dirty Duck for a late lunch.

Later we set out from our apartment to look for a place for another pre-theatre meal and were tempted in to another  place in Sheep Street called Wildwood by the offer of free garlic bread! We had bruschetta and pizza and the food was good.

Afterwards we went to The Royal Shakespeare Theatre to see As You Like It. We hadn't seen that play for a long time were really looking forward to it. The play was joyous, colourful and there was a lot of audience inclusion, also some signing. The set was sparse but the space was well used. At the end a huge puppet of Hymen, the Greek god of marriage literally unfolded on stage, very effective.  We enjoyed last night's play but Shakespeare always has the edge on other playwrights!

On the way home we were accompanied part of the way by two mallard ducks! They were picking up food from the pavements outside cafes. It was late and they were a bit from the river but they seemed to know where they were going.

Once more we had a wonderful time in Stratford upon Avon, and once more we were blessed with great weather too. We have decided to go back in two years time to celebrate 50 years (yikes!) since our first visit as schoolgirls.