So  Bono eventually made it home to Dublin despite being held up by the weather.  He found time to go out busking tonight in Grafton Street as he did last Christmas.  Shame it wasn't next week when I'll be there!

Ice on the Solway Firth

The Arctic weather is making the Cumbrian seascape look like something from Iceland or Scandinavia.  Someone I know took the following photos of the ice in the Solway Firth and dock at Silloth, a little seaside town not far from where I live.  I can't remember ever seeing the sea freeze over like this before. 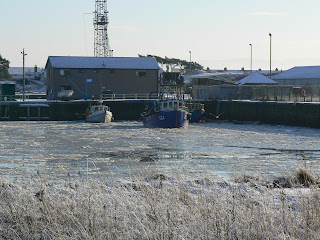 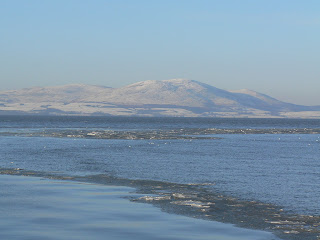 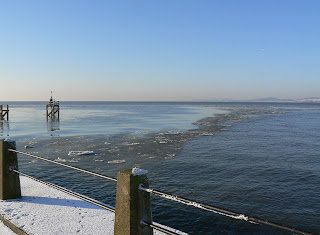 After the sun of Down Under Bono and Edge came back down to earth with a bump.  Whilst trying to get home to Dublin they were diverted and delayed by the Arctic weather that is hanging over the British Isles at the moment and had to slum it with everyone else. How I wish I'd been on that train!

Read about it here
Posted by Sue Fell at 17:42 No comments:

Email ThisBlogThis!Share to TwitterShare to FacebookShare to Pinterest
Labels: Dublin, Ireland, Snow, U2

A Christmas Message From Pepsi the Dachshund 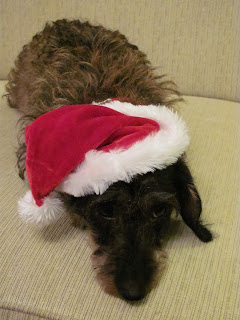 ﻿Hello, I'm Pepsi, looking very sweet and gorjus.  Like my hat?  My mammy bought it for me, I need it with all the ice and snow outside, not gud wether for dachshunds!

I thort I'd write a little Christmas message to you, pleese excuse any spelling mistakes, I'm very clever but am only two.  My big brudder Max wouldn't wear his hat, or pose for a foto, he was just watching when I had my foto taken, he can be a bit anti-social, but I love him anyway, he's my best pal. 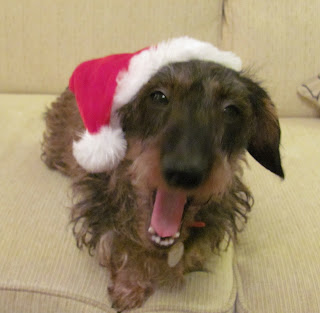 And here's me showing my true colours, (I have a lovely smile and don't you think?) a bit of a rascal who can't keep out of trubble for long - that's what my mammy says anyway, but I just love having fun, fun, fun  BOL!  She wasn't very happy when I chewed her boots the other day, she went rather red in the face and said sum strange words.  But she soon loved me again when I laid on my back to let her tickle my tummee. 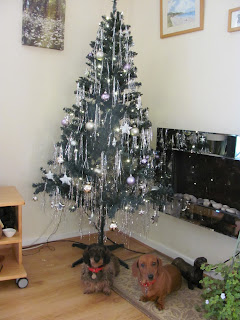 I eventually managed to perswade Max to pose under the Christmas tree with me, here's our festive foto.  Only four days to go - I'm soooooo looking forward to Chrisrmas and TURKEY!
Happy Christmas to you all, and health, happiness and lots of juicy bones for 2011,  from mammy, Max and me, Pepsi! xxxx

And I thought it was cold here - I thank my lucky stars that I'm not in Ohio!  Read and watch this amazing story of the lighthouse on the coast of Lake Erie that has turned into an ice house here
Posted by Sue Fell at 18:24 No comments: 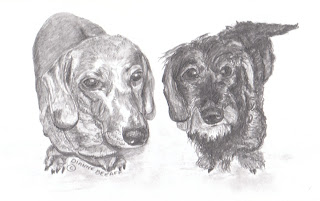 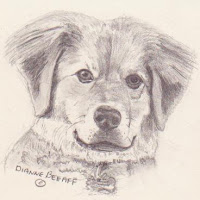 Would you like an original drawing of your pet to treasure?  Well, you can now commission a unique portrait of your pet for just $45 from professional artist Dianne Beeaff.

The drawing would be a miniature (approximately 4" x 3") and  executed in pencil from your favourite photo of your pet.  Dianne draws any kind of pet, not just dogs.

I've included a couple of examples of her work in this post - including one of my dogs Pepsi and Max, which I am very pleased with, she's really caught their looks and personalities.  It's lovely to have a drawing of my boys!

Dub of the Year

PRIDE: U2 frontman insists capital can be a world-beater again


POP star, peace broker, humanitarian -- and now The Dubliner of the Year.

After scooping most of the top awards around the world it's only fitting that Bono should be recognised in his hometown.

The U2 frontman will tomorrow be announced as the Dub of the Year in The Dubliner magazine -- to the surprise of.... well, no one.

Bono was floored with the title and said being named The Dubliner of the Year was the perfect way to wrap up the year.

"Dublin is a state of mind and a place. What's being a Dub?

"I don't know, but I am one and proud of it through and through.

"The messy head, all the earnest conversation, our spunkiness and punkiness, our sense of fun, the self-deprecating over-confidence.

"We are so many contradictions.

"Dubliner of the Year crowns a great year for me and the band, not everyone's experience I know.

"I'm feeling very blessed and grateful, and deep down in my gut, I know this city has what it takes to be a world-beater once again.

Editor of The Dubliner Paul Trainer said that he was the natural winner for the 2010 title.

"Bono has inspired many of the articles we have published over the last ten years. Wherever he goes, he takes a bit of Dublin with him and in the last year he has taken our city to every corner of the earth. He is a Dubliner who makes us proud to be The Dubliner," he said.

Famous Dubliners have come out in honour of the superstar to celebrate his newest accolade.

Former Dubliner of the Year Brian O'Driscoll is often considered one of the capital's best ambassadors, and he praised the iconic singer for staying loyal to his roots.

"No matter where he is in the world, whether on stage or meeting world leaders nobody is ever in any doubt that Bono is a Dubliner through and through," he said.

And Danny O'Donoghue from The Script, whose band has often been compared to U2, praised his hero as a success story which should be celebrated".

"Bono has got what most musicians search for all there life -- 'heart'. His belief changes others. He made it possible for Dubliners to dream, to think 'what if?'

"His belief and drive as a Dubliner got him to where he is today and we all need to be reminded that we drink the same water.

"So I congratulate Bono and say well done, keep flying the flag for Dublin and Ireland," he said.


Check out tomorrow's issue of The Dubliner, available every Thursday in the Herald, to find out all the details on Bono winning the title, and what 2FM DJ Dave Fanning, Gavin Friday, Senator David Norris, Mick Pyro, Niall Breslin of The Blizzards and Shane MacGowan have to say.

The first time I heard of Arcade Fire was during U2's Vertigo Tour a few years ago.  Well I say heard of them, it was their song Wake Up, played just before U2 took to the stage, that caught my attention - it was amazing.  I found out who sang it and have enjoyed most of the bands music since.  There are seven main band members, but on stage they are also joined by others (I've never worked out how many), so they are not your average four piece rock band visually - or sonically.

I downloaded their third album The Suburbs a while ago.  I'd heard lots of positive reviews but I've been busy and only listened to bits of it here and there.  But tonight I made the time and sat down and listened to the whole thing - and this album most definitely has to be listened to as a whole, it's an amazing, powerful sonic experience.

The Suburbs is complex lyrically and musically, and like most U2 albums, the songs are interlinked in theme, it is very much a single entity and a grower.  I feel I need to listen to it a good few more times before I could attempt a proper review, but what I can say now is that this is an excellent album well worth buying.  Arcade Fire have their own "wall of sound" and are like no other band around.  And in this age of  made-to-order bands it's refreshing to know young people still have the hunger to create and express themselves and how they see the world around them via excellent rock music!

Read a review by NME here that says it better than I ever could.
Posted by Sue Fell at 21:24 2 comments:

Email ThisBlogThis!Share to TwitterShare to FacebookShare to Pinterest
Labels: Arcade Fire, The Suburbs, U2

This song never fails to send shivers down my spine, lovely version, great sound at that gig.  Roll on Canada next year!

You know life is wieder than fiction, this story was reported by the BBC


A woman who dialled 999 to report the theft of a snowman from outside her home has been branded "completely irresponsible" by Kent Police.

The force said the woman, from Chatham, thought the incident required their involvement because she used pound coins for eyes and teaspoons for arms.

During the call the woman said: "It ain't a nice road but you don't expect someone to nick your snowman."

Kent Police said officers had given her advice on real 999 emergencies.

The force said the call was made at the same time as operators fielded thousands of other phone calls about the heavy snowfall and sub-zero temperatures in the county.

During the conversation she said: "There's been a theft from outside my house.

"I haven't been out to check on him for five hours but I went outside for a fag and he's gone."

When she was asked who had gone, the woman replied: "My snowman. I thought that with it being icy and there not being anybody about, he'd be safe."

She was then asked whether it was an ornament, and answered: "No, a snowman made of snow, I made him myself.  It ain't a nice road but at the end of the day, you don't expect someone to nick your snowman, you know what I mean?"

The operator then told her she had rung an emergency line and she should not be calling it to report the theft of a snowman.

Ch Insp Simon Black said: "This call could have cost someone's life if there was a genuine emergency and they couldn't get through.  It was completely irresponsible.

"We have spoken to her and advised her what is a 999 call, and this clearly was not."


﻿﻿On 30th November Bono (looking very smart) and Edge flicked the switch to illuminate the Sydney Opera House and the Harbour Bridge in red ahead of World AIDS Day 2010.  Adam was also there, Larry seems to have opted out or maybe he was just in the background.  With the lads at the ceremony were New South Wales Premier Kristina Keneally, Prime Minister Julia Gillard, Chair of Pacific Friends of the Global Fund, Wendy McCarthy.  More than 80 iconic landmarks, (including Buckingham Palace and the Houses of Parliament in the UK) across 13 countries will join (RED) to promote awareness of the ongoing fight against the AIDS epidemic, by turning red to mark World AIDS Day on December 1.   On the evening of the 1st U2 play their first concert of the 360 Tour in Australia in Melbourne.