U2360° At The Rose Bowl was the penultimate gig of last year's U2360° Tour in support of their Grammy nominated album No Line on The Horizon. The Rose Bowl performance was the band's biggest show of 2009 and U2's biggest ever US show, with a live audience in excess of 97,000.

The show was also streamed across seven continents via YouTube. The first ever live streaming of a full-length stadium concert, U2360° at the Rose Bowl had over 10 million views on the channel in one week.

Shot entirely in HD, the concert was filmed with 27 cameras and directed by Tom Krueger who had previously worked on U23D, the first live action 3D concert movie taken from U2's Vertigo Tour.

Available in standard and 2-disc deluxe DVD formats (see below), U2360° At The Rose Bowl will also be U2's first concert available in Blu-ray. The deluxe formats and the Blu-ray will feature a new documentary called Squaring the Circle: Creating U2360° with new interviews from U2, Paul McGuinness and the team behind the touring production.

Tracklisting of U2360° At The Rose Bowl is as follows:

Get On Your Boots, Magnificent, Mysterious Ways, Beautiful Day, I Still Haven't Found What I'm Looking For, Stuck In A Moment You Can't Get Out Of, No Line On The Horizon, Elevation, In A Little While, Unknown Caller, Until the End of the World, The Unforgettable Fire, City of Blinding Lights, Vertigo, I'll Go Crazy If I Don't Go Crazy Tonight, Sunday Bloody Sunday, MLK, Walk On, One, Where The Streets Have No Name, Ultra Violet (Light My Way), With Or Without You, Moment Of Surrender.

U2360° At The Rose Bowl is released in the following formats:

Email ThisBlogThis!Share to TwitterShare to FacebookShare to Pinterest
Labels: U2 360 Tour, U2360° At The Rose Bowl DVD

- Posted using BlogPress from my iPhone

U2.com has announced that a DVD of the 2009 Pasadena 360 concert will be released soon. No exact date but rumours are that it will be late May, which would make sense as it's just before the next leg of the tour. 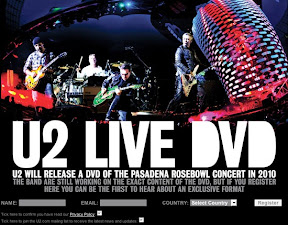 Email ThisBlogThis!Share to TwitterShare to FacebookShare to Pinterest
Labels: DVD, Pasadena, U2, U2 360 Tour

When Bono turned up in Ghana last week no one really knew why as it was unpublicised.  Now it has emerged that ONE has embarked on a "listening and learning" trip to Senegal, Ghana, Mozambique and Kenya with members of  the organisation's board and supporters.  You can read more on the trip blog here
Posted by Sue Fell at 13:27 No comments:

Email ThisBlogThis!Share to TwitterShare to FacebookShare to Pinterest
Labels: Africa, Bono, One

Just love this, so funny and Hudson looks just like my Max!

Email ThisBlogThis!Share to TwitterShare to FacebookShare to Pinterest
Labels: Dachshund

I'm just recovering from a nasty bug that resulted in me spending most of my weekend either in the bathroom or crashed out in bed and feeling very sorry for myself!  My dogs had to make do with runs in the garden rather than walks, but they were so good and slept when I did, they know when you are not well.  I'm still not 100%, but much better than I was and am now back into the usual swing of things.

U2 have been so quiet over the last few weeks, various "off duty" sitings of Edge and Bono in New York and the other day Bono popped up briefly in Ghana.  But there is no sign that the band are together working on any new material.  It's been a strange year for them really, an album release that was generally well received critically, but not a huge hit, and poor chart positions for single releases.  A stadium tour of Europe and North America that sold very well considering the difficult financial times.  The Brit, Grammy and Meteor season has been and gone and U2 did not win one award though they were nominated in the two latter events.

After the tour Bono was going on about another album they hoped to release this year called Songs of Ascent.  Then the album became an EP, and now there is talk of, maybe, a new single before the next tour starts.  This doesn't sound like a band that is brimming with creativity and "on fire" to use the main man's favourite term.  I wish they wouldn't come out with these kind of statements only to disappoint fans.

It may just be me, but I sense a change coming for U2, I'm not sure what, maybe they are stepping back a bit, which I can understand.  Adam has just turned 50 and Bono will do so soon, a decade birthday always makes you ponder and look at where in your life you are now, your path forward, the things you have left behind.  Perhaps they are taking time out to chill and to decide just what is going to happen with the band and maybe they will just have to learn to accept that biggest isn't what they are now.  But biggest doesn't matter anyway, we fans have always known that.

And finally, I want to share a very odd thing that happened to me earlier this evening.  I went to work as usual, and when I came out one of my car headlights was on!  It had been light when I went to work so my lights were off when it was parked (my lights go off anyway when the engine is switched off).  I thought it was well weird and if anyone has an explanation I'd love to hear it!
Posted by Sue Fell at 23:28 No comments:

Email ThisBlogThis!Share to TwitterShare to FacebookShare to Pinterest
Labels: Bono, Edge, U2 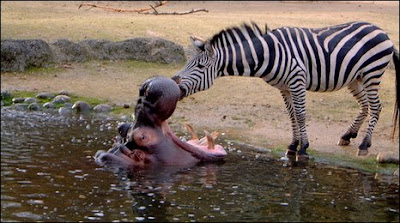 Another Gig That Never Happened!

My friend Debbi came up to stay with me last weekend.  We, and our friend Dawn, were supposed to see the U2 tribute band ZU2 play locally.  Unfortunately the band cancelled due to poor ticket sales (we saw them in the same place last year and it was a sellout - weird).  So instead Deb and I went out for a meal and then came back to mine, opened our bottle of Veuve Cliquot (two bottles in two weeks we are living the high life!) and watched the Amsterdam 360 DVD.  It was wonderful to relive the gigs and it brought many happy memories from last years shows.  This DVD is just as good, if not better than many official ones, and it is meant to be shared between fans, not bought, which is how I got it and the way it should be.

Although our weekend didn't quite go as planned I really enjoyed it.  It's so nice to spend time with a good  friend where you can be yourself, where silences are not uncomfortable and sharing and laughs come easily.

It was a lovely day today, blue skies and a little warmth once more in the sun.  Crocuses are brightening up the gardens and verges, daffodils are nearly out and the crows are gathering in the tall trees - always a sign spring is not far off.  Soon I expect it to be what I call Bird Song Day, when all the birds seem to be singing to herald in the rebirth of spring, nature is amazing.

Heard this on the local news today, if you want a good laugh read about it here - someone must be feeling very embarrassed now!
Posted by Sue Fell at 23:27 2 comments: