I read the headline that Bono and Edge were at a premiere in Leicester and initially thought it must be a wind up. But no, they were there to attend the world premiere of Finding Neverland, a musical about the life of J M Barry, the author of Peter Pan. Apparently the musical's producer, Harvey Weinstein, invited them.  Don't know why the premiere was in Leicester but I think it is a good thing, why should it always be London?

Read all about it, plus lots of photos, here.
Posted by Sue Fell at 17:21 No comments:

An Afternoon at the Cumberland Bird of Prey Centre

My cousin Janet and I had planned this visit to the Cumberland Bird of Prey Centre at Kirtlebridge just over the border in Scotland (yet called "Cumberland"!) for ages and we were both excited at the thought of the visit.

We found the Centre which is actually in a lovely, large house set in a huge and very beautiful garden with the River Kirtle running at its foot. We were warmly greeted by Gary Swainson, the falconer, and his two dogs, a black spaniel with one white paw called Belle and a gorgeous chocolate coloured mini smooth dachshund called Cadbury

Gary invited us inside and made us a cup of tea and we all sat and chatted in the kitchen which had a gorgeous view over the large lawn to the river. Gary is a very friendly, open person and we felt very relaxed and at home. He also is very talkative, and told us of his plans to go to India soon to work with disadvantaged children for six months. You've got to admire people who do things like that. He got into falconry at the age of 15 and his knowledge amazing and enthusiasm infectious.

After we'd finished our tea we went outside into the garden and Gary introduced us to the birds in the aviaries.  I don't remember all the names or types of birds they were so bear with me!  One of the most striking birds was Bungle the Bateleur Eagle. A very large, mainly black bird that was illegally imported from Africa and seized, then after quarantine came to the Centre. These eagles hunt snakes and are kept in villages in Africa as the people believe (wrongly) that they keep snakes away. Unfortunately to stop them flying off their wings are often broken and evidence of this in Bungle was one wing that was a little deformed. He's lucky now that he has a wonderful home!

Gary said that it was best not to touch the feathers too much as the acid on our hands destroys the waterproofing of the feathers. But Bungle just LOVES his head being tickled and as soon as you reach out towards him he leans really hard against your hand and goes into a rapture when you tickle him! He almost falls off the perch, so funny and touching - also humbling that this magnificent bird allows you to get so close.
We saw owls, including the gorgeous Molly who'll I'll write about later, falcons, a turkey vulture and hawks.

Our first hands on experience was with one of the Harris Hawks (Gary had to put the hens and ducks away before he got the bird out as it would have attacked them). We walked up the lane by the house  (accompanied by Cadbury and Belle who were having a whale of a time!)  and took turns to feed the hawk. It would swoop down, take the bait (bits of day old chicks!) and then fly off into the trees again. Sometime it would swoop by missing you by a whisker, you just felt the wind of his wings, he was so fast.  We were surprised at how light the bird was when he sat on our hand.

After this we spent some time with two young owls. Gary explained that they were still learning and it was interesting to see that they were at different stages of learning. They are supposed to sit on posts and then fly to you when you offer the bait, one was getting the gist, but the other found the world soooo interesting that she became preoccupied with everything that was happening around her and was easily distracted.

Next came Molly, a fabulous, large owl, who I must admit, was my favourite. She was gorgeous and simply loved her tummy being tickled! She had big, intelligent orange eyes and huge feathery feet.  Gary stood at the other end of the garden and Molly flew to us swooping low over the lawn towards the bait. Her approach was silent, and Gary said that was because owl's wing feathers have serrated edges which the wind passes through and so doesn't make a noise. She did everything perfectly. Even though Molly was a large bird she wasn't very heavy. At one point Molly was on the ground and she and Belle were beak to nose. Belle just wanted to play but Molly was warning her off lol!

Gary told commented on the myths about owls. No they can't turn their heads 360 degrees, though they can manage 180 degrees.  Not all owls are nocturnal, approximately 50% are diurnal, usually, if an owl has orange eyes they are diurnal, and brown eyes for nocturnal . All Gary's owls had orange eyes and were definitely wide awake!

The next bird we handled was Bungle the eagle.  He was such a handsome boy and the only bird that had some weight to him.  Mainly black with a bit of grey and a red beak and feet. He flew slightly lopsided due to his wing injury but was still amazing, you really felt the weight as he landed on your hand.

Finally I handled a beautiful Gyr Falcon and Janet a handsome Peregrine Falcon. They weren't flown, but just sat on our hands as Gary gave them whole dead day old chicks. I was amazed at how much my relatively small bird ate - three whole chicks. His crop gradually got bigger, they must have amazing digestive systems!

And that was it, we went back into the house for a cup of tea and more chat. We felt privileged to have been able to get so close to such magnificent birds. It was worth every single penny and Gary was a wonderful host, AND he has a dachshund!  I'd definitely recommend it for a special day out, you can get info about all the different activity days here.

Coming Soon - A Permanent U2 Exhibition in Dublin 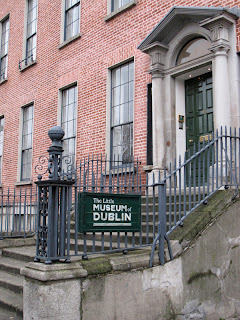 The Little Museum at St Stephen's Green in Dublin has announced that it is going to create a permanent U2 exhibition.  All I can say is it's about time, it should have been done years ago!! They are asking fans to help them out with rare exhibits, full details can be found here. Looking forward to visiting next time I'm in town. Now must look through my memorabilia and see if I have anything they might be able to use ......
Posted by Sue Fell at 23:41 2 comments:


Last week I went to an exhibition at Tullie House Museum in Carlisle called Georgian Carlisle. I always try to attend the exhibitions they have, they are usually very interesting and mostly free.  This exhibition looked at  all aspects of life in Carlisle during the Georgian period 1714-1836.  It was a time of massive change for the city, at the beginning of the period it was still a small, medieval, walled and highly fortified border city. But by the end of the Georgian era it was a much larger city in the throes of the industrial revolution, cotton mills being the major employer. There was a beautiful, large cotton spinner's quilt from the time on show which was full of symbolism.

Times though were very hard for some people and the exhibition covered the terrible poverty many people lived in. There were also regular outbreaks of cholera and typhoid.  There were little boxes around the exhibition which you could sniff that gave you an idea of how unpleasant the smells of the city could be. Dr John Heysham's promoted the medical interests and sanitary welfare of the poor people of Carlisle, and in 1782 he founded the Carlisle Dispensary, where the poor of the City could obtain free medicines and vaccinations. When he died in 1834, Dr Heysham left £1,000 to the Mayor and Aldermen and Councillors of the City of Carlisle in trust for the creation of a people's park and place of recreation within the City. It took  hundred years, but in 1934 Heysham Park was opened for the first time on August 25th and to this day it is still a pleasant park in the city. I didn't know why it was called Heysham Park until I went to the exhibition, now I know the full story behind it!

Another character of the city was Margery Jackson who was a miser who lived a very frugal life even though she was really a wealthy woman. She was seen walking her dog around town on the end of a piece of string, and rentals on properties she owned had to be paid in gold coins.  She stored these in a trunk at her home. When she died in 1812 at the age of 90, it took  hours to count all the coins, and they amounted to one and a half million pounds in today’s money

Another item linked to Margery at the exhibition was her Court Mantua dress. It in blue, hand embroidered brocade and measured six feet across. It was meant to to worn at Court by


married ladies and no one really knows why the unmarried Margery had this dress. The Court Mantua was part of a selection of fashion from the beginning to the end of the Georgian era.  And like life through these years fashion also changed beyond recognition from the stiff,  formality to the loose, muslin empire-line dresses of the later years. I thought the muslin dresses were lovely and they must have been very comfortable to wear.


I was surprised to learn that many streets and shops in Carlisle had gas lighting as early as 1820. There was a model of Carlisle at the beginning of the Georgian times and another surprise was that the street pattern in the oldest central area is still recognisable today.

I really enjoyed the exhibition. I love history and I learned quite a few things about my city. Well done Tullie House!