You Aint Seen Nothing Yet.....

U2 peeps will know this is typical of Bono LOL, so funny.  My next 360 show is only 38 days away and I'm loving the set lists of this leg, it makes it a very different show to what we saw in Germany last year. Roll on!

Email ThisBlogThis!Share to TwitterShare to FacebookShare to Pinterest
Labels: Bono, U2 360 Tour 2011

Just shows how resilient these little dogs are!
The Long and Short of it All: A Dachshund Dog News Magazine: Dachshund Lost In Tornado-Related Wreck Found 5 We...: "With tornadoes devastating much of the United States this spring, it's awesome to hear a story of hope when there is such despair. Excerp..."
Posted by Sue Fell at 01:25 No comments:

Email ThisBlogThis!Share to TwitterShare to FacebookShare to Pinterest
Labels: Dachshund, The Long and Short of it All, Tornado

Yesterday my cousin Janet, our friend Linda and I went for a pamper day at High Head Spa at Ivegill on the edge of the Lake District.  It's part of a place called High Head Sculpture Valley, there's a working dairy farm, a great cafe, art gallery and shop.  There's also a lovely walk in the valley that you can take which has various sculptures along its path.  They have just opened holiday rental accommodation too.  And at the back of the complex there's a large log cabin which houses the spa.

We arrived at 11am, the cabin was warm and cozy and we were shown into a room that had a hot tub, loungers and a sauna.  We had the room to ourselves which was really great and we could relax in there for an hour before our treatments. We got in the hot tub and chilled in there for a while.  Then we decided to try  out the sauna - none of us had been in one before.  Wow it was hot!  We didn't last long, I can see why they plunge into ice cold water afterwards normally!  However here there was no icy pool here, so we drank lots of cold water to cool down a bit.

We had two treatments each as part of the deal, you could choose from a back and shoulder massage, a facial or a manicure.  We all went for the massage and facial and they were fabulous!  I especially enjoyed the massage and felt really chilled afterwards, the others enjoyed their treatments too.  The girls who work there were very professional and friendly.  Afterwards we had a delicious lunch in the cafe was included in the price of the deal.

All in all it was a wonderful day and well worth the £45 cost, we'll definitely be going back.  You can visit their website here: http://highheadsculpturevalley.co.uk/
Posted by Sue Fell at 20:55 No comments:

This is one of the reasons why I'm a fan of Bono, you know I wish some of his detractors could see how lovely he is to fans.  Here he is in Mexico (where U2 are playing tonight) yesterday sharing birthday cake and champagne with fans waiting outside his hotel.  Love where he says, "Stand back a bit" when he's about to pop the champagne cork!  Bless.  Mind you, if I'd been there I would have wanted Veuve Clicquot!

A Bit of U2 in Falkirk

I've purposely not travelled anywhere this year because I was lucky enough to do a lot of travelling last year and needed to recoup some of my finances.  I've really been getting restless and pretty desperate to have a trip away though, and this weekend my friend Debbi and I went on a trip to Falkirk in Scotland.  The purpose of the trip was to see our friends in the U2 tribute band NU2 play, they are the best U2 tribute band we've seen.

Debbi came up from Stoke on Thursday, it was great to see her again and catch up.  As we are both on diets I made a very sensible, low calorie meal and we didn't have a lot of wine - almost unheard of for us!  Next day we drove up to Falkirk, a place neither of us had been before.  It only took two and a quarter hours to get to our Travelodge on the edge of the town.  My room really took me aback, very clean and obviously new, but very sparse.  No drawers, no bedside table (just a tiny niche in the wall), the "wardrobe" was just a short pole with a few coat hangers, a small wall mounted table with a white plastic chair, On the pale grey walls were a small TV and small picture and a mirror.  There was only a roller blind on the window, a duvet on the bed, but no bedspread.  It felt very cold and clinical and there was bags of unused space as the room itself was a normal size for a hotel of that kind.  But, having said that, it was fine for our purposes.

We got a taxi to the Behind the Wall club in the centre of Falkirk where the gig was being held.  It was a pub, restaurant and gig venue, bustling and loud with lots of different seating areas.  We found a table in the quietest area, the conservatory.  Our friend Alan, "Boner" in the band, came from the gig room upstairs to have a chat.  It was nice to see him again, it had been a long time since we'd met up as NU2 actually disbanded three years ago as one of the band members moved to the south of England, and we hadn't seen Alan since.  The band hadn't played at all during the last three years, but had got together again for this one off charity gig.  They were nervous as they had little opportunity to rehearse for this gig.

Later Deb and I went upstairs and caught the end of the Bladdered!, the first band of the night.  We could hardly believe our eyes to see middle aged men in make up dressed as schoolgirls in P.E. dress playing punk songs! (complete with wigs, vest tops, short white gym skirts - thank God they wore shorts beneath these! - and white socks, a sight to behold I assure you LOL!   Apparently this band has different themes to accompany their set, they've done the royal family and Dad's Army amongst others. 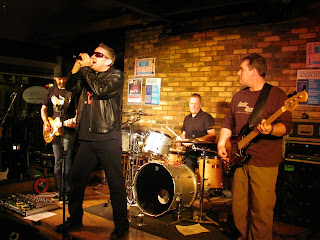 Later NU2 started their set with Vertigo.  During the first few songs the band were a little rusty, but by time they got to In God's Country they were in their stride and all the NU2 magic was back.  Alan's voice is so good and like Bono's that at times you think it is Bono himself singing, and though Mark (Edge) had not played guitar in three years he did amazingly well and the rhythm section backed the other two up very well.  I especially liked hearing In God's Country as U2 themselves never play that any more.

NU2 got the crowd behind them as they did a mainly U2's greatest hits set and went down a storm, Alan dedicated With Or Without You to Debbi and me which was really nice - I think Debbi must have travelled the furthest to be there and it's nice that was acknowledged by the band.  But it was well worth the trip, and it made us realise how much we'd missed seeing them play.  We had a chat with Alan afterwards and he said it was probably the last performance by the band, but perhaps a yearly reunion could happen, let's hope it does!

At 1am we ran the short distance in the pouring rain to the rank and got a taxi back to the hotel.  Once back we had generous glasses of wine and some Quavers.  The Quavers was like the best steak, we were so hungry, having not had a lot to eat that day because of our diets!  We chilled and chatted eventually getting to bed at 3.30am.

Next day we laid in as long as we could, leaving just before the midday checkout  - we still have the stamina to stay up a long time, but we don't bounce back to normality as quickly!  We had a light lunch at a place beside the hotel and drove home and then went to bed for a nap to fully come recover LOL!

By 7pm we felt relatively back to normal and looking forward to our forget-the-diet treat night.  I went to get a Chinese takeaway, we enjoyed that and then opened a bottle of Veuve Clicquot Champagne.  We'd been looking forward to that for ages and it was well worth the wait!  Nectar.  I love the good things in life.

I really enjoyed my little jaunt into Scotland, great to see NU2 again and spend time with a good friend.  It's only 55 days until my next jaunt - a holiday and U2 gigs in Canada - not that I'm counting.......
Posted by Sue Fell at 22:26 No comments: