Bye For a While!

Well I'm off galavanting on holiday to Florida next week for a couple of weeks (sun sun sun!!!!) followed shortly afterwards by a trip to Dublin, so there will be no updates here or on my sister site Luminous Times for a while. Check back from early December when I'll be back blogging once more!
Posted by Sue Fell at 00:37 3 comments:

Unfortunately I have had to decide not to adopt Gemma the beautiful greyhound. She was an absolute sweetheart, but my Max is too feisty to risk taking her on, he may just push her too far one day and she might turn on him. I must say she showed no sign of aggression, but I know I would worry as I know Max can be bolshy with big dogs. If I didn't have Max Gemma would be already living in my home. But she's such a gorgeous girl that I just know she'll find the right home very soon and she deserves it. I will join the Dumfries and Cumbria Greyhound Rescue and do some voluntary work for them, they do a brilliant job

I still hope to get another dog, but will look for a smaller one that doesn't freak Max out - he is ok with smaller dogs I know that. I'm sure somewhere out there the right dog is waiting for Max and I.
Posted by Sue Fell at 18:55 3 comments:

I always said to myself that once I retired I would get another dog, preferably a greyhound. I used to walk dogs for an animal rescue organisation and many of these dogs were greyhounds, dumped because they were no longer of use racing (they are retired from racing aged 3-5 years in general).

Well at the weekend the Dumfriesshire and Cumbria Greyhound Rescue had a Meet a Greyhound day at the local Pets At Home store. I talked to Al who runs the organisation and arranged for him to come round to assess me and to talk further about it.

He and Jenni came round accompanied by Gemma, a gorgeous six year old brindle greyhound. She was very sweet and gentle and wasn't bothered by my feisty Dachshund Max. Unfortunately Max was less welcoming, but I really do think it was because he was scared by this huge dog that had entered his territory. He did relax more as the meeting went on.

Al could see no reason why I couldn't have one of their greyhounds, I have a lot of experience with dogs and know how to look after them. So I've been provisionally allocated Gemma, but we all agreed that she and Max are going to need longer to get to know each other to see if Max will fully accept her. So Gemma's foster mother Jenni is going to bring her round and we are going to walk the dogs together and let them spend more time together in my apartment. I hope it works out, it's really up to my Max whether it does! 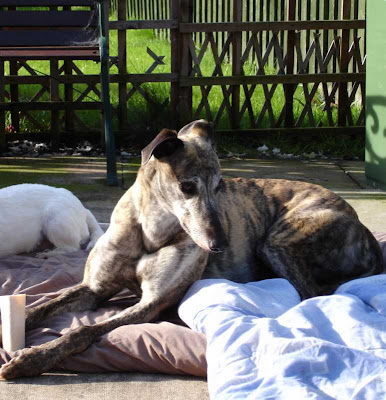 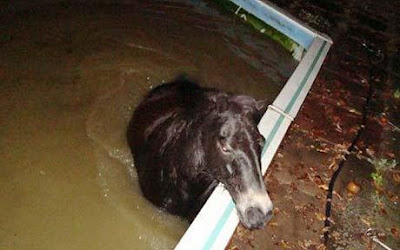 She said: "It looks like he was scrounging for apples in the garden and fell in when he trod on the tarpaulin over the pool. It's a good job he's got a lot of bulk, as it kept him warm while he was stuck in the water. After he got out he was taken back and checked over by a vet, but luckily he's fine."
Posted by Sue Fell at 11:35 No comments:

It's a while since I've written in my blog. since returning from Dublin it's been a time of adaptation for me, adapting to being retired. Initially after the holiday I had a "Well, what do I do now?" phase, I was a little at a loose end for a while. I knew watching daytime TV was not going to be a good way to fill my time! But gradually, things have changed. Firstly I've started sorting improvements to my apartment and that is keeping me very busy. It's really good that I have the time to start something and really keep at it until it's finished without having work to slow the process down.

Secondly I've started catching up with all my friends and see them regularly. I've lost the social side to working so getting together with people is all the more important - as well as very enjoyable! I'm finding now that I sometimes can't fit things in my diary which can only be a good thing. I also hope to start classes in the New Year and I'll probably get to know new people who are in the same position as me that way as well.

I'll be honest, I do miss aspects of my job. I miss some of the people I worked with and I miss the caring side of my work. The latter has surprised me but it shouldn't have really, I nursed for 30 years, it's a part of me and I miss that. I have a couple of holidays to look forward to in the next few weeks, but after them I am going to do some kind of voluntary work which will be an outlet for the "nursey" side of me.

So, here I am five weeks after my last working day, still adapting to this new life, but I can truly say that, for me, the pros of retirement have outweighed the cons and I'm enjoying being a "lady who lunches." Cappuccino anyone?!
Posted by Sue Fell at 11:44 No comments:

U2 Nominated in Best Act Ever Catagory in MTV Awards

U2 have been nominated in the best act Ever Category in the European MTV Awards to be held in Liverpool on November 6th. The others nominated are:
Green Day
Tokio Hotel
Christina Aguilera
Britney Spears
...... and Rick Astley
Rick Astley??? LOL I've heard it all now! I also must admit I've never heard of Tokio Hotel, showing my age there I think!
You can vote for U2 here
Posted by Sue Fell at 14:44 1 comment:

Email ThisBlogThis!Share to TwitterShare to FacebookShare to Pinterest
Labels: MTV Euopre Awards 2008, U2

An Ideal Husband by Oscar Wilde

We always try to go to the theatre to see a play when in Dublin and this time we went to see Oscar Wilde's An Ideal Husband at the famous Abbey Theatre.

The play was first performed in London in 1895 and is set in the world of the upper class in that city. The main characters are Sir Robert Chiltern, a supposedly wholesome, honest rising star in the House of Commons, and his wife who is involved in women's rights. Lord Goring, (named after where Wilde started writing the play), a witty playboy bachelor, the scheming Mrs Cheveley an old schoolmate of Lady Goring's each of whom have a dislike of each other.

Basically the plot is centred around Mrs Cheveley who tries to blackmail Sir Robert Chiltern with evidence she has of political corruption from his past that helped him on the road to success and fortune. She wants him to support a scheme she has invested a lot of money in that would fail without government support.

From this basis emerges a brilliant play of numerous twists and turns that looks at all sides of humanity. It's about trying to live up to other people's expectations, compromise in difficult situations, manipulation, accepting people's faults, loyalty, snobbery, wisdom, to name a few of the traits it explores. The character that initially seems most vacuous, Lord Goring, actually turns out to be the wisest and most loyal, and he has some of the best lines in the play:

"To love oneself is the beginning of a life-long romance."

"One should never give a woman anything that she can't wear in the evening."

"Fashion is what one wears oneself. What is unfashionable is what other people wear."

The mix of seriousness and humour is perfect. It would have been very easy at times for the play to fall into farce with all the people involved and the mixed messages and misunderstandings in the plot, but that never happens and that's the genius of Oscar Wilde's writing.

I really enjoyed this production by the Abbey Theatre, and I must say the posh upper class English accents were perfect. The costumes were lovely and true to the era and the acting was superb. If you ever get the chance to see this play go along, you won't regret it.