With or Without You on a Grey January Morning

I was driving to work in my car earlier this week, the weather was wet and grey and I was still half asleep and weary (I'm not at my best early mornings). Sitting at the traffic lights, watching the windscreen wipers sweep the rain away, we'd just passed what they say is the most depressing day of the year, January 21st, and I thought how much I hated January.

I sighed, reached over and put on the radio. A familiar sound rang out, the opening chords of With or Without You. I put the volume up and the song enveloped me, Bono's oh so familiar soaring voice, Edge's magical guitar that was as versatile as the voice, both melding together perfectly, and Larry and Edge holding it all together.

With or Without You has always been in my U2 top 5. It's over twenty years old yet is as fresh as the day it was first heard. And when it was released it was totally different from anything else at the time. Live it is always stunning and at some concerts it's made me cry, sometimes the song is sung to the audience, sometimes the rest of the band, sometimes Ali, sometimes to Bono sings it for himself. It has so many levels, so many meanings and each of us can take away something different from it.

Though U2 have been a part of my life for twenty four years, sometimes I go for quite a while not listening to their music. Then I'll hear one of their songs on the radio, TV or in a shop and I'll feel that warm familiarity and once again realise just what fantastic songs U2 have written and why I've been a fan for so long. I'll feel moved and inspired by the music once more. That's just what happened that grey morning, the clouds had lifted and by time I got to work the world felt a better place than it had when I pulled up at those traffic lights!

Email ThisBlogThis!Share to TwitterShare to FacebookShare to Pinterest
Labels: U2, With or Without You

The headline caught my eye on the BBC news webpage "Craggy islands row over Father Ted". It was about the Father Ted Festival, I'd never heard of it, so was intrigued. The warring islands, Inis Moor and Inis Oirr could have come straight out of one of the Father Ted storylines. I loved Father Ted and the Festival sounds great fun, full of the hilarious, irreverant humour that typified the series - brilliant! My only reservation would be going to the Aran Islands in February ....... brrrrr!

U2 at the premiere of U23D at the Sundance Festival 19th January - I just burst out laughing when I saw this photo, Edge and Larry look a bit shifty! Neat shades though
Posted by Sue Fell at 14:34 No comments:

Email ThisBlogThis!Share to TwitterShare to FacebookShare to Pinterest
Labels: Sundance, U2, U23D Premiere

Well, after many emails and phone calls the hotel's booked, travel sorted and tickets bought and now it's just a case of waiting for the 22nd February - that's when my friends Debbi, Dawn and I go to Manchester to see U23D. So far all the reviews I've read have been very positive and they just go to whet the appetite even more! One review especially impressed me and you can read it here.

This morning, The Feed had the opportunity to screen the new concert film U23D, a 3-D movie featuring Irish megastars U2, which comes out in a limited run in theaters on January 23rd. So, we strapped on the glasses and took a look, and here's what we saw. First off, the 3-D was amazing. The technology, developed by 3ality Digital, really took3-D in a whole new direction, giving live action with steadicam, robotic cameras, aerial footage, and visual effects all in three gorgeous dimensions, which is something that filmmakers have yet to be able to accomplish. Until now.

The footage was crisp and clear, well shot and edited, and, under the direction of Catherine Owens, who designed the groundbreaking "ZooTV"tour for U2, and Mark Pellington (Arlington Road, The Mothman Prophecies), was compelling and never dragged for the 85-minute running time of the film. Of the shows, seven of which were filmed to make the movie, all from the How To Dismantle An Atomic Bomb Tour, the concept is amazing, with gigantic LCD screens behind the band, allowing for live-action stuff, as well as any number of text and video effects.

Now, about U2 and the music itself. It would be easy to dismiss Bono as a silly, larger-than-life, way-too-occupied-with-himself rock star, such as the recent portrayal of him on South Park. However, if Bono didn't exist, we would have to invent him. That is to say, what is music, or art in general for that matter, without a bleeding, messy heart at its center? Bono is the heart of rock and roll these days, and he knows his part as a showman, a shaman, and a spokesman as well as anyone in the business. That he is able to gather the cojones to be Bono at his most earnest each and every night is an accomplishment in itself.

But let's not discount the fact that the man can still sing, even at his age, almost as well as he did when he was a kid. Whether it's the howling anger of songs like "Sunday, Bloody Sunday," or "Bullet The Blue Sky," or the heartfelt balladry required to muster up "One" or "With Or Without You," it doesn't sound like he's lost a step, musically. In fact, he even pulled off a decent Pavarotti, singing the late tenor's part from the overlooked "Miss Sarajevo," from the critically overlooked Passengers: Original Soundtracks 1 album the band did as an escape from being U2 for a while, back in 1995.

Maybe the best thing about this entire experience is that it brings you close enough to the band for you to realize that being in perhaps the biggest band in the world is actually fun. You get so caught up in the fact that U2 are into heavy subjects that you forget that it's just four guys that enjoy rocking out together, and who really love toplay music. This is easily the best thing about the movie, and it makes you like the band all the more.

As always, The Edge is a searing guitarist, who works one groove, but works it really well, and Larry Mullen, Jr. can pound some skins, and is especially compelling with just a cymbal and a floor tom, out at the most remote outpost of the stage during "Love and Peace." But, also as always, it's Adam Clayton who's the secret weapon in this band, assuming a Clash-like stance and pounding out crushing basslines that make these songs run.

Would we have liked a bit of a different setlist? Yeah. The show was a little heavy on greatest hits and songs you felt like they had to play. However, the movie was only 85 minutes, and we're pretty sure there was at least another hour's worth of material the production team decided to leave out. Still, it's a small gripe.

In the end, you will be impressed with the 3-D, and, if you're inclined at all, with U2 in general. This is a fine, groundbreaking snapshot of a band that's been on top for a long, long time, and still know how to deliver the goods.

Email ThisBlogThis!Share to TwitterShare to FacebookShare to Pinterest
Labels: U2, U23D

I have always been an avid photographer and over the years my collection has become massive and crept into more albums, boxes, drawers..... With the New Year I decided to de-clutter and get rid of at least half of them. I started that mammoth task over the weekend and it is on-going.
As I looked through them they brought back all kinds of memories. Some of the first ones were of a school trip we had to Stratford on Avon. Until then I'd thought Shakespeare was boring and went on the trip just to get away with my friends - I'd never been on holiday without my parents. But much to my surprise I sat transfixed in the theatre, as I watched those words come to life so eloquently. All life was there on the stage, laughter, tears, love, treachery, jealousy, magic, poetry, music. That trip gave me more than I would ever have guessed - it opened up the world of great writing and theatre for me, a love I have to this day.
Schoolfriends, and two of them are still close and dear friends, that's special.
Photos, photos, photos. Pictures from my adventurous times when I worked abroad in France and Canada. Looking back I was really brave to go overseas like that alone to work, at the time though it was just something I felt I had to do. Ahh the courage of youth! I'm glad I did do it, now I can look back and say I did do something different with my life in my younger days and not have the "if only" regrets.
More photos. People who have passed away, my mother looking young and very beautiful, dear friends Joan and Ann, taken before their time.

Boyfriends, wonder where they are now?
Lots of photos of U2 on stage and off stage, part of the backdrop to my life for 24 years. And through my interest in them I've travelled far and wide, had many adventures and met people from all over the world. Some have become real friends, people I would never have met if it hadn't been for our mutual love of U2. 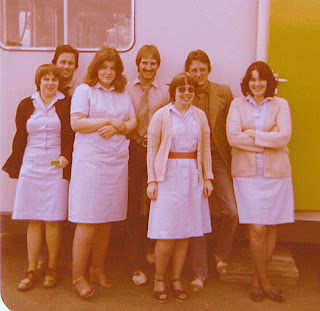 Holidays, day trips, pets, friends, family, the backdrop to my life in photos. But one photo stuck out for me. I can't even remember it being taken. It's photo of me and my fellow student nurses taken in 1980 just before we qualified as Staff Nurses. I'm the small one in the front with the tinted glasses and Purdy haircut!

It was quite a poignant photo for me as it marks the beginning of my career as a nurse. And now here I am in 2008 in the year of my (early!) retirement from nursing. The beginning and the end. I was quite surprised that it struck me like that as I am looking forward to retiring. Maybe it's moreso the realisation that a whole generation has passed since the photo was taken, and how quickly life passes by.
Posted by Sue Fell at 23:20 1 comment:

Happy New Year to you!

I know it's a bit of a cliche but I'm going to lose weight! I've signed on with Weightwatchers, Thursday is weigh-in day and I am really motivated. I feel stodgy and clothes are tight, and also, being of "middle years" I know it's not good for my health to be overweight. I'll never be slim, never have been, and don't need to be, but I just want to lose a couple of stones and feel better physically. I'll be blogging some updates every now and then.
Posted by Sue Fell at 21:25 2 comments: