My friend Marian and I went to visit The Art of Remembering exhibition at the Rheged Centre recently. Funded by the Arts Council England and the Heritage Lottery fund it is described on Rheged's website in the following words:

The Art of Remembering is a new contemporary art exhibition supported by Arts Council England and the Heritage Lottery Fund, and developed by Rheged. It asks what emotional connection remains to the First World War, and looks at how we have memorialised the conflict over the past 100 years. The exhibition features new work by artists selected from a national call out and it includes four new artworks commissioned by Rheged especially for the occasion. The Art of Remembering asks questions about how we remember events collectively, and re-evaluate our moral and patriotic attitudes over time.

It was a small exhibition using many mediums, ceramics, needlework, film, artwork and more. The first thing that caught my eye when I went in was a scarlet coloured crashed plane, this sculpture is called Downed by Al Johnson. Only when I got close to the sculpture I saw that the scarlet was made up of squares of knitting. It was quite a contrast, the blood red killing machine covered in soft fabric. The artist says that the piece 'references the cultural shifts in the perception of women, moving from the domestic sphere to munitions factory'. And is this area, skirting the English/Scottish border, there was indeed a massive munitions factory 12 miles long, with mainly female workers doing the dangerous work.

Another piece that caught my attention was some large fabric hearts called Sweethearts by Morwenna Catt. They hung on parachute-like cords from the ceiling and brought to mind the much smaller sweetheart cushions that recuperating soldiers used to make. They were made from vintage fabrics and pieces of soldiers' uniforms, some were embroidered with patterns and words. Black threads trailed to the floor from them like bleeding hearts, or threads of stories from 100 years ago....

I found it quite moving as I walked through the sweethearts and read what was embroidered on them. One had a Union Jack background with a photo-like image of three soldiers aiming rifles, 'Shot at Dawn' was embroidered on it in red. 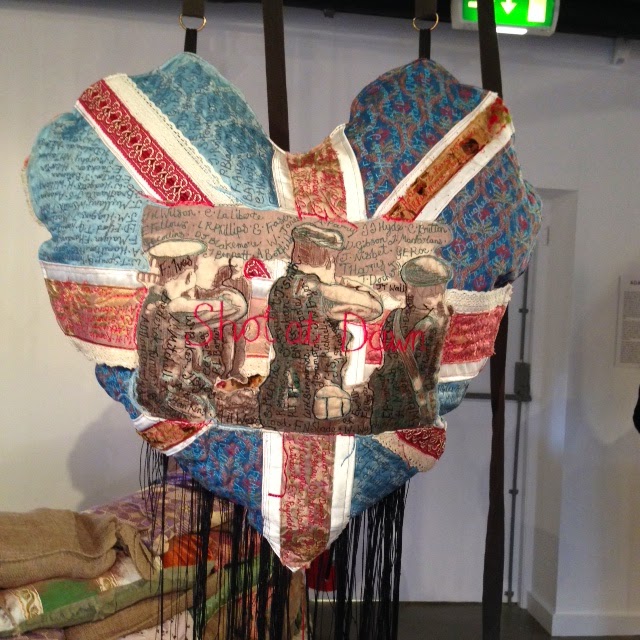 Another piece that caught my imagination was Tails You Lose by Dawn Cole. It was monochrome, in the form of a wreath, like those laid on Remembrance Day, but made up of hundreds of heated-treated foil and paper shillings instead of poppies, with wispy black threads hanging from it.

This work again was inspired by a relative of the artist, her great aunt, Clarice Spratling, whose diary had been found in an attic. Clarice was a nurse who joined the war effort and wrote about it in her diary. She had to pay one shilling to go, this reminded the artist of the King's Shilling when soldiers used to be paid a shilling to join up, though this had stopped by World War One. But during her research in Wimereux where Clarice was posted she found a headstone that had a rubbing of a 1915 shilling on top of it. I thought it was beautiful in it's
simplicity in silver and black and the interesting and moving story behind it. It reminded me that it was not just men and soldiers that went to war.

I enjoyed the whole exhibition, but have just picked my favourite pieces of work to fully review. It is interesting to note that most of the exhibitors were female.

I found The Art of Remembering very moving and it made me think and maybe understand just a little of what my grandfather and his brothers (one who did not survive) must have gone through. I think one of the things this exhibition was aiming to do was just that, make us think and remember. This was such a terrible war that it still affects us one hundred years later and changed the world forever.

If you want to see this free exhibition (you also get an excellent free catalogue) you haven't long to get there though, it closes on November 23rd. My friend Marian was staying with me for a while and we decided to visit Rheged. We were hungry
so decided to try chef Peter Sidwell's cafe there. It was quite small, but inviting. The menu was good with some more unusual items such a frittata, Persian lamb and cullen skink salmon on it and was reasonably priced.

For a while we just sat at our table waiting to be served, however you have to go to the counter to order, it would have been helpful to have a sign or state that on the menu to avoid confusion. As we were going out for a meal that night we didn't want something too big so both plumped for the Red Pepper and Feta Frittata topped with a Tomato and Herb Salad.When it arrived it was huge, light and fluffy and totally delicious, definitely the best frittata I've ever had. It was so big we both could not finish it all. I looked around at the other dishes arriving at tables and the food was of generous proportions and looked very good.

To sum up this was a cafe with some unusual dishes most of which had local ingredients. No dish on the lunch menu was more than £9.95 (our frittata was only £6.95). The quality of our food was excellent and it was perfectly cooked, we hadn't really expected such quality here. If you are visiting Rheged, it's well worth a visit.
Posted by Sue Fell at 20:16 No comments:

We had nowhere planned to eat on our second night in Bordeaux, but close to our apartment we saw a place down a nearby street that looked busy (always a good sign) so we had a look. L'Alysson Brasserie  was reasonably priced and it looked a nice place so we decided to try it. Again we decided to sit outside, a waitress came up to us and said, "You can sit 'ere, 'ere, or 'ere" pointing to various tables. However after sitting for a few minutes we realised it was a bit colder than the previous night so we decided to go inside. The waitress came along and went through the same routine, "You can sit 'ere, 'ere, or 'ere." We chose a table, I noticed the floor inside was covered in beautiful tiles.

We ended up ordering the same things. We had goats cheese on ciabatta as our entree. It was a large portion, a stack of two pieces of ciabatta with two large portions of goats cheese and a slice of ham, salad with half a boiled egg all sprinkled with roasted almonds. It was very good - and filling!

For the main course we had a ribeye steak with frites, onions and salad. The steak was huge and the pile of fries would have kept me going for a few days I'm sure! The steak was very tender and cooked perfectly. I've got a good appetite but I couldn't finish the meal, nor could Debbi. We washed it down with a bottle of wine called Nodez which was better than the one we had the previous night. The desserts looked fantastic but unfortunately we had not the slightest bit of room for one!

The food was good, nothing fancy, but good plain cooking and there's nothing wrong with that. Service was friendly and the ambiance was relaxed and comfortable. It was also reasonably priced - around half the cost of Le Bordeaux where we had dined the previous night. We both enjoyed our evening there very much.

This restaurant is situated in The Grand Hotel de Bordeaux in the centre of the city and has seating inside and outside, as it was a balmy late September evening Debbi and I decided to sit outside.

We were given a menu in both French and English and while we perused it a huge basket of bread was placed on the table. We both ended up having the same for each course, (not something we normally do) starting with a volute of creamy cep with flowing egg (think that meant having a runny yolk!) with Bordelaise sauce and ginger croutons. It was rich and delicious.

For the main we had Rolled and stuffed Faverolle chicken with garlic porcini and chanterelle mushrooms, countryside bacon and fresh hazelnuts. Again it was very good, though I could have done with some potatoes with it. We were getting a bit mushroomed out, but it was lovely!

Dessert was a pistachio mousse, reconstituted pistachios, confit raspberries, fresh raspberries, a pistachio crumb and a sugar flower. It was a work of art on a plate and it seemed a shame to destroy the it. It was a fabulous dessert, a perfect combination of tangy raspberries and sweet mousse.

We had chosen one of the cheaper wines to accompany the meal, it was ok but not really to our taste.
I know it's sacrilege, but, shhh, we are not the biggest fans of French red wine.

The service was friendly and efficient and courses came with just the right timing. The bread was refilled regularly, wish they would do that here!

The ambiance was perfect, the beautiful Opera was all lit up opposite, a busker was singing in English nearby and it was a perfect place to people-watch. It was so relaxing just to soak in the French atmosphere of the place that we both love so much. Seats were comfortable and the tables were well spaced to give privacy.

Le Bordeaux is an expensive restaurant, normally well beyond our means, but we decided to treat ourselves that night and didn't regret doing so.

Website: Le Bordeaux
Posted by Sue Fell at 21:52 No comments: