U2 On The Late Late Show

U2 appeared on the Last Late Late Show to be hosted by Pat Kenny yesterday evening. They performed Magnificent followed by a short interview, watch the appearance below.

U2 At Island Records 50th Bash

U2 made a surprise appearance on Thursday at the concert to celebrate Island Records 50th anniversary. They performed "One" with African artist Baaba Maal, and then Bono and Maal singing a short version of Bob Marley's "One Love." To finish U2 played Vertigo.

Brilliant photos here
Posted by Sue Fell at 12:12 No comments:

Whenever I put the news on these days it's all full of more stories of how our thieving Ministers of Parliament have used their "expenses" (funded by the public taxes) to buy things such essential items as duck houses, or paying for cleaning a moat (well everyone has one of those don't they?) or paying a mortgage that is already paid off. There's something rotten at the heart of our government and it really pisses me off. So, it was lovely to read the story below which made me laugh, a thieving dog rather than MP!


A 999 operator worriedly returned a call from a suspected domestic violence victim only to discover that the caller was a dog that had stolen its owner's phone. Officers traced the call, in which a man was heard screaming "Come out or else, I'm warning you", to Jodie Halfpenny's house in Withington, Herefordshire.

The operator, from West Mercia Police, immediately returned the call thinking that the caller might have been attacked after a muffled whine was heard before the line went dead. But Miss Halfpenny, 20, answered and revealed that the call had been made by mistake – by her 14 month-old golden retriever Bailey.

Bailey had made the call inadvertently after making off with the phone and repeatedly biting down on the number 9 digit. The muffled voices were Jodie and a male friend, who chased the dog behind their garden shed before wrestling the phone from Bailey's jaws at 4.30pm on Monday.

A West Mercia Police spokesman said: "We received a call from in which the operator became concerned after muffled shouts and screams were heard on the line. An operator phoned the number back hesitantly, only to be greeted by a very apologetic woman who confirmed that all was well and that the culprit was not her husband – but the dog."

"After discussing the situation at length, we were satisfied the call was made by the dog and there was no danger." He added: "You just couldn't make something like this up."

Geez, it'll take over the world!

Email ThisBlogThis!Share to TwitterShare to FacebookShare to Pinterest
Labels: The Claw, U2, U2 360 Tour

I noticed today that Magnificent has only reached 42 in the UK singles charts since it's release. What a shame, such a wonderful song has fallen below the radar. Some of the blame must rest with U2's PR, there was little promotion on it's release and of course the video came out after the single which is madness - plus that video was not an attention grabber. I have rarely even heard the song being played on the radio.

Another possible reason for the low chart position is that, to my knowledge, this is the first U2 single not released on CD in the UK. I know downloading music is what a lot of people do nowadays (including myself), but also there are still many - often older people who form a large proportion of U2's fans - who still prefer to buy CDs. Maybe this was a mis-calculation on the record company's part. And it's not just the UK, the song has performed badly pretty much worldwide.

Of course chart positions are not everything, Magnificent is a fabulous song no matter where it gets to in the charts. But it makes me wonder what lies in store for the band in the future, something I've been thinking about a lot recently and will write more about soon.
Posted by Sue Fell at 11:42 3 comments:

Be still my beating heart! In an interview in Rolling Stone Edge discusses ideas the band are discussing re songs to play on the tour. I'd be in heaven if they play Luminous Times! The whole concept sounds fabulous.

"We're talking about resurrecting songs we haven't played in a long time. I have a list of every U2 song -- some I can't remember anymore -- even some of the B-sides that we've never played live. We were thinking how much fun it would be to play something like 'Luminous Times.' Certain songs from the last couple of tours, we may not play again. We want to find songs that feel fresh and valid."

Here's a photo of The Claw taken by Bart Mot as it was being built in Wechter, Belgium. It looks massive, but not as high as I imagined, though this may just be the upper section that's fitted onto a lower part. Quite an ugly thing, and surely it will block the view for some people?
Posted by Sue Fell at 19:18 No comments:

Email ThisBlogThis!Share to TwitterShare to FacebookShare to Pinterest
Labels: The Claw, U2 360 Tour 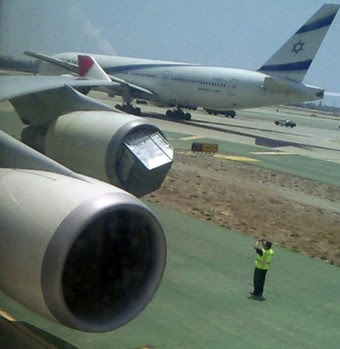 A Japan Airlines Boeing 747, with 245 passengers on board, sucked up a large metal baggage container as the plane prepared to depart from Los Angeles International Airport yesterday.
Japan Airlines Flight 61 to Narita had been preparing to leave the airport about 1.30pm (LA time) and was pushing back from the terminal gate when the incident occurred.
Carol Van Schellen, an Australian woman on board the flight, said she was waiting for the plane to taxi down the runway when she noticed police cars suddenly appear on the ground before the aircraft.
“I noticed there were police cars escorting us and I thought: ‘hmmm that’s strange',” she told Melbourne’s 3AW radio station.
“But they were actually trying to stop us I think and I looked out the window and there was a big luggage container sitting in the engine. I don’t know why the pilot hadn't noticed it but I think we were about ready to go and he announced that we had a "slight problem with engine no 1.”
Federal Aviation Administration spokesman Ian Gregor said a baggage cart – which may have been parked too close to the plane - was being towed at the same time and the engine ingested one of the containers, forcing it to become lodged in the outer left-side engine of the four-engine jet. The vacuum created by the engines preparing for take-off was so strong it sucked up the metal container, which measures approximately 5 feet by 5 feet by 4 feet.
The 245 passengers and 18 crew members were taken back to the terminal where alternative flight arrangements were made for them. (Taken from Mail Online)
"Slight problem" is a bit of an understatment!
Posted by Sue Fell at 20:58 1 comment: 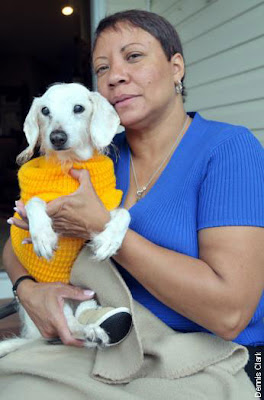 "She used to run three miles with me every day," said Shaughnessy, a high-school principal's secretary who adopted Chanel from a Virginia shelter as a 6-week-old pup. "She still enjoys a walk, but now she's carried for a lot of it."
Posted by Sue Fell at 16:42 No comments:

Here's the video for Magnificent. It's not bad, it's always nice to have close ups of the band
Posted by Sue Fell at 15:55 2 comments:

Email ThisBlogThis!Share to TwitterShare to FacebookShare to Pinterest
Labels: Fez, Get On Your Boots, Magnificent, U2

On May 13th BBC Radio 4 will be broadcasting a recording of Bono reading his poem about Elvis, American David. This isn't something new, it was written in 1995 and recorded at a BBC interview in 2004 but never broadcast at the time. There's more info about it here

Personally, in all honesty I'm not impressed, read it here and see what you think.
Posted by Sue Fell at 11:55 4 comments:

Two intelligent, caring and gorgeous men in conversation on CNN, a treat, watch Bono's interview with George Clooney here
Posted by Sue Fell at 16:46 No comments: