The other week my cousin Janet and I visited the Lake District Wildlife Park for their Keeper Experience. The drive was lovely, the Lake District looked so beautiful in the morning light of the sunny spring day with it's lush green foliage and spring flowers adding to the stunning landscape.

We were greeted at reception by our keeper (I've forgotten her name but she was really lovely) and she told us a bit about the Park and how it plays an important part in animal conservation and works in conjunction with other zoos lending animals for breeding.

She then took us to meet the tapirs for their morning grooming session. We went in with Muffin and her son Zeke, they were very friendly and keen to be groomed. Both quickly went into raptures during grooming, first closing their eyes and then lying down, totally relaxed. Apparently tapirs are related to horses and hippos, I thought thy might be related to elephants because of their long, flexible nose. It was special to be able to be so close to an animal like this, they are so wonderful. 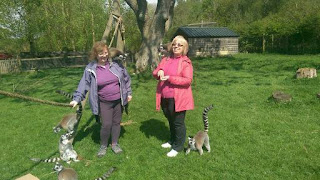 After grooming the tapirs we went to a hut to prepare fruit and vegetables for the meerkats and ring-tailed lemurs. It was a combination of bananas, sweet potato, apples among other things.

We had to get into the meerkat enclosure quickly as they get very excited at feeding time. There were fourteen animals, but only thirteen were out and about, apparently one female was due to have babies, the keeper said she was probably in her burrow having given birth. The meerkats were smaller than I thought they would be and quite flighty. After a while they plucked up the courage and jumped onto our knees and for the food, all the time chattering away. 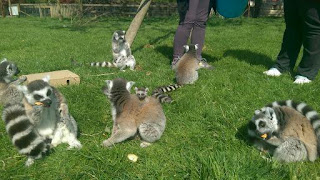 We then went on to our final group of animals, the endangered ring-tailed lemurs. They were beautiful, with thick black and white fur and rings of it on their long tails, their faces reminded me a bit of a raccoon. They were a lot more confident than the meerkats and quickly jumped on our shoulders and arms. There were a couple of mums with their babies clinging to their backs, one with twins had one clinging underneath too. They especially liked the banana and would sift through the food you had looking for it.

And so that was the end of our Keeper Experience, and we both thoroughly enjoyed it. We then looked a round the rest of the park and watched a bird of prey demonstration in which an eagle called Uni decided that she'd had enough and flew off to a tree for a while! Interestingly, during the demonstration a wild peregrine falcon flew over head being chased by two crows who must have been protecting their nest.

All in all it was a good day, the Animal Park is small and the animals look healthy and happy and well cared for and of course the conservation aspect of the park is vital nowadays. I would really recommend this Keeper Experience, it costs £35.00 and that includes the normal admission fee of £8.95. There are other animal experiences that you can do as well, all the same price.