Iceland 3 - The Wonders of Snaefellsness

Our last full day in Iceland and we had an all day tour of the Snaefellsnes peninsula to look forward to.  It was a very early start but we were soon on our way in a small coach. We had a comfort stop at Borganes around 10am and it was just getting light. We then crossed over the landside of the peninsula, stopped for a while on a beautiful high plain surrounded by mountains.

We then crossed to the northern side of the peninsula with amazing scenery everywhere. A lot of the mountain sides had frozen waterfalls/streams creating beautiful ice sculptures. We passed through the small village of Grundarfjordur and close by was the striking mountain, Kirkjufell  (Church Mountain) which was situated on a piece of land that juts out into the sea.  I've seen lots of pictures of this stunning mountain and have even painted it from a photo. In real life, covered in snow, it is even more wonderful! We were blessed with good weather and seeing it backed by the unique blue, milky yellow skies of Iceland it was just perfect! The snow was quite deep in places so we didn't get to the nearby waterfall but I was quite happy just gazing at this beautiful mountain. The fact that there were not many tourists there and lovely and peaceful added to the mood of the place. 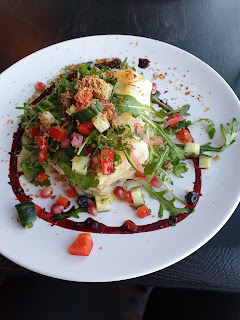 We then followed the northern coast to a small village called Olafsvik where we stopped at a restaurant called Sker for our lunch. It was a small modern place that had water decanters in the shape of fish! We had a table beside the window that looked out to a small harbour. For lunch we had the best cod I've had (very recently caught) done with vegetables and berries, delicious, I love how Nordic countries use berries in their food! As we left after the meal I saw the very modern and unusual church nearby.

We drove on and entered the Snæfellsjökull National Park which is at the western tip of the peninsula. We stopped at Saxhólar a conical crater just off the road. To the left was the Snæfellsjökull gleaming white in the sunshine. There were steps to the top of the crater but they were covered in snow and ice so we didn't go up. It was very windy and cold there but also very beautiful, I was glad I had bought the hat the day before as I felt cosy with it on.

We then drove on to Djúpalónssandur which was an area of amazing lava formations, columns and cliffs with a black beach. There was time to wander around and soak in the scenery.

We then went on to to Arnarstapi a very small community by the sea. Some people walked along the beach  but I went and looked at the harbour which our guide said was part natural and part man-built. to the north of it lava cliffs stretched along the coast. All these places were blissfully quiet with few tourists.

Our last stop was the famous black church at Budir. It is on a lava field close to the sea flanked by snowy mountains. It was starting to get dark when we arrived and there was that rich blue light you get at twilight in the north which made it very atmospheric. The church is tiny, black with a white door and window frames. It, and the small graveyard beside it, is surrounded by a low stone wall.  I loved it there, it was almost magical.

That was the last stop of the tour, we then headed back towards Reykjavik. On the way our guide told us about the only Icelandic serial killer. A man many, many years ago who used to ambush travellers passing through a narrow valley.

The tour was fantastic, it confirmed to me once more what an amazing country Iceland is. Reykjavik is a modern, busy city with a delightful quirkiness. Once you get out of the city you are soon in real wilderness where nature is still in charge and I love that.  We were going home the next day but I know I will be back one day.