Well, The Wedding has taken place.  It is a public holiday in the UK, but I was working and so watched it with one of the old ladies I visit.  Neither of us are particularly into the royal family, but there's no denying William and Catherine  are a lovely young couple so obviously in love. It was so sweet when William said, "You look beautiful" when Catherine arrived at his side in Westminster Abbey. I loved her elegant dress, classic and a touch of the medieval about it, just what I expected from her.  And I must say William looked very handsome in his Irish Guards uniform.  The British are very good at putting on a traditional pageant and it all was very grand and went perfectly.  I loved the trees in Westminster Abbey, it was so different and a brilliant idea, nature in the city.  I remember watching Charles and Diana getting married 30 (yikes, how time flies!!!) years ago and it felt very different, more formal and without the obvious love.

I think in these hard financial times the country needs something to celebrate and enjoy and this wedding has come at the perfect time.  It is nice to be happy about something when the news these days is normally full of gloom and doom - even for non-royalists!   I am amazed by the degree of international interest in The Wedding, the Americans especially seem so into it.  There were worldwide best wishes which included the Dalai Lama, and even out of this world best wishes from the International Space Station!

In the future William and Catherine will be King and Queen of the UK.   There are signs that they will herald a new era of royality in this country.  A royality that is less formal and more in touch with the people, and that can only be a good thing - and maybe I'll end up becoming a real royalist then!
Posted by Sue Fell at 20:43 No comments: 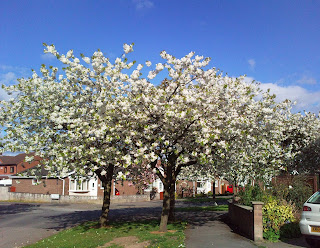 Well no, but it feels like summer anyway!  Our wonderful weather continues with sunshine and temperatures way above normal - my car thermometer showed a high of 20 degrees centigrade to day.  The blossom is out early, near me there are lots of trees covered in pink and white blossom, so beautiful.  Let's hope this bodes well for the real summer months.

I've been busy in the garden tidying up the autumn/winter debris, putting in the bedding plants.  Also started my vegetable gardening, got the potatoes in,  planted new a new apple tree and raspberry bush. Tomatoes, beans and onions going in soon.  I've grown to love gardening, there's a real sense of satisfaction of seeing what you plant grow and bloom.  And there is nothing like eating your own home grown food!  You get fresh air and exercise too, so it's a winner all round!
Posted by Sue Fell at 22:46 No comments:

Email ThisBlogThis!Share to TwitterShare to FacebookShare to Pinterest
Labels: Gardening

After the gig on the 13th U2 went to the Bar Secreto in Sao Paulo for a bit of karaoke.  Nice to see the lads relaxing and having fun - Larry definitely wins for enthusiasm LOL!

For the first time I watched a live feed of a U2 show, it was from Sao Paulo in Brazil, isn't technology amazing?  Not perfect though as the feed died about halfway through the gig, still, it was good while it lasted!  But, hey, what a night ,what a show, what a ZOOROPA!  Yes, they played Zooropa, which has hardly ever been played - in fact I think (though could be wrong) it was only played live in the UK, twice in London and once in Glasgow and I was there!  Fabulous to hear it again and very brave of the band to do it as it is a lesser known track and not a particularly commercial song.  But songs don't have to be commercial to be good do they? It took me back to those wonderful Zoo days, a time of brave, daring new songs and clever, entrancing gigs, a brilliant time to be a U2 fan, ahh memories!

But Zooropa wasn't all that was special about this gig, it was generally a great set list with Even Better Than the Real Thing, Out of Control and North Star were also played amongst the usual songs.  One of those gigs you wish you were at! Please, please U2 play Zooropa at one of the Canadian shows in July and I'll be in heaven!

PS Apparently Zooropa was trending on Twitter, amazing, and amazing that I now know what trending is lol!

I have a friend, Alison,  who lives in the beautiful Scottish Borders and about once a month we meet up at some point between where we live.  This month our meeting place was Hawick, an ancient mill town famous for its cashmere and the Pringle label.  It is the largest of the many mill towns in this area which was the perfect location for weaving due to it's fast flowing rivers, being on the main road (and later railway) between Carlisle and Edinburgh and having ideal grazing for sheep on the surrounding mountains.

We first went to Beanscene cafe for lunch.   It's pleasant place, a light, airy modern building within an old Tower Mill building, some tables look out over the millrace.  Part of the ground floor is glass and you can see the old waterwheel still in place there.  The Kenneth McAllister Quartet was playing jazz.  Now, neither of us are big fans of jazz, especially the singing, but the music was not too loud and luckily there was only a little singing.  It made a nice change.

Afterwards we headed out to explore the town a little.  Just behind Beanscene is the Turnbull statue.  Turnbull is the prominent local name and the family was one of the main Reiver families of the Border country, also known as the debatable lands.  The statue was impressive, a man grappling a bull by the horns.

We went on to the town's main street and came across the Borders Textile Towerhouse Museum, The Knitwear and Textile story.  The museum is in a beautifully restored building, part of which is Drumlanrig Tower, built in the 16th century by the Douglas family and is the oldest building in Hawick.  The rest of the building was previously the Tower Hotel until that closed and became derelict.  The £10 million Heart of Hawick project saved the building and created the museum.

It tells the story of weaving in the town, with parts of machinery on show, audio-visual programmes, photos and interactive displays.  It also looks at the future of textiles and there are examples of work done by students at the acclaimed School of Textiles and Design in the town. The old photos show many mills and smoking chimneys in Hawick during the boom time for textile production, people at work at the looms, factory parties etc.

One thing I remembered from the exhibition that had nothing at all to do with the mills was the uglie bonnet.  A strange hat with a wired, wide brim over the face worn by female agricultural workers to shield them from the sun.  They were not very fetching hence the name LOL!  All in all, it was a small, but interesting museum.

We walked down the main street of the town, most of the shops were shut as it was a Sunday and as this is a relatively small town that's quite normal.  We passed the lovely Town Hall with all it's turrets. Then, at the Memorial statue (which commemorates the victory of local youths over English raiders just outside of Hawick in 1514.  the English flag was captured and taken back to the town) we turned left and walked along the banks of the fast flowing River Teviot back towards the car park.  The sun was shining, the sky was blue and the wind strong, bracing - good fresh air!

Hawick is a town I've passed through many times, but this is the first time I've taken time to walk around it.  It obviously has had recent difficult times with demise of mills which then became derelict, they couldn't compete with overseas competition.  But the Heart of Hawick scheme seems to working well for the town as some of those wonderful old buildings have been beautifully renovated and have moved into the 21st century benefiting both local people and visitors alike.  It's always good to see old and new managing to live alongside each other in this way, well done Hawick!
Posted by Sue Fell at 15:58 No comments:

Bono's Driving to Midnight Mass Poem - the Inside Story

I've always loved this poem, and now thanks to @U2 we can hear how it all came about.

Bono's Driving to Midnight Mass Poem the Inside Story
Posted by Sue Fell at 18:36 No comments: 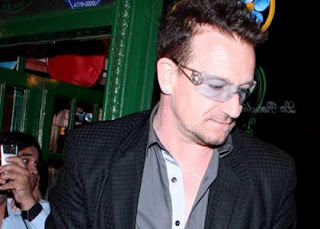 Bono trying to have a quiet meal out whilst on tour in Argentina.  Of course that's impossible for him and fans and photographers were waiting for his exit from the restaurant.   What a strange way to live your life, always recognised, never anonymous.

Must say though the B-man is looking pretty good for nearly 51!


More photos at the following link Bono's Meal Out in Argentina
Posted by Sue Fell at 21:53 1 comment: