LIttle Italy and Springsteen in Dumfries 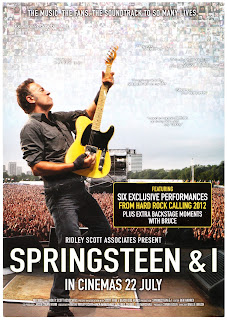 In September I've got a special birthday coming up, I can hardly believe it, but I'll be 60! The strange thing about getting older is that inside you feel much as you did decades earlier, it's just your body getting older, and it feels odd to think I'm the age I am now lol!  I'm having a little birthday bash in Dublin in October and have invited various people close to me. I asked my friend Dawn but she wasn't able to make it, but then she surprised me by treating me to a meal out and the Springsteen film as a very early birthday pressie.  I was very touched at her thoughtfulness, I am blessed with fabulous friends!

So, yesterday July 22nd was the evening. I drove through the afternoon heat to Dumfries, 37 miles from where I live, unfortunately my car's air con decided to stop working at the start of this hot spell!! I arrived at Dawn's and cooled down with an ice lolly lol. We then set off for the restaurant, Little Italy, a lovely place with a large outside eating area. It was cooling a little now and they had big umbrellas for shade so we sat on outside decked area. We had a gorgeous meal of tomato, garlic and pesto bruschetta followed by a wild mushroom pizza. We took our time and caught up on each others news as we ate, we are never short of chat!  It was great to eat outside in the balmy evening air.

We left and headed towards the venue, parking beside the River Nith and the oldest bridge in Dumfries, the Devorgilla Bridge named after Devrogilla, Lady of Galloway who was the mother of John Balliol, born 1249. The bridge is very old, made of the local red sandstone, at one end is the Old Bridge House, built 1660, which is now a little museum. Dawn said it is really good to visit, it has rooms from past centuries and an old dentists surgery! We made a note to visit it together one day.

We walked by the river, which was very low due to no rain for weeks, and on to The Robert Burns Centre where the film was being shown.  We went into the very small and very warm cinema there and settled into our seats. I'm a Springsteen fan, actually have been longer than a U2 fan which is amazing! But I haven't seen as many of his shows etc. Dawn isn't a fan, and I appreciated her suggesting this evening all the more because of that.

The film was mainly self-videoed footage of fans talking about the influence Springsteen and his music has had on their lives. It was emotional, moving and funny.  One man talked about the music and what it meant to him and was overcome with emotion and ended up sobbing. One of the funniest for me was a British couple, the wife a fan, the long-suffering husband not. The husband (a natural comedian) was the one filmed and one of the things he berated Bruce was for his considerately long shows!

Some of the best segments were when fans' stories were backed up by footage. Like the young British girl who held up a sign saying  "I'll be your Courtney Cox" (referring to the Dancing in the Dark) video. And Bruce got her on-stage to dance with him for that song, her joy and excitement was palpable.

Another was an Elvis impersonator who went to the gig in full Elvis gear and was pulled on-stage to sing Elvis songs with The Boss and managed to take over the show for a few minutes and pull a ham-string in the process! Bruce dubbed him the Philadelphia Elvis. It was great to hear how it felt for these fans to have their dreams come true. Another man was dumped by his girlfriend the night before the gig so he took a sign saying he had been dumped and Bruce got him on-stage and gave him a big hug, you could see the healing on the devastated man's face, which was very lovely. Bruce said he'd been dumped a lot and that, "They are regretting it now!"

The close relationship Bruce has with his audience came across well, and it is understandable that he has a huge loyal fanbase.  People feel he is talking about them in his songs, ordinary people sometimes feel they don't have a voice, well Bruce is their voice. I'm a fan, not a mega fan, but if I'm struggling with something I often listen to Badlands and it lifts me up, music can be so powerful.

Live performances from throughout Bruce's long career were interspersed with the fans' stories, though sometimes I wanted to see a bit more of certain performances than was shown. Personally I found the film sometimes made me laugh, made me want to get up and dance, other times it made me quite emotional. The live performance of Blood Brothers was stunning.

There was a 15 minute segment of live footage from Hard Rock Calling 2012 in London at the end. Really good to see Because the Night, love that song, and Nils Lofgren's whirling dervish guitar solo was amazing. Paul McCartney joined Bruce for I Saw Her Standing There and Twist and Shout. As usual Bruce was ready to keep going but, unbelievably, the plug was literally pulled because the curfew had been breached!

The epilogue was film of Bruce meeting some of the fans that had the longest segments in the film, including the British Mr and Mrs, Bruce told the Mr that he was now going to do four hour shows lol!  I think anyone who is a big fan of anyone or anything can understand how these people feel. It was a good way to finish the film, and really, seeing how Bruce was with those fans you realise why they love him so much, his sincerity isn't forced, his passion for music is unique and he loves every moment on stage, and he's a very, funny down to earth guy.

When we came out of the cinema into the still balmy night we were sweating almost as much as Bruce on-stage, boy was it hot in there. Dawn was impressed with the film and Bruce's music, I think he's gained another fan! I wasn't surprised really, I know Dawn is passionate about music and this film gave her the chance to hear a range of his music and she appreciated how diverse

So, as I tentatively approach 60, I look at Bruce who's still looking good and rockin' at 63, and he inspires me, I've still got lots to see and do in my life and I'll continue rockin' too!


I want control right now
Talk about a dream,
try to make it real
You wake up in the night,
with a fear so real,
Spend your life waiting,
for a moment that just don't come,
Well, don't waste your time waiting

Gavin Gives the New Album a Thumbs Up

In an article in the Irish Evening Herald today Gavin Friday was quoted as being very positive about the new U2 album. He said:


"I've heard the new album and it certainly is a development. U2 turns corners very quickly and what hits you is how fresh it sounds. With Edge involved, there is still plenty of guitar," Gavin told the Herald.
"They asked me what I thought and I told them I really liked it. It's definitely their most exciting release since Achtung Baby."
What with this and Adam's answer "Sometime next year" to a fan's question "When will we see you back on stage?" recently,  I am officially now letting myself get excited about the new music and tour!
The full Evening Herald article can be read here
Posted by Sue Fell at 18:06 2 comments:

The Angels Are Baking Cakes 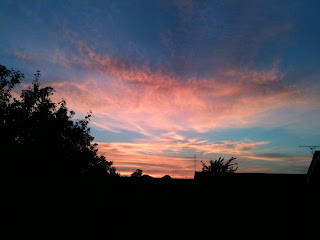 Most people have lost someone close to them, and it
is hard for a long time but eventually you get on with your life, although there's a part of you that has died with them. Then out of the blue something happens that reminds you of them. That happened to me this evening. Coming in from work  there was a gorgeous sunset that turned the sky pink and immediately it made me think of my mother who died eleven years ago.

I got my love of nature from her, if there was a beautiful sunset we would often call each other to make sure we didn't miss it. But my memories of sunsets and my mum go back much further, to when I was a young child and if the sky glowed pink or red she would tell me that it was that colour because the angels in heaven were baking cakes. I remember I found that fascinating as a child and I still think of that - and my mum - every time there is a beautiful sunset, she would have loved nature's show this evening.
Posted by Sue Fell at 00:03 No comments: 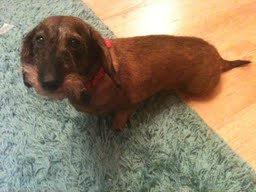 Our hot and sunny spell continues, we so deserve this good weather after all the crap summers we've had recently. This is when I appreciate working part-time all the more as I can fully enjoy these lovely days.  I don't mind not having a holiday somewhere warm this summer when it's like this, this is such a lovely country when the sun shines! Apparently the jet stream is sitting north of the British Isles instead of south hence the prolonged good weather, hopefully it'll stay there for a good while yet.

In the garden my strawberries and raspberries are reddening, will pick the first of them tomorrow. I have my first crop of Cox's Orange Pippins fattening up on my apple tree and my potatoes are nearly ready. This is the first year in about five that I haven't planted tomatoes, I gave up as they had failed miserably due to little sun and copious amounts of rain. Ironically, this year they would have thrived!

Took Pepsi to get groomed today, thought he'd appreciate losing his thick curly coat in this hot weather. He's literally half the dog he was lol! Though Pepsi, being the ragamuffin he is, still manages to get his "beard" all over the place!

Enjoy the summer folks!
Posted by Sue Fell at 23:26 No comments:

A new U2 album is on it's way this we know for sure.  After many months of very secretive recording, suddenly the "leaks" start coming. First an album title and a list of possible track names, now an instrumental piece called Word Press II has turned up. Who knows if it is someone having fun playing with U2 fans or an offical "leak" to get publicity.  Wherever it has come from I must say it does does sound like U2, but as there are no vocals I'm a bit suspicious of it. Have a listen and see what you think.