Well he was there on video anyway, to promote the ONE charity campaign, the Big Brother housemates are cultivating a garden which is part of this campaign.  Below is a report from the Big Brother Africa website and a video. At least he's still around, U2 news has been non-existent for months, let's hope Bono and the other guys are BUSY in Dublin.....

BONO stunned housemates on the African version of Big Brother – when he appeared on video screen to address them. The legendary rocker was beamed to the house live from Dublin, which contains housemates from 14 different African nations.“This is your Irish rock star fan, Bono. You are my big brothers and little sisters”, he said.The U2 front man spoke to the housemates about the garden which they have to cultivate over the course of the series, as part of the new campaign being run by his ONE charity.“I hear you’re growing and farming the future, and that the fruit is the hope and change that we’re all hungry for”, he told them.The star finished up by telling the stunned housemates: “Big love, big respect from Dublin Ireland and everyone in the ONE campaign”.

U2 front man makes guest appearance on Big Brother Africa via @Indowoman
Posted by Sue Fell at 01:43 No comments:

Email ThisBlogThis!Share to TwitterShare to FacebookShare to Pinterest
Labels: Africa, Big Brother, Bono, Dublin, One, U2 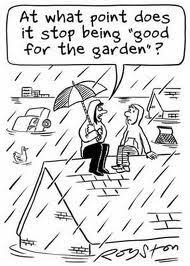 Here in Cumbria we've had a three day respite from the almost constant rain of the last few weeks and it's been lovely! Though I know other parts of the country have no been as lucky.  Here suddenly people are in their bright summer clothes once more and my dog Max doesn't shrink back in horror at the rain when I open the front door!

I know our islands are known for being rainy but this "summer" has been exceptionally wet and this level of rain is not normal even for us, June was the wettest on record.  Apparently this is all due to the fact that the Jet Stream has moved position.  I won't go into it all here, but if you are a bit of a geek like me and like to know about such things, you can read all about it here.

I just hope the Jet Stream moves back to it's normal position soon so we can get a bit of a summer!  Meanwhile I had to smile at the cartoon to the left, it's good job we have a good sense of humour in these islands!
Posted by Sue Fell at 16:43 No comments:

A Birthday, a Telephone and a Circus.....

Bono and Ali's youngest daughter, budding actress Eve Hewson, celebrated her 21st birthday in style in Las Vegas at the weekend. Eve's parents were at the party and a recording of Bono and Ali singing the Gaga/Beyonce song Telephone was played for Eve, would love to hear that lol! I'm sure it would have been tongue in cheek with new lyrics appropriate to the celebration.


Next day Bono went to the Mirage to see the Cirque du Soleil performance Love, which is based on the music of the Beatles.  Now back to song writing and recording please Bono! ;)


You can read more here
Posted by Sue Fell at 19:40 No comments:


Long time no post!  That's mainly because things have been quiet with me and the weather has been shite to say the least. I have never known so much rain day after day, June was the wettest ever and July has been just as wet so far.  Consequently many of the summer (haha) events have been cancelled which is a shame. But today my cousin Janet and I went to the yearly Culture Bazaar 2012 which was held in a school in the centre of the city.

It was the first time we had been and we really enjoyed it. Carlisle is not as culturally diverse as many cities in this country, maybe because it is quite a small city we are quite geographically isolated. But over the last few years there have been more "incomers" (as we call them) from all over the world resulting in a more multi-cultural and interesting city.

When we arrived there was a Latin-type band playing in the atrium with kiddies dancing to the music as the adults watched. We wandered around the stalls and both bought lovely Nepalese bags at the stall raising funds for the Gurkhas, a good cause if ever there was.

We looked at other stalls, I picked up some info on a Buddhist group that meets weekly that I may go along to, I've always been a bit of a closet Buddhist.

We then went to have lunch.  Being a non-curry eater there wasn't a lot of choice for me but I got the Thai sweet and sour chicken which was lovely! Janet went for a green curry which she thoroughly enjoyed.  She also decided to try root beer because she'd never had it before and the event was all about diversity!  I said nothing, but had to laugh at the look of horror on her face when she took the first sip, likening it to smelling like Deep Heat (and probably tasting as bad) she went to buy something else, LOL!  It was exactly my reaction when I first tried it in the US many years previously - the first and last time.

After lunch we had a look upstairs where the complimentary therapies were going on, the only one actually giving free sessions a the time was reflexology, unfortunately I can't stand my feet being touched so I gave that a miss.

We then decided to get henna painted onto our hands, it wasn't free but we thought it was worth the £5 charge. A beautiful Indian girl did the henna work. She had taught herself and had been doing it since she was 13. You definitely need a steady hand for that kind of work. We were both very happy with our designs, but boy does the henna smell!  It takes about 20 minutes to dry so once home I rinsed of the dried henna paste and it has left a lovely brownish red pattern on my hand, the girl said it should last about five days.

After this we sat down and watched a steel band play, they were just kids from the school where the event was held but they were good.  Watching over them was a black guy wearing a Trinidad t-shirt, obviously their tutor!

After that we headed home, we both really enjoyed it, it was something different and events like this are good for communities, helping foster mutual understanding.  We'll definitely be there again next year.
Posted by Sue Fell at 22:12 No comments: