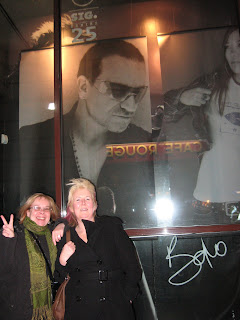 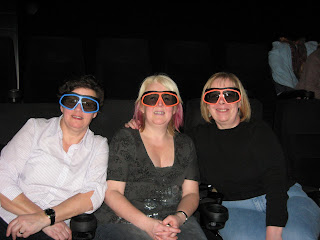 We could find our way easily round the IMAX now seeing we'd visited it quite a lot in the past couple of days! We settled into our seats and were blown away for the third time and again picked up new things, it really is a film you need to see more than once. At the end I felt kind of sad, at bit like I do at the end of the last gig I'll see on a tour. This was it for me, not more U23D, but I'm lucky to have been able to see it in an IMAX - three times, so I'm very happy with that. And it was certainly worth the journey and expense, and I'm glad I could share it all with my dear friends Debbi and Dawn, who I know were as impressed as me.
Posted by Sue Fell at 17:36 2 comments:

You can say what you like about Damien Hirst's often controversial art, but you have to commend him and Bono for putting together this auction. It raised an amazing $42 million for the Product RED charity, (all proceeds go to the charity), surpassing estimates by a long way. A combination of Bono's relentless drive and Damien's art contacts (he sent over 100 handwritten letters to other artists asking if they would contribute, 90% did) helped make this auction a massive success.

A short interview, filmed just before the auction, with Bono and Hirst was shown on Good Morning America. Watch the "Dynamic Duo" here:

I've been avidly reading the reviews of U23D from America, heard first -hand reports from friends, and they have been, without exception, excellent. This has whetted my appetite even more for the film, but why or why does Europe have to wait an extra month to see it??? Very frustrating and I've heard no explanation as to why either. Ahh well, they say good things are worth waiting for - 18 more days and we'll see if that's true!
Posted by Sue Fell at 12:04 No comments: