Bono has been in Verbier this week.  Had to laugh at the fact that he seems to be spending more time in restaurants than on the slopes skiing - a man after my own heart!  I'm not surprised he's not skiing, the thought of our clumsy Bono on skis is scary lol.  Below is an excerpt from an article about this, full story and more photos here.


"The lead singer of U2 has been in the upmarket Swiss resort this week. But he was spotted more in the restaurants than on the slopes.

First it was outside the Vieux Verbier restaurant at the bottom of the main Medran lift in the middle of the week. It was during the day and he was not in his ski wear.
With his trademark dark glasses and scarf pulled over his face many of the diners and skiers had no idea they were in the company of high rock celebrity as he holidayed in the resort.
Then at 3.45 on Friday afternoon when  most people are putting in their final turns of the holiday, he emerged from Le Cristal restaurant at Les Ruinettes.  Fresh lobster is a speciality of the establishment.
It was half way up the mountains but again no sign of any ski wear despite the good conditions. And as he came out with his entourage he headed straight for the lift down to the village rather than the slope."
Posted by Sue Fell at 01:30 No comments:

U2 Confirmed For Glastonbury

What we already knew has been confirmed, U2 are headlining at Glasto on Friday 24th June.  U2.com (it occasionally has its uses
Posted by Sue Fell at 22:06 No comments:

Email ThisBlogThis!Share to TwitterShare to FacebookShare to Pinterest
Labels: Edge, Glastonbury, U2

Last year I let my membership of U2.com lapse.  I was sad to do this as I'd been a member of Propaganda and then U2.com  for 25 years.  But over the last few years I became more and more dissatisfied with U2.com.  The final straw being in summer 2009 when current members were asked to re-subscribe in order to get pre-sale codes (which enable you to get concert tickets a few days before the general public) for concerts in 2010.  My subscription was due for renewal in March 2010 and no way was I going to take out an expensive re-subscription over six months early in order to get a pre-sale code!  If you are a current member when tickets go on sale you should get a code.  And when the proper re-sub date came up I let the membership lapse and so ended a long fan club membership.

Many, many fans are dissatisfied with U2.com, fans really deserve better for their money.  A petition which sums up the problems very succinctly and respectfully has been started here.  I know some of the U2 fans who read this blog are not happy with U2.com either.  Maybe you might like to sign the petition.  It might or might not change things, but if fans don't say anything those at U2.com will think everything is ok and it certainly isn't.
Posted by Sue Fell at 19:12 2 comments:

Email ThisBlogThis!Share to TwitterShare to FacebookShare to Pinterest
Labels: U2.com

I was a bit bored this evening and was looking around on You Tube and found this,  thought it was quite funny, he actually does sound very like Bono!  It's a clip from an Australan show called The Wedge.  Enjoy.

Email ThisBlogThis!Share to TwitterShare to FacebookShare to Pinterest
Labels: Australia, Bono, The Wedge 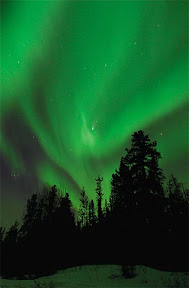 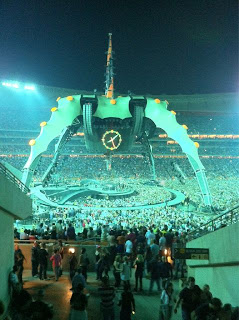 Showtime!  360 is on the road again, this photo was taken tonight in Johannesburg (photographer unknown).  Gives me goosebumps!  Seems the set list was shaken up a bit but there were no surprises.  But it's always like that on the first gig of a tour leg.  Also U2 haven't played South Africa since the Popmart days so some of the songs we have got "used" to in Euope and North America will be new live to these fans.  Hopefully when they do get back to North America they'll be playing some of those songs they have been rehearsing ; ).  Roll on my next 360 fix in the ever wonderful Canada, is all I can say!
Posted by Sue Fell at 23:35 No comments:

I couldn't ignore what has happened in Egypt over the last couple of weeks.  I've followed the People's Uprising via the excellent cover the BBC gave it.  Part of me watched, hoping that the people would succeed, but thinking they probably wouldn't.  Ordinary people can't overthrow an oppressive dictator of 30 years can they?

But on the 11th February Mubarak stood down handing over the reins of government Higher Council of the Armed Forces.  The unbridled joy of the people was moving to watch, it felt like such a victory for the ordinary people who often feel they have no voice or power.  Over the weekend the people spontaneously tidied up Tahrir Square, cleaned monuments, painted, brushed, picked up litter.  Almost as if they were sweeping away the old to make room for the new.

The hardest time for Egypt is still ahead, trying to form a democratic government will not be easy.  But I so hope for those very brave, ordinary people that it succeeds, and that this most ancient of countries becomes all that they want it to be.
Posted by Sue Fell at 22:56 No comments:

Location
On Bridge Street, Longtown, (eight miles north of Carlisle) - the A7 scenic route to Edinburgh.  You can park easily close by.

Ambiance
The Sycamore Tree is small and traditional in decor.   A typical cafe, nothing special, but clean and comfortable.

Food
For a cafe, the food is excellent, with freshly made and generous portions.  More restaurant quality than that of a cafe. The home made scones, cakes and desserts are wonderful.  Sunday lunch (which is what I had today) consisted of a generous portion of beef (one other meat roast is also available each week) mash and roast potatoes,  four different fresh vegetables and a huge, light and fluffy Yorkshire pudding.  I wasn't going to have a dessert but saw the chocolate pyramids and succumbed!  It consisted of three thin triangles of marbled milk and white chocolate that formed the pyramid which contained a light chocolate mousse and fresh raspberries.  Mmmmm, delish!

Service
Friendly and quick service - even though they were very busy.

Price
Low.  Our Sunday roast was £6.10 which was fantastic value for what we received.  You can also get kids size and larger portions for a small amount less and more.

Brightly coloured clothes in the shops, still light at 5.30, Easter eggs, thoughts of holidays and decorating. A sigh of relief, Spring is coming.


- Posted using BlogPress from my iPhone