Slade, Carols and Races With Bono

Bono was out and about at his usual places in Dublin this Christmas time.  First he appeared at the Grafton Street Christmas Eve busk in aid of the homelessness charity The Simon Community with Glen Hansard and others. They sang Slade's Festive Season stalwart, Merry Christmas Everybody and the carol Oh Come All Ye Faithful.  It's a wonderful tradition, but it must be a logistic nightmare to get Bono in and out through the crowds. Let's hope they can continue it in the future, there always seems to be a great atmosphere.

And today, St Stephen's Day in Ireland, Bono and Ali were at the races at Leopardstown as per usual, below is a rather nice interview with the man himself.

From Hartnell to Amies - Exhibition at Tullie House, Carlisle

I recently went into in an exhibition at Tullie House called From Hartnell to Amies, Couture by Royal Appointment, celebrating British fashion from the 1920's to 1960's.
Until the 1920's British fashion was influenced mainly by Parisian styles. In 1923 Norman Hartnell opened his first salon in London and then never looked back. Thirty years later, after many years of royal patronage the highlight of his creations was the dress for the Queen's coronation in 1953.

It was a wonderful exhibition, I think I would have loved to have lived in the 1930's as I especially loved  the glamorous fashions of that time on display. It was interesting to see the marked change to more plain, utilitarian clothing of wartime "make do" 1940's that followed.  It was so interesting to see how each decade's fashions were so very different from the previous ones, culminating in the short, bright, dresses of the swinging 60's.


The exhibition was complemented by stunning fashion photos by Norman Parkinson. Unfortunately photography was not allowed so I have copied some of the photos here from the accompanying exhibition pamphlet.

The exhibition is well worth seeing and continues until January 26th 2014.  You can read more about it on the Tullie House website here. 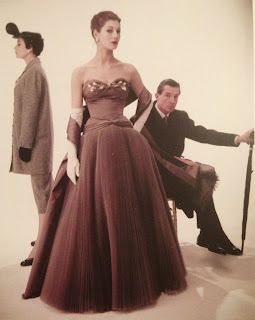 The mild spell we have been having has definitely gone and it's nippy now. The shortest day of the year is almost here, the madness of Christmas a week away and my thoughts turn to sunshine, warmth and my favourite sunny place, Nice on the Cote d'Azur.  Hopefully I'll get back there next year, in the meantime I can dream on.....