I found this photo on one of my favourite websites, The Long and the Short of it All, aren't they just irresistible?   You can read the story behind the photo here, some bribery for posing for the photo was involved LOL! 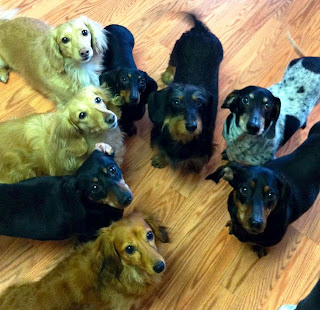 Bono in Africa in Photos

Interesting and balanced analysis of some of the photos taken by Adrian Steirn during Bono's recent trip to Africa can be found here. 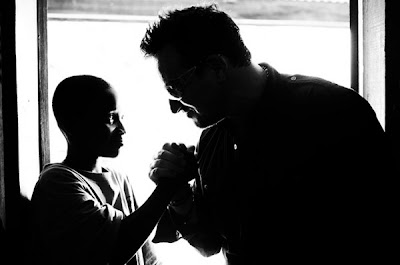 Came across these amazing underwater photos by Seth Casteel of dogs retrieving a ball.  It shows that the wildness of dogs is still just under the surface, but thank God most choose not to use those fearsome teeth on us!  Here's a short interview with the photographer about this photo shoot that appeared in The Washington Post Style Blog.

By May-Ying Lam
The eyes are wild with intent and read nothing but animalistic ferocity. They’re crashing with a chaotic splash on the pristine surface of the water in maniacal pursuit of their prey. They’re chasing squeaky toys.


I caught up with Casteel between e-mails to find out more about his photographs. The pet photographer was in California, where he often shoots.
Why do you think people like these photos?
The dogs are getting back to the wild side. I think dogs have been domesticated over the past thousands of years. Not that long ago, pugs were wolves. I think dogs today enjoy being spoiled. I also think they have wild roots and appreciate the opportunity to explore those.
How did the idea for these photos strike you?
I was working with a dog named Buster. He was more interested in a water photoshoot. My goal is always to embrace what they like to do. He was so excited about the water, passionate about the water. His story had to do with the water. The Sony point-and-shoot was my first underwater setup.
What is your favorite photo and why?
The difficulty of the [photo below] was very high level. What’s interesting about this picture is these two are super good friends, pals. They both dive, love water and love each other. I can work with them together with no aggression toward each other. Some dogs don’t want to share the tennis ball. It is a very terrifying picture but behind the scenes they’re friends. The credit all goes to the dogs. I call it “Sharing is Caring.”

“Sharing is Caring.” A Border Collie and a yellow Labrador Retriever simultaneously pursue a ball underwater. (Photo by Seth Casteel/TandemStock.com)
Do you have any interest in covering the Westminster dog show?
I like dogs in their natural environment. I think a dog in the show ring is the most boring thing in the world. If someone said come coverWestminster, I’d say, “No, but thank you for the opportunity.” Creatively for me, I have no interest.
What’s your camera setup?
My setup now is the Canon 7d with underwater housing. (Casteel declined to reveal his lighting techniques. “I worked really hard to get the recipe for these shots.”) People want to know if I scuba or snorkel. I don’t. I free drive and can hold my breath for 90 seconds. I weight myself down to the bottom of the pool. It’s physically demanding, the work.
Have you ever gotten injured during a shoot?
The camera is only inches away from the dogs. There is no aggression towards me or other dogs but they are very, very excited about retrieving this toy. I have a pretty good strategy. I know exactly my space and know my working distance.

It was a bitterly cold early morning as I stood in the station in Carlisle waiting for the train to Manchester.  The icy wind was whistling down the platform as well wrapped up passengers silently shuffled and craned their necks looking for an approaching train.  A few birds were swooping in and out of the old Victorian building and I wondered how on earth they manage to survive in this kind of weather.

After an unintelligible intercom announcement our train arrived and we were relieved to get into the warmth of the carriage.  We sat for quite a while before an announcement by the guard told us that due to a late arrival of another train we wouldn't have a driver for another half hour (there had been a major train incident near London causing chaos to the rail network).  We could, if we wanted, get off and get on the next Virgin train to London and change at Preston for Manchester but I decided to stay on the train as it was a through train anyway.

Eventually, an hour late, we set off.  Being such a cold day meant it was sunshine and blue skies and the countryside looked beautiful as we glided through it.  At Lancaster the guard announced that the train would now terminate at Preston and we would have to then get a train from there to Manchester.  A lot of people, including me, were annoyed at this as the very reason we stayed on the train was because it was a through train.  So it was back to standing on a freezing platform once more for what seemed like a very long fifteen minutes until the train came.

At Chorley there was an interesting sight to behold, a very large group of Mormons (they had badges proclaiming their name and faith).  Many got on our coach, and the males were all dressed the same, pristine black suits, black overcoats, white shirts and black ties, hair short, all in the same style.  One of the few females in the group sat behind me and started talking to the man beside her who was a Scot and an atheist.  A very interesting, always polite, conversation ensued, with the Mormon referring to the Bible and the Scot proof from archaeology, geology etc.  to support their views. The Scot got off at Oxford Road and one of the female's colleagues then sat next to her and and I heard her say. "It's amazing how people believe those lies."  Mmmm say no more.....

Once at Piccadilly I met up with my friend Julie, we went for a snack and then headed towards our hotel via the shops LOL!  The hotel was a new Travelodge literally within a few minutes walk from the MEN Arena.  It's a new hotel and indeed you could still smell the paint.  Our room was fine, a bargain for £15!

Later we walked into the city and went to our favourite Thai restaurant Chaophyraya for our meal.  As usual it was lovely, great atmosphere, good food, perfect service.  We washed the meal down with a lovely bottle of Montepulciano, just what we needed to ward off the cold outside.

Then it was time to head for the MEN and the gig.  The support was a band called Everything Everything, we hadn't heard of them and didn't go in to see them.  When we did get to our seats we were very pleased with them, they were excellent, the lower block to the right of the stage. We'd got them with a pre-sale code we were given when we pre-ordered the latest album, Fallen Empires, via the band's official free website.  That's how it should be done U2, I'll say no more otherwise I'll get all steamed up once again!

Snow Patrol took the stage at 9pm opening with the instrumental Berlin accompanied by a very clever and beautiful video animation. I must find out who does that for the band, it was fabulous the last time we saw them live in Manchester three years ago and it was excellent this time too.  The stage was simple, video on the backdrop and a huge movable snowflake that was suspended above the band sometimes moving to add to the video effect.  The audience too was frequently used in the effects with various lighting on it, I thought that was good, we were very much part of the show.

The songs started with a rousing I'll Never Let Go, after which Gary apologised for having his flies open, spawning lots of "shut your flies" jokes.  I never noticed, and from what I hear others didn't either, so no worries Gary LOL.

The crowd really got warmed up with Take Back the City.  Gary asked people who were sitting to stand up and most did which was great.  He has that effortless Irish charm, warmth and easy banter that is so endearing as he chatters away to the audience - something he does frequently.  This create a wonderful closeness that really adds to the whole experience.  Besides that, his voice live is fantastic and the whole band is a very tight unit.  I noticed they used a lot of different percussion instruments which made for some interesting sounds.

Highlights, for me personally, firstly was This Isn't Everything You Are from the latest album Fallen Empires.  A beautiful song, deep, moving lyrics, the crowd joined in I felt a lump in my throat as the voices echoed around the arena. It's just one of those special songs that touches your soul:

"Then in one little moment

Breathe deeply in the silence

And hold on tight

There's joy not far from here

I know there is

This isn't everything you are."

Next highlight was Run.  The opening notes rang out Gary came to the mic to sing and the audience took over, he stood back, a big smile on his face and let us sing.  He eventually joined in with us and once more I knew that this song was my favourite song ever, even moreso than any U2 song (well, maybe equal with Bad).  This is a real classic song that will never lose its magic.

Chasing Cars was initially performed quite low key, again it was a communal singalong, with the full band coming in for the last part which was very powerful.  Good to see favourite older songs Chocolate and You're All I Have in there too.  Fallen Empires is one of the new songs I really like.  It is has great percussion and reminds me a bit of Arcade Fire which isn't a bad thing. The set finished with Just Say Yes, which was good, but I preferred the ending they did last time with The Lightning Strike.

All in all I thought the gig was a good balance of old and new songs.  I thought the concert flew by then Debbi told me that it had only lasted one hour forty minutes,(I never wear a watch), so that was the only disappointment, it was a short gig. The show was about the band, the music and the audience, with minimal special effects and it was fabulous, good music speaks for itself, it doesn't need anything else.

Below is a video from the Manchester gig, followed by the setlist.