A Day of Mishaps!

I was woken with a jolt today - literally!  I heard a crack, then another and another, then I sunk in my bed, another crack, and I was sinking lower.  I am not good in the mornings, but eventually due to my sunken state under the duvet, realised my bed has collapsed!  I know I'm not slim but this was ridiculous!  I hauled myself out of the bed and peeked underneath and many of the pine slats had given way along with the central metal bar of the bedstead.  I realised then that my laziness a few months ago had come to haunt me.  When I'd decorated my bedroom a while back I'd dismantled the bed and afterwards put it back together.  However after it was all done I realised I'd forgotten to put the three metal legs onto the central metal bar.  I couldn't be bothered to sort it out thinking it would be ok.  Well, my laziness was costly because today the lack of those legs caused that central metal bar to give way.  So now I have to get another bed, and will have to sleep on my mattress on the floor until it arrives.  Just shows that taking the easy way out ultimately doesn't pay!  But I  did find a half price bargain bed on the Tesco website, and I also got 1000 Clubcard points - I'm manically saving these points and changing them to airmiles for a planned trip to the US next year and this has boosted my miles so this episode has had one bonus for me.

Then tonight at work I managed to trip over my own feet and fell heavily on my knee, luckily there was no one around to see me sprawling ungainly on the floor!  My knee is now sore, swollen and very bruised, think I'd better get to my bed (on the floor) before anything else happens!
Posted by Sue Fell at 23:56 3 comments: 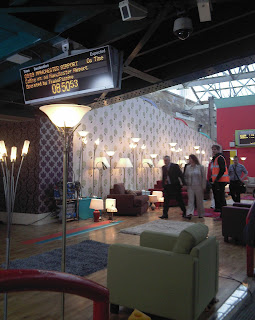 My friend Debbi and I have been on a short trip to Dublin recently.  I got the train to Manchester Airport and as I walked into the station I saw wallpaper on walls, armchairs, settees, lots of lights, laminate flooring.... then I remembered that I'd heard they were making an ad for Homebase at the railway station.  It really cheered the Victorian station up, they should have it like that all the time, easy chairs would be nice to relax in as you wait for your train
Posted by Sue Fell at 22:09 No comments:

Ever since I was a toddler I've loved shoes.  My mother told me that from a very young age if I got new shoes I would keep them on and even go to bed in them.  Recently my shoe obsession has got a bit out of hand.  I bought a pair of warm comfy boots during our month long freezing snap, a great buy my tootsies were lovely and warm in them.

Then I got a bargain in the sale of a great pair of shoes that were £55 for £16, well, at such a bargain price I just HAD to buy them didn't I?

I trawled the Net and found a wonderful pair of walking boots at half price.  Well, seeing I enjoy walking with my Dachshund boys so much they were perfect, so I got them.

But I must stop now, really I must!  I will NOT buy any more footwear!
Posted by Sue Fell at 23:49 No comments:

Email ThisBlogThis!Share to TwitterShare to FacebookShare to Pinterest
Labels: Shoes

U2 to Play Aviva Stadium in Dublin?

A guy on the Irish TV3 channel announced today that U2 were going to play the Aviva Stadium (it used to be Lansdowne Road) in the summer to end their 360 tour.  I'm not sure what to think as the tour isn't ending in the summer, the last announced gig at the moment is Rome well into October.  I suppose it could mean NEXT summer if the tour continues into 2011 but that's unlikely I would have thought.   There's nothing on U2.com to confirm either.

Rumours always surround U2, but this announcement definitely happened, you can watch the video of it here .  Time will tell.......
Posted by Sue Fell at 15:25 No comments:

I haven't written much in my blog recently mainly because life has been quiet and I've just been plodding on with my normal life.  This time of year often is quite dull I find, and I'm getting sick of the winter.  Mind you the good thing is that the days are getting longer which is always good to see.

But things are livening up soon, it's not long until my first trip of 2010, a few days in Dublin.  It'll be great to be back in what feels like my second home once more, it'll be seven months since I was there, a long time for me.  As per usual we've already got our evening meals mapped out and I'm salivating at the thought LOL!

Meanwhile the story below has nothing to do with Dublin but it tickled my fancy today:
The Multilingual Car Park Machine....
Posted by Sue Fell at 23:04 1 comment: