Halloween Past and Present

The last day of October -  Halloween (and a certain drummer's birthday, all the best Larry!)   It's been extra creepy this year as it is the first night of GMT, the clocks have gone back and it's been darker earlier.  I've always been interested in how ancient beliefs live on in our modern world and Halloween is a really good example of this.  Halloween is derived from the Celtic festival of Samhain, "summer's end", and the ancient British equivalent Calan Gaeaf.  The festival of Samhain celebrates the end of the "lighter half" of the year and beginning of the "darker half".  The name Halloween is derived from All Hallow's Eve - the night before All Saints Day on the 1st of November.

The ancient Celts believed that the barrier between this world and the spirit world became very thin on Samhain, allowing spirits (both harmless and harmful) to pass through. The family's ancestors were honoured and invited home while harmful spirits were warded off. It is believed that the need to ward off harmful spirits led to the wearing of costumes and masks. Samhain was also a time to take stock of food supplies and slaughter livestock for winter stores. Bonfires played a large part in the festivities and maybe that is why bonfires became a big part of Guy Fawkes night just a few days after on the 5th of November.

Soul cakes were small round cakes made for All Saints Day to celebrate the dead. The cakes, often simply referred to as souls, were given out to soulers (mainly consisting of children and the poor) who would go from door to door on Hallowmas singing and saying prayers for the dead. Each cake eaten would represent a soul being freed from Purgatory. The practice of giving and eating soul cakes is often seen as the origin of modern trick or treating.

Lanterns were made from hollowed out turnips containing a candle and they were placed in windows to ward off evil spirits.   We  had turnip lanterns when I was young, bloody hard work to carve!  God bless my mother for her hard work diligently carving those lanterns.  I'll always remember that smell when the candle burned the inside of the turnip "lid", it was the smell of Halloween for me.  Nowadays the turnips have been replaced with the American import, the pumpkin.

I've had a few young children round trick or treating, they were all very sweet, filled with wonder and had great costumes!  It got me to thinking what Halloween was like when I was young.  We used to get dressed up, though it was mostly homemade stuff, we couldn't buy much stuff in the shops like today, it was mainly scary masks that were sold, Halloween was not commercialised much in those days.  My friends and I used to go round houses, dressed up, carrying our turnip lanterns asking "Anything for Halloween" - trick or treating didn't exist then - and we were given sweets, nuts or fruit.   We used to hide and try to scare each other as we did our "rounds".  We'd go Halloweening (as we called it) by ourselves, childhood was generally more innocent and safer in those days. 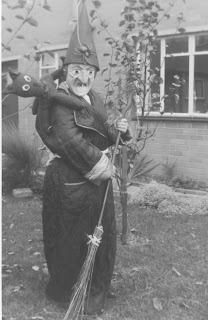 Afterwards my mother always held a Halloween party for me and my friends.  She always made it brilliantly creepy, with delicious food including the traditional toffee apples.  We had games like dunking for apples, which was trying to get apples out of water just using your mouth, it was always fun.  Halloween is just after the apple harvest here in the UK so that must be why they feature so much in the festivities.

Now Halloween in the UK is vastly influenced by the US, and it strikes me as ironic that a festival that started in long, long ago in Britain and Ireland, which was taken over to the US by emigrants, has now come full circle back "home" with touches added by New World.  I suppose this is what happens over time.  It's also not just for kids now, adults have fun too which I think is great.

All the memories triggered me to look at my family photograph albums - luckily my mother was a prolific photographer and my childhood is recorded very well in pictures.  I found some photos of me at Halloween and here's one of them - complete with black cat and spider LOL!
Posted by Sue Fell at 22:08