Got up at noon, met up with Dianne and went to pick up our Red Zone tickets. We then decided to wait for the band arriving. Not many fans were waiting and it was pleasant in the warm sunshine. At 3.30 a silver people carrier came in, someone noticed Bono's security man in the front so we knew Bono was probably in the back but of course we could not see because of the blacked out windows. The car stopped a few yards down the entry road and out got Bono and headed towards us. That's always the moment your heart stops and you can't believe what you are seeing that's Bono walking towards us! 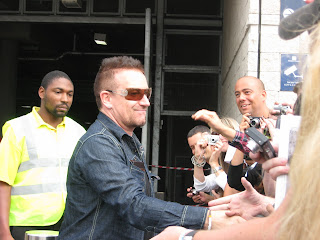 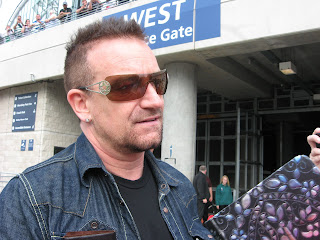 The fans were well behaved and formed a line which Bono went along chatting and shaking hands with people. He looked well, dressed in denim shirt and trousers and a black tee shirt. He stopped when he got to Debbi and I, he recognised us which was lovely to see. He said hello and shook our hands, his hand was warm and very soft, his eyes very blue through the gently shaded glasses (they look really dark in the photos).

Debbi said that his voice was really good at the moment to which he replied, (something like this
anyway)"Thanks, I thought I was singing good." He then asked us how the sound was "Because the sound was bouncing back at me". We told him that it was good where we sat. He asked whereabout we were, Debbi said that we were in seats to the side of the stage to which I added, "On Edge's side in the lower tier." Bono nodded and said he was glad the sound was ok for us because he "Was worried about that." He then shook Julie's hand and waved at people above who were shouting down at him, before going back inside.

I looked round at my friends and, like me, they all had big grins on their faces. It's amazing what an effect Bono has on people! We were thrilled to meet him again as it had been quite a while since our last meeting and there haven't been a lot of fan meetings so far on this tour, so we were very lucky too.

We went back to our hotel and had a meal, we were all giddy and over-chatty, I wonder why? LOL!
Posted by Sue Fell at 19:03