When we got up at noon after going to bed at 5am we were actually relieved that we were not going to the 360 show that evening! I never thought I'd say that but it's true, I was knackered, felt like I'd been on a marathon or something. But the previous day I'd got up at 4am, travelled to Ireland, found our accommodation, got to Croke Park, stood for over two hours, was emotionally drained, then got home and drank alcohol, ate and chatted until 5am, no wonder I was weary! I decided in future I would arrive in Dublin the day before the gig, I have to pace myself nowadays LOL!
So we had a lovely leisurely weekend and by Monday I was raring to go again. Once more we got the bus from Bewley's Hotel to Croke Park. Our seats were cheaper this time and in the top tier, I thought I'd never get there, trudging up flight after flight of steps - I'd forgotten about all those! Our seats were a bit vertigo inducing initially, but once people sat in front of us it felt better. We still were quite near the claw, kind of looking down on it this time (yeah that's how high we were!). 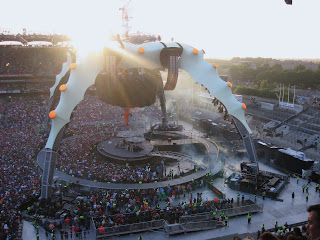 Sunset Over The Claw

We caught the support band The Script's set. I really like quite a few of their songs and wasn't disappointed in them live. The singer has a great voice and many of the songs were familiar. They were incredibly popular with the audience and seemed overcome by the reception they got. It's good to see U2 giving a new, young Irish band a chance to support them, with all the publicity that gives them.

U2 took the stage at about 8.45pm and launched into the usual quartet of songs from the new album that they starts the show with. I'm loving No Line On The Horizon more and more. My only complaint during this song is that there is too much of "horizons" on the video screen, we need to see the band more as they play this song.

That night they did New Year's Day which was good to hear once more. They also did Stay a favourite of mine but unfortunately Bono was struggling with his voice a bit during it. Unknown Caller was in the set again, and again it just leaves me cold - except for Edge's wonderful guitar solo at the end which is amazing!

I have finally decided I really like the remix version of Crazy, though I would also love to hear the album version played live too.

The video screen was different for Vertigo, it compressed and came down very close to the stage and by the end of the song was spinning, or the image was spinning should I say, at breakneck speed giving a great effect. Anyone close to it would feel dizzy I think if it was that effective even from our viewpoint.

At one point Bono asked how many foreigners were in the stadium at least half the crowd, including us four, put up their hands! "There can't be that many!" Bono exclaimed then he started reading banners he could see, "Brazil, Germany, ......" It just shows that a U2 concert in Dublin is truly an international get-together and shows how U2's music crosses borders of countries and differences of language.

We got Bad again a real surprise! The encore was excellent again the screen came very low for Ultraviolet and Bono tested the mic lead by almost swinging on it. With Or Without You was once more done very theatrically with Bono being drawn by the movements of the hanging mic. The closer as usual was Moment of Surrender.

The cameras stayed on the band members as they left the stage and walked down the steps to the backstage area, a nice touch.

Once more Bono didn't get anyone on stage which was disappointing. It always seems like he has the whole audience up there when he does that, which instigates a closeness, a connection that feels very real, and I miss it.

I am not sure about the stage set up either. The outer walkway has not been used that much in the three concerts I've seen. Sometimes it's like band member go on the bridges, maybe go onto the walkway do a few steps then go back on stage. They don't seem to be using it well. Maybe it's because it is so big? But I felt that it almost is like a barrier around the band rather than something that makes band and audience feel closer as intended. If they used it more or there was a B stage attached to it that might feeling we have might change. Also, perhaps it feels different if you are nearer to it - we'll be able to test that theory when we are in the Red Zone.

This show was not as emotional as Friday's, I didn't feel dazed and drained when I left. Also it was a little spoiled for us by what Dianne called "Upper stadium annoyances." The crowd around us sat a lot (yeah I know it's hard to believe!) and complained when we stood up, so we spent quite a lot of the show sitting. Luckily at some points during the show people in front of us stood up so we did too and no one could complain as it was the only way we could see then. We had aisle seats and so people were going back and fore, back and fore for the entire gig which drives me nuts!!

So, all in all, a good show, but in my view it wasn't anywhere near as touching and special as Friday's.