After a very early start Debbi and I landed at Dublin airport at 9am and met up with our friend Julie. We picked up our hire car and drove to Bewleys Hotel in Ballsbridge where Dianne had been staying - coming from the US she had flown in the night before.

We had lunch at Bewleys and then drove to the house we had rented for the eight days we were in the city. It was a lovely house close to Lansdowne Road Rugby Ground (which is being renovated at the moment, looks like it'll be an amazing venue when it opens next year).

Whilst at Bewleys we noticed that you could get a bus from there to Croke Park which was really handy for us as our house wasn't too far from Bewleys either. We piled on the bus with all the other fans and headed off.

Croke is in a very residential area and so the crowds thronged the narrow streets as they made their way to the stadium. It felt almost like a market with sale people shouting out what wares they were selling - you could buy almost anything. We passed a pub close to the stadium and it was heaving, standing about 20 deep outside so God knows what it was like inside! What a nightmare. 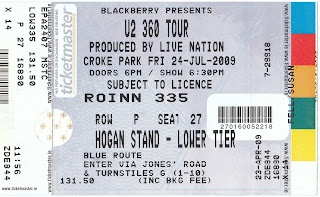 We got to our seats, Hogan stand right opposite the claw, great seat. We'd arrived after the support bands had been on, the vibe in the stadium was electric..... "Ground control to Major Tom....." here we go!

Larry did the Breathe intro and suddenly U2 were on stage. The song rocked, but I'd love to see them try opening with Magnificent I think the long intro of that song would work brilliantly to open a show. The second song was was No Line which was fantastic, I just love the part after Bono's soft singing where the whole band crashes in at "Traffic cop...." This is still my favourite song from the new album.

As the band started at around 8.45pm it was very light for about half of the concert so the full effect of the claw and lighting was lost, that was a shame. But it didn't affect the show much, the emotion was palpable, both within the crowd and Bono, the band were enjoying being back home and the audience showed their pride and love of U2.
Again they played the remix version of Crazy which I am growing to really like. Larry's wonderful drumming gives it a primal, African feel. Though I like this version, I find it strange that the band are playing this live yet are releasing the album version of the song as the next single.
The Unforgettable Fire was stunning, both musically and visually as the video screen slowly lengthened and showed images that complemented the song perfectly.
Bono talked about being Irish and, referring to the recession, said that they would rise once more. He said that the Irish were a sexy people "..... In our own way" LOL! The band sang The Auld Triangle (dedicated to Ronnie Drew

). Bono struggled with the words as only he can , but it still went down very well with the crowd who all sung along. I love it when the band do an Irish song like that, it always creates such a special feeling.
Then, towards the end of the main set they did a snippet of 40 followed by those instantly recognisable simple opening notes of Bad. Debbi and I screamed out loud, it's our favourite U2 song and so long since we'd heard it live and here it was! And boy was it fantastic, it seemed everyone in the audience was singing along, which is amazing when you think that this song is 25 years old and was never a big hit or even released as a single. But it is the quintessential U2 song and is ageless. My friends and I just stood transfixed, tissues in hands to dab away the tears.
The encore was the usual one, Ultraviolet with Bono in his "suit of lights" which didn't really work that well, I don't see the point of it to be honest. With Or Without You was done a little differently from Nice. Bono sang it to the steering wheel-like microphone which moved in a slow dance with Bono following as if he was hypnotised and controlled by it. He swung it away and it always came back, always held him, as if it had a power over him - can he live with the music/fame, can he live without it? Very, very effective.
The final song was Moment Of Surrender, which was done well and sounded good, but I'm not 100% convinced it's the right song to close the show.
Then that was it all over. We left the stadium and initially said very little because it was one of those very emotional shows that leaves you happily drained and it takes time to be able to get yourself together. The power of U2!
We waited to see if we could catch the band leaving for a while and we bumped into our friend Declan. He had been on holiday in Portugal but had come home for a few days to see all three shows then he was off back to Portugal! He has fixed holidays at work and so couldn't change them. Now that's dedication for you.
We eventually left without seeing any of the band and got a taxi home. As has become a kind of tradition for us now, once we were home we were tucking into pizza and quaffing champagne until the early hours!
Posted by Sue Fell at 16:01