I never look forward to going to London, it's so big, noisy, fast, but I was excited this time because I was off to see more U2 gigs! The Red Zone auction that we'd entered was finishing at noon that day and none of us was available to keep an eye on it so it was in the lap of the gods if we got it or not. I kept checking my emails on my mobile and at 1pm I got my confirmation I'd won my two tickets! Deb was bidding for three at the same price so I assumed she'd got them but then I got a frantic message that she was having a problem with her order! To keep it brief, for a while it looked like we might only have two tickets for five people. By time I got to London I nearly had no credit left on my phone as the texts had been flying to and fro.

I met up with Debbi at Euston station and was relieved to hear that it had been sorted, she'd been liaising with a very helpful Ticketmaster customer services person, phew big sighs of relief!
We got the Tube to Wembley Park. The trip took an hour because we had to travel to Waterloo south of the river to get to Wembley way north of the river! It takes so long to get everywhere in London. It was around 5pm by time we arrived at Wembley Park and a lot of people were around. We asked a policeman the way to our hotel, he directed us a way that avoided the crowds but it was a lot longer walk. It was hot and we were getting weary, but eventually we found the Wembley Plaza hotel which was right beside the stadium, perfect!

Julie was already there, and other friends Dianne and Sharon were in another place nearby. We left quite late for the stadium as we had seats, these turned out to be very similar to the Dublin 1 seats, so were really good. The new stadium is massive and very nice.

U2 came on at 8.15, very early, curfews are getting earlier and earlier nowadays! As usual the first four songs from the new album were brilliant, I just love No Line so much! During Still Haven't Found there was one of those magical moments that sometimes happen at a U2 concert. Bono sang the first line and a half with the crowd singing along, he stopped singing and the audience just kept singing at the top of its voice, it was beautiful and moving and you could see the band found it amazing too. It reinforced once more that special spirituality that comes from some of U2's music, a feeling that binds, warms and crosses barriers. Simply beautiful, and strangely not long before that moment Bono said he thought "Something special is going to happen tonight" - he must be psychic.

Crazy rocked, Edge pogo-ing as he played, just love that version now. They had changed it a little I thought, the chorus of the original was more obvious, which was an improvement. Bono was very strong vocally all night. 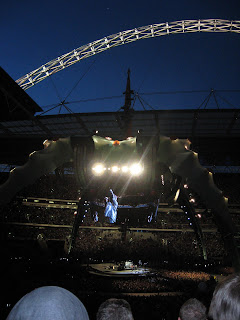 The claw and Wembley arch

Debbi amazingly sussed what is being said by the robotic voice at the beginning of Ultraviolet, it's the poem Stop All The Clocks, Cut Off The Telephone by W H Auden. Very in keeping with the theme of clocks/time that runs throughout the show. During Ultraviolet Bono was hanging onto the mic with one arm and walking along the very edge of the stage, then spinning on it like an acrobat.

Bono dedicated Moment of Surrender to Brian Eno, saying "Get well soon" and that he was a "National treasure."

I've read reviews that said the sound was really poor at this show. Well, where we were there was a slight echo, but no more than that, the sound was fine, seems it depended whereabouts you were sitting how you heard the gig.

We hung around for a while after the show, meeting up with other friends, but there was no sign of the band. It was great to walk just minutes along the road to our hotel! We ordered room service food - pizza - and washed it down with wine. Got to bed at 4am-ish.

Email ThisBlogThis!Share to TwitterShare to FacebookShare to Pinterest
Labels: Bono, Edge, U2, U2 360 Tour, Wembley stadium