Sunday 16th August was our day off - no travelling and no U2 gig. We had intended to go to Hampton Court, but as we had pizza and wine at 2am (No more pizza pleeeeease!), went to bed at 4am and got up late morning we realised that we didn't have time to go to Hampton Court which really takes a full day to see. I'd noticed before heading to London that there was a J W Waterhouse exhibition at The Royal Academy of Arts. Waterhouse has been a favourite of mine since I was a teenager when I had posters of Hylas And The Water Nymphs and Echo And Narcissus on my bedroom wall inbetween all the pop star posters.

Debbi and Dianne just wanted to chill that day, but Julie decided to come along with me. As it was Sunday the Tube wasn't too busy which was a relief, I'm really not a big city person. We got off at Piccadilly and walked the short distance to The Royal Academy. It was an amazing building, approached through ornate gates and a beautifully decorated archway. There was a internal courtyard, one side colonnaded, it reminded me a little of our favourite square in Nice. There were fountains and a cafe with seat outside. People were enjoying the beautiful sunny day there. 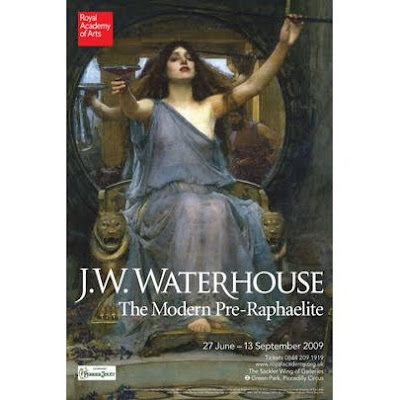 We entered the building which was fantastic in it's own right, highly decorated with marble steps. We got our tickets and made the mistake of taking the stairs to the Sackler Wing where the exhibition was being held - they seemed to last forever! The paintings were fabulous, there is something so awe-inspiring about seeing the actual brush strokes in a painting you love, it somehow brings you closer to the art and the person who produced it. I saw my two favourite Waterhouse paintings from my teenage years up close and it was such a thrill, they were as beautiful in real life as in the reproductions I'd had. I especially loved his chalk sketches of female heads for various paintings.

There was a first edition of Tennyson poems owned by Waterhouse in which he had done beautiful little sketches in. I knew he was influenced by the Greek myths, but learned from the exhibition that he was also influenced by contemporaries such as Tennyson and past poets like Shelly.

There were around 40 paintings, not too big an exhibition, and I just loved it! The pictures are very beautiful and well painted, Waterhouse's depiction of fabric of all kinds is stunning. It was such a treat to be able to see this exhibition, it's on until the 13th September, try and see it if you are in London, it's well worth the trip.
Posted by Sue Fell at 21:53