We arrived at our destination, Cocoa Beach, in the dark due to the three hour delay at the car hire office in Miami. Because of this it took us a while to find our accommodation, but eventually - and with a huge sigh of relief - we found it. The Luna Sea Motel (great name eh?) was a nice place and much better than the hotel we stayed at in Miami.

Next day it was a short drive to Cape Canaveral to visit the Kennedy Space Center. For me it was a dream come true to go to this place. As far back as I can remember I have been fascinated by space, astronomy, the stars, planets, and space travel. I'd always followed the Apollo missions and can remember clearly staying up into the early hours to watch Neil Armstrong take the first human step onto the moon on TV. As a youngster I used to watch the wonderfully eccentric Patrick Moore on The Sky at Night (which is still running today, the BBC's longest running TV programme) to learn more about the cosmos. I even wanted to be an astronomer, but had to give up on that when I realised that maths was not an strong point of mine! But to this day I still am fascinated by the night sky and humankind's journey's into the unknown.

The Kennedy Space Centre was quite busy, but as it was extremely well organised it didn't feel crowded, there were plenty of places to eat, sit and loads of toilets, Americans are so good at organising places like this.

The first thing we did was take the tour around the site. We drove past the huge building where they "stack" the rockets and Shuttle Orbiter. Nearby was a "crawler" the machine which take the orbiter from the building to the launch site. It travels at one mile per hour and each tread on the "caterpillar" treads weigh one ton. We stopped at a point which is as near as we could get to the launch pad and we could see the Shuttle Endeavour on the pad ready for it's blast off on 14th November.

Our next stop was the Saturn 5/Apollo building. We first saw a film about the development of rocket propulsion, the Saturn 5 rocket and the Apollo space programme. They showed a blast off at very close quarters and it was awe-inspiring, the power of it sent shivers down my spine. It was very int 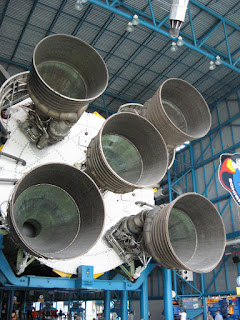 eresting and quite moving at times and made me realise all the more just what heroes astronauts are.

We went through a door and what I saw took my breath away. In front of me were the five massive engines at the base of a full size Saturn 5 rocket! I walked under it in sheer amazement. It dwarfed the people in the building. The command module and lunar module were also there. All the badges from each Apollo mission were on display too. I remember I collected those badges when I was a youngster.

The next stop was was the area that is involved with the Space Station. You could walk through one of the modules and also watch people at work on projects for the Space Station from a viewing gallery.

There were rather odd looking fences around the buildings that curved over. The guide told us these were to stop the alligators from climbing over them. As well as being a space facility the Cape Canaveral area is also a massive nature reserve. The very nature of the place, being secure and keeping the public away from most areas means it is a paradise for wildlife. Some, like the alligators, try to get too close for comfort hence the curved fences.

Back at the Visitor Centre we went to the Shuttle Launch Simulator. First you watched a film of a launch to let you know what to expect - to some degree. Then we went into the simulator and were strapped into the seats. The first thing that happened was that the simulator tilted you 45 degrees, then there was a massive roar and then the shuttle started to shake violently - we'd blasted off! The shaking was strong, but of course the G forces that the astronauts endure as they shoot into space at 17,000 miles per hour couldn't be simulated. 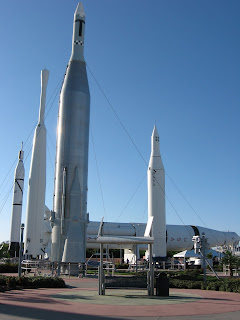 Then very suddenly after eight and a half minutes the shaking stops and there is silence. We are in space. The roof of the "shuttle" opens and there above us is the beautiful blue earth, a breathtaking sight. The simulator gave us a little insight into what it is like to go into space in a Shuttle. The thing that struck me most was that after just eight and a half minutes you can be in orbit in space!

Our next stop was the IMAX theatre to watch a film about the development of the space programme to get men on the moon. It included many of the astronauts who were part of that programme. Again I found it fascinating and admired those space pioneers from the 1960's who eventually achieved that goal.

By now it was almost 4pm, we'd been at the Kennedy Space Center for seven hours! The time had flown. 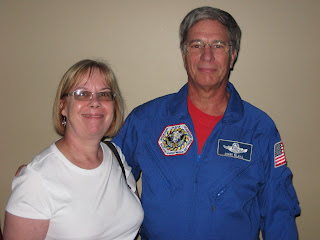 Our last port of call was to attend a Meet an Astronaut talk. the astronaut today was John Blaha who amongst many other things had flown on five Shuttle missions and had spent months on the Space Station.

He gave a good talk, and considering all his achievements was very down to earth (can an astronaut be down to earth??!) and unassuming. He talked about his time in the Space station with accompanying slides. He told us about some of the experiments they did. He also talked about how long periods in space affect the human body - it causes muscle wastage and loss of bone density. Even when they undertake exercise programmes to reduce this it still happens to a degree.

After the talk John said he would be happy to pose for photos for anyone who wanted one so I got my photo taken with him (not the most flattering picture of me unfortunately).

And that was it, the end of a long day at the Kennedy Space Centre. It was everything I'd hoped for and more. It was informative, fascinating and well worth the money. Being there took me back to my childhood, to the days when, as a wide-eyed youngster in times when anything seemed possible, I'd followed every step of the space programme. I still feel some of that wonder when I look up at the night sky even now. NASA wants to get people on the moon again and to venture further afield. Maybe some of the boys and girls that were at the Visitors Center that day will be inspired to become the astronauts of the future.
Posted by Sue Fell at 21:43