Florida Holiday Part 3 - The Back Country and Everglades

We had a long drive from Cocoa Beach to our next stop Chokoloskee Island on the West Coast about forty miles south of Naples. An American friend said that it was really away from it all but that's what we wanted for the Everglades part of the trip. There were places we could have stayed in Homestead/Florida City that were near a visitor's centre but we wanted to stay somewhere different, somewhere from where we could access the Everglades easily.
It was a long drive, six hours, but the roads were good and it was straightforward. Americans drive a lot slower than Europeans, the speed limits are lower too. I've also noticed that in general they are more patient and don't tailgate very often, so, though I was initially nervous about driving in the US (on the "wrong" side of the road!) I soon was very comfortable with it. Route 75, the Everglades Parkway, also nicknamed Alligator Alley, went straight through the Everglades, east to west. There were very few signs of habitation along the road, most of the time the road was just flanked by mile upon mile of Everglades grasses and mangroves.
We rolled into Everglades City, close to Chokoloskee Island. "City" was a bit of a misnomer which often happens in the US, the names of places often sound bigger than they actually are. Everglades City was a very small town, picture perfect, wide streets, wooden houses painted in bright colours, picket fences, very pretty - and very quiet.
After a couple of wrong turnings we found the road to Chokoloskee and were soon on the causeway over the sea that links the two places, being a small island we found our accommodation, the Parkway Motel and Marina, easily. The rooms were lovely, large (we had what the Americans call an efficiency - with cooking facilities), spotlessly clean, with chairs and table outside on the porch. The area was a mix of private housing, rentals, and motels centered around fishing which the area is well known for. It was neat and tidy and so peaceful. The sea was a short walk from our accommodation and we went there to watch the sunset. Chokoloskee is at the southern end of the area known as the 10,000 Islands, and there were various green flat islands on the near horizon. The sunset was breathtakingly beautiful, the only sounds were occasional bird cries.
The owners of the park were lovely and very helpful and we went to a restaurant in Everglades City they recommended. The Camellia Lounge was situated right on the Barron River and boats kept passing by. Being "in the sticks" the restaurant was full of friendly locals which gave it an authentic small town American feel. Whilst there a man was singing country songs on an acoustic guitar, now I'm not a country music fan, but here it was right somehow. We had a wonderful meal with the owners famous salads - all ingredients from her garden including orange marigold petals which made it look so pretty! 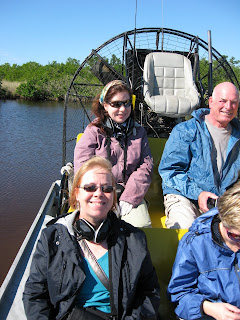 Next day we had a delicious breakfast at the Back Country Cafe in Everglades City before going to Speedy Johnston's place just up the road for an airboat ride in the Everglades. The boat we went on was small it took just six passengers (later in the trip we saw huge boats on the eastern side of the Everglades with at least 20-25 people on board). We left the dock slowly and the driver stopped and stood on his seat and looked around. Then he pointed out a large wake in the water and said "Look there, it's a manatee!" I was really excited and had hoped to see one in the wild. The manatee, on cue, slowly lifted it's head out of the water and looked at us, then he slowly dived down and with a flip of his thick rudder of a tail was out of our sight. A brief glimpse, but it made my day! The driver said that in January there are lots of manatees in the area.
We then continued on into the maze of narrow waterways flanked by mangroves, if you didn't know your way it would be very easy to get lost. But our driver knew every 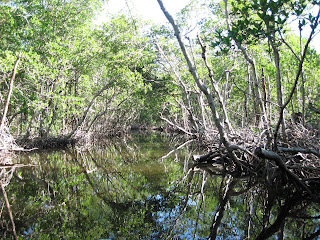 inch of the waterways, and at times really pulled out the throttle and we got a bit damp at times as we whizzed along, it was very exhilarating! He was also very knowledgeable about the Everglades.
The mangroves were amazing, their roots twisted into weird forms both above and below the water - the effect doubled by the crystal clear reflections in the water. Amongst these we saw plenty of alligators, seemingly nonchalant about the noisy boats passing by, not moving at all. Amazing vegetation, alligators, a manatee, egrets, herons, and turkey vultures circling on thermals high above made this a nature lovers paradise.
Afterwards we returned to Chokoloskee and visited Smallwoods Store/Museum. Ted Smallwood came to Chokoloskee Island in 1906 and opened a trading post and post office there. This store remained active, run by Ted and then his daughters, until 1982. Ted's grand daughter re-opened it as a museum and many of the items on show now are those that were there when the store closed.
Smallwood's was an amazing place, built on stilts reached by a flight of steps. Inside it was quite small and I felt like I stepped back in time when I entered, it was crammed with everyday items from the past, foodstuffs, magazines, household items and a life-sized model of Ted sitting in the rocking chair he always sat in when he was alive. There were ledgers and lists written by Ted, Smallwood family items and photos and a room that his daughters had lived in that was touchingly personal. 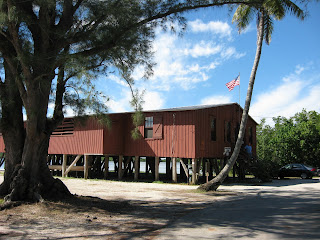 There was also an area dedicated to the history of South West Florida, and Ted's close relationship with the local people - he even spoke their language. The island was created by the Calusa Indians by making a shell mound, and indeed I noticed the white shells on the ground close to the museum.
In one corner there was a DVD playing showing how difficult life was in Chokoloskee in the past, Only the hardy could cope with life on the island then. Even electricity only arrived in 1955 when the causeway between it and Everglades City was built. All in all the small museum was an absolutely fascinating place that gave a good insight into life in this island in the past.
I again went to watch the sunset, as the sun dropped below the horizon a beautiful red glow illuminated the landscape. Chokoloskee was a place where nature still ruled, beautiful, sometimes harsh, but with an incredible timelessness and peace about it. I just loved it's quietness, the sense of being far, far away from the mad, modern world and I was sad to have to leave that all behind the following day. 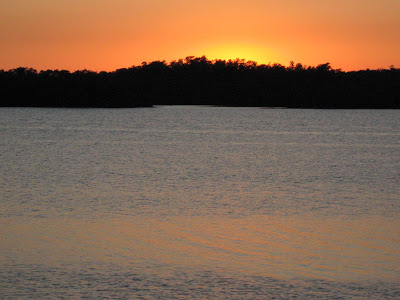