We left Grassy Key and headed south west towards our final destination, Key West. The southernmost part US 1 within the Keys is one of those American roads trips you should take. The road is a marvel of construction and the 113 miles passes through the coral and limestone islands from Key Largo to Key West crossing 42 bridges, including the graceful seven mile bridge. I thought that this southern part of the highway from Grassy Key was the most scenic, passing over and beside the sparkling azure blue ocean, palms trees, wooded islets and little habitation.

As we approached Key West it got busier and built up, but it was still clear this was not a big city. At mile marker 1 (everything in the Keys is measured from mile marker 0 in the centre of Key West to mile marker 156 in Miami, distances and addresses are measured by these markers - which are small green and white signs by the roadside) we knew we were close to our accommodation. And soon we found it, Authors Guesthouse on White Street.

The Guesthouse was lovely, a typical Key West wooden house with small cottages in the garden. there was an inviting jacuzzi and and lovely area to sit amongst the luscious vegetation in the garden. My room was upstairs and there was a wooden terrace area where you could sit and eat outside that looked down over the garden. The room was very comfortable, all the rooms were named after authors, mine was Wilder.

We decided to walk into the town centre to see the famous sunset celebration at Mallory Square, a must if you go to Key West. The one thing against our guesthouse was that it was quite a way out of the centre, it was a 25 minute walk. But having said that the walk was through the peaceful streets of old Key West past its lovely old white painted wooden houses. They were so pretty, some with intricate woodwork, others with turrets, lovely terraces or balconies. Being close to Thanksgiving some had displays outside. 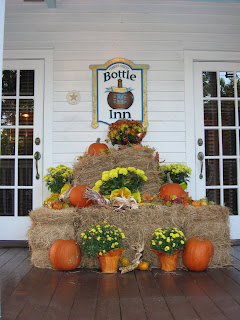 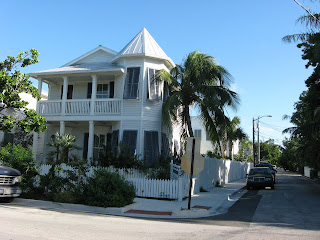 Duval Street, the main party/shopping area of Key West was manic, a real onslaught of the senses. Loud music - rock, Caribbean, Latino, swing, buskers, shops selling everything from upmarket to tacky, people from all over the world, many eccentrics, cars covered in shells, psychedelic bikes, this was the off the wall Key West I'd heard about.

We got a little diverted by the shops and by time we'd got to Mallory Square the sun had slipped below the horizon of the Gulf of Mexico. To be honest I wasn't bothered as I'd already seen such beautiful sunsets at Chokoloskee and Key Largo. Mallory Square was full of action with street performances by fire-eaters, clowns, escape artists to name a few. There were stalls selling everything under the sun, paintings, photographs, jewellery, food, the choice was endless. It was vibrant and fascinating, like Duval Street a place to see in Key West.

On our way back we stopped off for something to eat in a restaurant in the old Town about half way back to our guesthouse called Mangia Mangia. It was away from the tourist trap places on Duval, family run and served freshly made pasta. We sat is a delightful our door patio area with subdued lighting and lots of little fairy-lights in amongst the trees. Our meal was absolutely delicious, lots of it and reasonably priced, it you are ever in Key West I'd recommend going off the beaten track a little and eating here, you won't regret it. 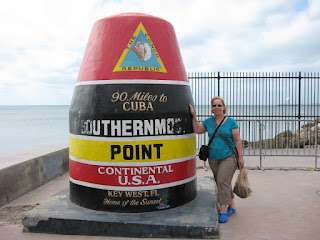 Next day Sylvia and I did our own thing for part of the day as we wanted to do different things. I walked through the warm sunshine and quiet, pretty streets to visit the southernmost point of the mainland USA. It was marked by large capstan-like structure painted in red, black and yellow stripes. Of course I had to have my photo taken there!

I did some shopping at the quieter end of the Duval Street before walking back to the guesthouse and spending the afternoon chilling in the jacuzzi and reading in the sunshine. This was the life!

That night Sylvia and I walked back into the town centre to the La Concha Hotel on Duval for The Original Ghost Tour. I always like to go on ghost tours as you find out strange and quirky things about places that way, also, I have an open mind about the paranormal.
Our guide was a tall, imposing young man called J, dress in black Victorian top hat and tails and a belt with a skull buckle. He set the scene well with much melodrama, but he also made it fun. He told us that if we got heckled when out in the streets he would count one...two...three and we were all to shout "you're doomed!
We went to various locations one being beside the Dean Lopez funeral home where we heard the story of Count von Cosel and a young Cuban-American called Elena Milagro Hoyos - don't read the next few paragraphs if you are squeamish! Von Cosel worked as an xray technician at a hospital in Key West and Elena, who was suffering from tuberculosis, became his patient in 1930. Though she was only 20 and he was 53 he became infatuated with her and was convinced she was the person "visions" he'd when young said he would marry (though he was already married). He showered her with gifts and tried everything to cure her but she died a year and a half later. She was buried in an above ground mausoleum that von Cosel paid for and which he visited almost every night.
Two years later von Cozel removed Elena's body and brought it to his house where he reconstructed it, replacing the skin with silk cloth soaked in plaster of Paris and wax and replacing the decomposed eyes with glass ones. He made a wig from Elena's own hair (that had been given to him by her mother after the burial). Von Cosel filled out the body with rags and dressed it in Elena's own clothes. He kept the corpse in his bed.
Seven years later 1940, Elena's sister Florinda heard rumors of von Cosel sleeping with the stolen body of her sister, she confronted him and found her sister's body at his home. Florinda notified the police and von Cosel was arrested and detained in prison.
Amazingly von Cosel was found mentally competent to stand trial on the charge of "wantonly and maliciously destroying a grave and removing a body without authorization." But after a hearing on October 9, 1940 at the courthouse in Key West, von Cosel was held to answer on the charge, but the case was eventually dropped as the statute of limitations for the crime had expired.
Afterwards Von Cosel moved to another part of Florida where he died in 1952. Elena was re-buried in a secret unmarked grave in Key West Cemetery. Not exactly a ghost story, but pretty weird!! 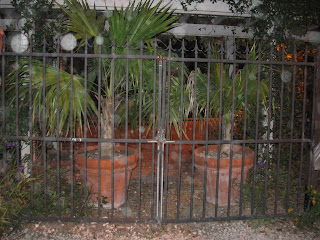 Outside the beautiful typical old-style Key West Artist's House Guesthouse we were told the creepy story about Robert the Doll who came to life and caused distress for many over many years.
Then beside St Paul's Episcopal Church is a small graveyard which includes the Sea Captain's grave amongst others. Many ghostly sightings have been witnessed here and on one of my photos (I took quite a few photos) there were lots of "orbs!" Orbs are said to appear on digital photos when spirits are around. It's the first time my camera has ever photographed orbs, so who knows what caused them eh? I've put the photo here, but you can only see some of the orbs on this reproduction.
J was very entertaining as we went on with the tour, we were frequently heckled and shouted back "You're doomed" with a laugh. J made sure that we were well frightened, fascinated and truly gobsmacked by some of the weirder stories from Key West's past.
So this was the end of my Florida road trip, the two weeks had passed by so quickly. Highlights? There were so many: The Kennedy Space Center that fed the fascination I have always had for space travel and the universe - astronauts are true heroes. The quiet beauty of Chokoloskee Island. The vast, alien world of the Everglades, heaven for those who love wildlife. Relaxing on a beach in Key Largo. Being in the water with dolphins at Grassy Key. Driving over the Seven Mile Bridge with turquoise blue water on either side. The contrasts of vibrancy and stateliness of Key West.
The ultimate highlight? That's easy, being "kissed" on the cheek by a dolphin called Santini!
Posted by Sue Fell at 00:56