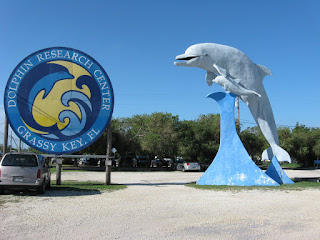 We continued driving down the Keys to our next accommodation, the White Sands Inn in Grassy Key. This was another lovely, laid back place right with a long jetty right on the shore of the Atlantic. Again the rooms were really nice with everything you need.

It was another pleasantly warm, sunny day as we drove to the Dolphin Research Center which, conveniently, was only a couple of miles form our accommodation. We'd booked a Dolphin Encounter where you actually spend time in the water with dolphins, something I'd always wanted to do, so this was going to be a special day for me. We chose the Dolphin Research center carefully to do this as we wanted to make sure that the dolphins were not being exploited in any way.

The center was smaller than I thought it would be and consisted of various building and netted off lagoons where the dolphins lived. The nets were not high and if they had wanted it would be very easy for the creatures to jump over them to the freedom of the ocean, but they chose not to. Most of the dolphins at the center now were born there, and there are also a few that were rescued and this place became their home.

We got there early and were free to wander around the center. We watched sessions with the trainers and dolphins and learned a lot about the creatures. Such as that they shed their skin every two hours to keep ultra smooth, they vocalise through their blowholes not their mouths, they have unique skin markings (you can only see that close up)to name a few things I remember. There were also various film you could watch throughout the day. 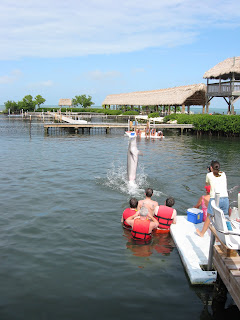 There was a Dolphin Encounter session in the morning (ours was in the afternoon) so we went to watch that so we'd know what to expect later. It was wonderful to watch, the dolphins seemed to love every minute and the people involved had big smiles over their faces for most of the time. Seeing the session made me all the more excited for ours in the afternoon.

After lunch we got ready and had our pre-encounter talk with a member of staff. She told us about the dolphins, do's and don'ts and to always do what the trainer tells us to do.

We then went to the lagoon, I noticed the dolphins really checking us out when we arrived, they rolled slightly to one side to look up at us. There was an underwater platform attached to each side of the small jetty. The platforms were about 3 feet below the water level and considering it was a very warm day the water was surprisingly cold! Luckily Sylvia and I got a platform to ourselves so we had lots of room to move about and had a good view of what was happening.

"Our" dolphins were Santini and Ras, mother and daughter. The first thing we were able to do was stroke their backs (careful not to touch the blowhole) as they slowly glided past us. Their skin was cold and smooth, a bit like rubber. Then we could "shake" flippers with them, they would rise out of the water and let you touch their flippers. They would also mimic you, I danced around and the dolphin "danced" in the water. Sylvia spun round she too was mimicked. The most amazing thing for me was being "kissed" by Santini. I bopped down a little in the water and she came to within a foot of me, then I put my hand under her chin and guided her to my cheek, it was such an amazing moment for me I almost cried! Afterwards I gently pushed her away and she swam off.

You could also have a dorsal fin tow around the lagoon. Unfortunately I couldn't join in with that as I'm having problems with my shoulder and wasn't able to swim out from the platform to hitch a ride with Santini and Ras. I was a little envious of the other people who were able to do that, it was amazing how the dolphins worded in unison to come each side of the person, close enough for the person to be able to hold onto their dorsal fins. It must have been such an exhilarating experience!

All through the Encounter Santini and Ras seemed to be having great fun, their bright, intelligent watching everything, they showed off leaping high into the air with ease, "walking" on water. I noticed that their tongues were very pink and had kind of frilled edges and they had lots of very small, conical teeth.

All too soon our time was up and after having a fun splashing fest with the dolphins we left them in peace in their lagoon. I felt really privileged (and lucky)to have had the chance to interact with these wonderful creatures, humans and dolphins really do seem to have some kind of natural "connection". I'll never, ever forget the time I spent with them, I won't even try to put it into words, all I can say is this was the highlight of the trip for me.
Posted by Sue Fell at 15:47