Yesterday I went to an exhibition of photographs of Iceland called Ultima Thule by Stephen Vaughan.  Ultima Thule is Latin for "farthest north" which to the ancients were far northern lands on the edge of then known civilisation.  The Greek explorer Pytheas made a true voyage of discovery 2300 years ago when he travelled around the British Isles (it is thought he may have been the first person to use the name Britannia) and on to Iceland.  The photographer says this work was inspired by this voyage.
Of his photos Vaughan say.  "My photographs depict some of the rawest and youngest surfaces on Earth, allowing the viewer to imagine the prehistoric beginnings of the landscape, void of any presence or history."
The photographs are in colour and black and white and vary in size from small to very large indeed.  They depict Iceland's stunning primeval, volcanic landscapes and glaciers with no hint of human habitation.  The sheer wildness of Iceland and that it is a land that is literally being born under my feet was what caught my imagination when I was there.  And these aspects of the country are caught perfectly in the photographs.  The rugged, fractured landscape where the land is being torn apart by tectonic plates.  The steaming earth and sulphurous pools that give some clue to what is happening below the earth's surface.  Glaciers streaked with blue and debris - sometimes a rock precariously straddling a crevasse.  An iceberg stranded on a beach like an sparkling blue white sentinel, are amongst the the photos in the exhibition.   Nature is in still in charge in Iceland and it is rather nice to know that.

The startling lunar-like beauty of Iceland is caught well in these photos and it made me want to go back so much!  Since my visit last year that amazing country has held me under it's spell and, one day, I will go back. 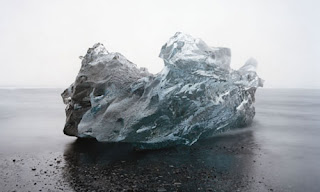 The exhibition in Tullie House Museum and Art Gallery, Carlisle runs until February 6th.  It is an Impressions Gallery Touring Exhibition so it might come to a place near you.  I would recommend a visit if it does.
Posted by Sue Fell at 01:04