Debbi and I met up in Manchester -  we were so lucky that the wintry weather had abated just days previously and we had no problems getting from our homes to Manchester.  Unfortunately though fog proved to be a problem, delaying the incoming flights from Dublin, including our plane.  However, we were only delayed about 40 minutes which wasn't too bad.

We were chatting away as we were descending into Dublin when suddenly the plane made a very sudden, steep climb, I could hear the screech of the engines as they powered the sudden ascent.  Everyone went strangely quiet, knowing there was some kind of problem.  Shortly afterwards the pilot announced that the piece of machinery that aides an automatic landing in fog was not working and that's why they aborted the landing and that they had to do "a bit of work to do" on the flight deck.  The plane remained very quiet, I don't particularly like flying and this didn't help my now well controlled fear of flying!  But, 20 minutes later we landed safely - phew! 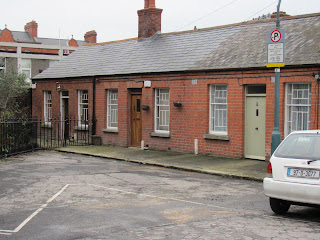 We got a bus to South Great Georges Street near Dublin Castle.  We were met there by Sean, the owner of the cottage we were renting for our few days in Dublin.  It took us ten minutes to get to the cottage off John Dillon Street in The Liberties.  The cottage was one of those small, one story homes that you see all over the city, this one was set in a small square of six cottages, with the old Dublin city wall running along one side.  Our cottage was so cute, with fabulous original window panes on the frontage.  It had a sitting room, two  bedrooms, a bathroom and kitchen - all small but well designed and it had everything we needed.  There was even a little yard with a seat at the back.  It was cosy and had a lovely feel about it, it was very homely - we loved our little cottage from the word go.


Our first job after unpacking was to go to the nearby shops for some provisions.  The area was mainly residential terrace houses set inbetween Dublin's two main cathedrals Christchurch and St Patricks. The area is known as The Liberties because being outside the city walls the areas had been self ruling to a point.
That evening we had been due to go to Dun Laoghaire for dinner with friends.  However, a family illness meant that had to be cancelled.  So, instead Debbi and I stayed in and had pizza and wine - lots of wine and talked for six hours solid!  You certainly know when you are with a good friend when you can just chill and chat like that.
31st December 2010
﻿﻿ 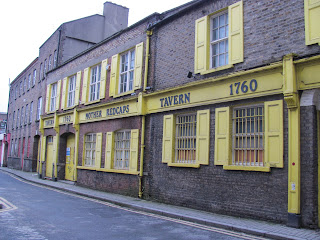 I had a bit of a bad head today!  LOL.  I went out for a walk around the local area to clear my head and took a few photos along the way.  This area is a stones throw from Temple Bar, yet is very quiet.  Near our square was the back entrance to a grand, derelict building called The Iveagh Market, that fronts onto nearby Francis Street.  It was built in 1902 to house market traders who previously sold their wares on the local streets.
Also nearby was Mother Redcaps Tavern, built 1760, once one of Dublin's premier live entertainment pubs, now closed.  Both these building were earmarked for demolition to make way for apartments, offices, hotels, but since the recession has hit Ireland these buildings may actually be saved from destruction and the area will keep it's strong sense of history.  Too much of Dublin has been turned into characterless concrete, steel and glass.
﻿
﻿We took it easy that afternoon (this was to be a very taking it easy type of holiday
We always enjoy our meals there and this night was no exception.  We both chose the same courses.  Goats cheese and beetroot starter, ribeye steak main, and an assiette of desserts (small portions of all the desserts on offer) all of which were delicious.  We washed it down with a delicious Valpolicella, c'est la vie!  The serving staff pour your wine for you, but I wanted Deb to have more than me as, due to my hiatus hernia, I have to be careful about how much I drink (and I can only drink good red wine lol). So I tried to sneak more wine into her glass only to get caught by our waiter who said to Deb.  "I wish I had a friend who poured wine like that!"
We got a taxi home but, as is often the case in Dublin, the driver had no idea where our cottage was, or even the quite big street that the square led off from, and not being very familiar with that area we couldn't direct him.  "I'm not trying to cheat you" he kept saying, he seemed genuine and had no sat nav, so we asked him to drop us at Jury's Hotel at Christchurch as we could easily walk from there, otherwise we could have been going round The Liberties getting nowhere forever!  He took five Euro off the meter price too which was very fair.  Those Dublin taxi drivers should have to pass The Knowledge like London cabbies do!

We relaxed in our cosy cottage for a while before leaving at 11.40pm for the short walk to Christchurch Cathedral, the traditional place for Dubliners to gather to see in the New Year.  The cathedral looked beautiful all lit up in the night, the bells were ringing out as if calling the people and I was very aware of being part of something that had probably gone on for hundreds of years.  The bells stopped at around ten to twelve, by now there were hundreds of people there and the gardai had closed the road.  Then at twelve the bells chimed in 2011 and people cheered, hugged, drank champagne, set off sparklers and sky lanterns started appearing in the sky, it was a lovely atmosphere, happy and very good humoured.

Soon the people started dispersing and we headed home. St Patricks, Dublin's other major cathedral, further down Nicholas Street also looked beautiful, its floodlit spire all lit up, it's bells ringing out too.  In five minutes we were home and we opened a bottle of Prosecco, we couldn't find a bottle of our usual celebration tipple, Veuve Clicquot, in the local shops so this was our second choice, and it was lovely.
We had kept our Christmas presents to open, strangely we bought each other similar presents!  We stayed up until 3am enjoying our Prosecco and chatting.

We had a very lazy morning, in fact we never saw the morning lol!  We find as we get older we can't just bounce back from late nights drinking a pleasant wine - we need time to recover.  Once up, dressed and awake I had another walk around the local area and bought a few things at the shop.

We had intended to walk to Grafton Street to see the lovely chandelier shaped Christmas lights we'd glimpsed from the taxi on the way to the Town Bar and Grill and to look at Brown Thomas's famous Christmas windows.  But it started raining really hard, and our little cottage was so snug and warm that we didn't need a lot of persuasion to stay in.  We have visited Dublin many, many times and seen all the sights so don't feel that we have missed out if we do this.

At 8pm we walked to The Tea Room Restaurant at The Clarence Hotel, just a ten minute stroll from our cottage, the rain had eased off by now.  We were given our usual table in the corner and ordered from the Market Menu which at E25 for three courses is very reasonable.  The waiter came to take our order then he said that a bottle of wine with our meal would be complimentary.  We thought we had heard wrong, but he repeated the same thing and asked if we had chosen a wine, we had and, still mystified, ordered a bottle of Chianti.

I had the salmon fishcake with a lovely mayo dressing for starters, then ribeye steak again for the main.  It was just as good as the one at the Town Bar and Grill, but different, as it had a delicous marinade on it.  It came with the most fabulous, crispy chunky chips.  For dessert I had chocolate fondant, with banana ice cream and toffee sauce.  Oddly, before we'd left our cottage I'd said I fancied fishcake for starters and chocolate fondant for dessert, how lucky was I?  The free wine was lovely, and we still don't know why we got it.  All I can think of is because we have stayed at the Clarence Hotel, including the penthouse, a few times and are regulars at The Tea Room.  It was a very nice gesture from the hotel and much appreciated.

After the meal we went through to The Study for cocktails and sat there for a while.  There was a pretty Christmas tree in the corner and it was very pleasant and relaxing in there.

We left the hotel at midnight and were soon home.  We didn't stay up too long as we had to be up early the next day as our short trip to Dublin was now over - though we did consider squatting in our little cottage as we loved it so much and didn't want to leave it!
Posted by Sue Fell at 23:08