I haven't been very inspired to write my blog recently, don't really know why.  Maybe it's something to do with the January doldrums.  There's been the social whirl of Christmas, the hopefulness of the New Year and then there's January.....  The most dismal day of the year is said to be January 17th, when real life hits people again and the bills roll in - and the weather is crap and I'm one of those people that is affected by the weather.  Yeah, I can actually see why I'm not that inspired at the moment lol! 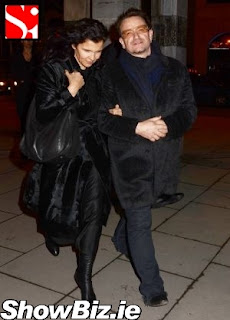 Anyway, bits of U2 news.  Rumours abound that Adam, at long last, is a dad.  It's said he has a son who is already about a year old, how was that kept quiet for so long?!   If it's true, (it hasn't been officialy denied or confirmed) I'm really pleased fo Adam, he seems to be happy and settled in his life now.  Read the article that first broke the news here
Bono's been back home in Ireland again and was eating out at a posh restaurant with Ngozo Okonjo-Iweala, Managing Director of The World Bank.  Read more here along wth a few photos - looks like it was a windy night!

And that's about it.  Well, except for the Spiderman Saga which I'm not really that interested in, it just goes on and on. The opening night has been put back yet another month.  Yawn.

So, off I go back into dismal January, but the good news is that days are getting longer!
Posted by Sue Fell at 00:03