A Day Out in Another World

I met up with my friend Alison today.  We live about 60 miles away from each other and try to meet up once a month either nearer where she lives or nearer to me.  This time it was near to me and we met up in Langholm, a small town in the Scottish Borders.  Langholm is situated on the River Esk and surrounded by hills, the highest, Whita, has an impressive obelisk dedicated to Sir John Malcolm the soldier and politician, at its peak.  On a clear day the obelisk can just be seen from Carlisle 20 miles away.

Alison and I had a lovely, and very cheap, lunch in the Crown Hotel on the town's main street.  We then set off for Eskdalemuir and the Kagyu Samye Ling Tibetan Centre 13 miles away.  It was one of those beautiful, crisp winter days with blue skies, sunshine and frost that didn't melt.  We travelled on a road through beautiful countryside of rolling mountains, pine and deciduous forest, a landscape that was mainly uninhabited except for occasional farms and the tiny hamlets of the odd-named Bentpath and Eskdalemuir.  We passed only a handful of other cars on the road.   At one point we noticed people in the fields on a grouse shoot, it was weird to see men walking along with rifles. 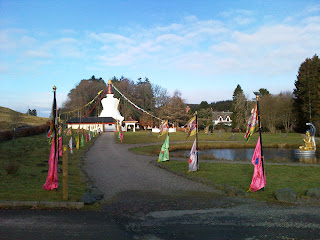 Just beyond Eskdalemuir we came to Kagyu Samye Ling Tibetan Centre.  This was set up by Tibetans in 1967 and is now a thriving community complete with temple.  Many, many years ago this was where I saw the Dalai Lama when he visited the centre.  I stood amongst the crowd and listened to him speak.  I have aways been a bit of closet Buddhist and was entranced by the Dalai Lama.  He was so wise and charismatic, yet he also was very human and had a wonderful sense of humour and an infectious laugh that made you smile too.  I feel lucky to have seen him in person. 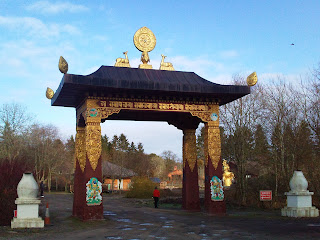 You can wander around the complex freely.  We passed by an avenue of multi-coloured prayer flags flapping in the wind that led to a huge white stupa shining brightly in the winter sunshine.  A short distance from this was a huge golden gateway covered in brightly coloured paintings of gods.  We passed through the gateway and saw a beautiful golden Buddha in an area that seemed to be being developed into a garden area.  The statue it was so serene and the gold shimmered brightly in the sunlight. It had a plaque on it saying 0700 hrs 7.7.2007, obviously an auspicious date.
We walked on into the complex where we first headed for the temple.  We could hear that a ceremony was going on as we took our shoes off outside.  We stepped inside and  into another world.  It was an intricate kaleidoscope of colours and gold featuring gods, golden Buddhas and animals on the walls and ceiling, monks were chanting accompanied by the clash of cymbals and huge, loud drums.  The steady beat of the drums and cymbals was almost hypnotic and it was also quite relaxing, it was really like moving into another world.
We left the temple and put our shoes back on and went to the shop.  There was building work going on and we had to walk round the building twice to find the entrance!  There also is a lovely little cafe on the site that has homemade vegetarian food, but as we'd had such a good lunch we didn't go in there this time.  After that we headed off back to Langholm, sufficently chilled out by our little steps into Scotland's Tibetan world. 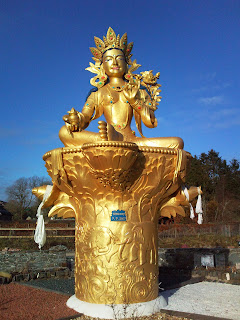