Brrr it's been cold today!  I met up with my friend Alison and we went to look round the Christmas Market in the town centre.  It's not really very Christmassy, it's just the usual continental market that comes here every now and then.  But I love pottering round it and taking in all the sights and smells of the varied foods available.  I was looking for a warm trapper hat with long flaps and found the perfect one there, just what I need in this nippy weather.

We then went round some of the shops in the shopping precinct, Alison bought a couple of tops but I didn't buy anything, still enjoyed pottering around window shopping though.

Then I gave Alison a tour of old Carlisle, she lives in the Scottish Borders and doesn't know the city well.  We first went to the cathedral, which, though small (it's the second smallest cathedral in England), has many special features.  It was established in 1133 and somehow has survived fires, wars and numerous border raids by the Scots - Carlisle, being a border city has had a lot of strife and has been both English and Scottish numerous times in the past.

The barrel vaulted roof of the cathedral dates from the 14th century and is painted sky blue with golden stars, it is generally quite dark building and looking up to the ceiling feels like looking at a bright blue summer sky.  The most famous feature of the cathedral is the east window.  It is in the most complex English Gothic style,  the Flowing Decorated Gothic. It is truly beautiful when the sun shines through it.  Much of the window still contains the original medieval glass. 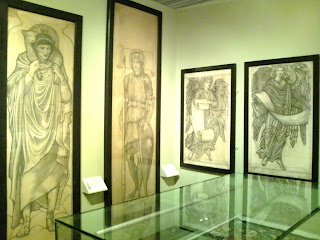 The choir has forty six black oak misericords - hinged seats.  The misericords are carved with various, often fantastic, scenes, hybrid creatures, angels, scenes from legends of the Apostles, St Cuthbert, St Augustine and others.  Some of the seats have traces of burns from where monks had fallen asleep in services and burned them with the candles they held.  A nice human touch!

From the cathedral we walked the short distance through the grounds to Tullie House Museum and Art Gallery.  First we went into the gallery (free entry) which has an extensive and nationally important Pre-Raphaelite exhibition.  These form part of the part of the museum's Emily and George Bottomley bequest, which came to Tullie House in 1949. I have always loved Pre- Raphaelite art - even years ago when it wasn't "in fashion", now it is appreciated as it should be once more.  As a young teenager I often used to go to the art gallery to look at these paintings and drawings.  As well as loving to see the exhibitions I've always liked the "feel" of art galleries and museums, it's like stepping into another world.  Tullie House itself is a beautiful building, with well preserved marble staircases, ironwork stair rails and gorgeous ornate wall tiles.
We then went next door to the museum - once Carlisle's main library, another place I spent a lot of time in.  We went into the Little Black Dress exhibitions.  this is about the history of the Little Black Dress (LBD) from Victorian days until the present day.  I found it absolutely fascinating.  It looked at the psychology of black clothing to the influence of designers from Coco Chanel (who created the original "Ford" black dress in the 1920's). It looked at the role the LBD played in Hollywood with actresses such as Greta Garbo, Gloria Swanson, Audrey Hepburn and Marilyn Monroe.  In the background all the while was the moving, mournful singing of Edith Piaf, who, of course, always wore a LBD. 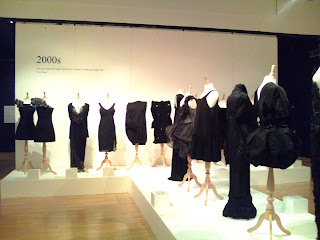 The exhibition was set out in decades and the ones that stood out for me were the 30's, 60's and 80's. The glamour and elegance of the 30's was captivating, the dresses were beautifully designed and would make you feel like a million dollars.  The 60's dresses were new, vibrant, young heralding a new age.  There was a photo of Twiggy in a little black Mary Quant mini dress.  It is easy to forget how mind blowing that was at the time.  I'm old enough to remember those times (I was VERY young though LOL!) and nothing like it had been seen before.  It was youthful and of the future, when anything seemed possible. The 80's stood out for me for the wrong reasons as the fashions were so awful then, even the LBD.  Dear me.


Every woman knows a LBD is an essential part of any wardrobe. It can make you look fabulous and feel a million dollars.  No wonder it has been around in many versions for almost a century. If you can, go to see  this free exhibition, it's well worth seeing. It's on until February 26th. So that was our day out in Carlisle, we saw a lot and spent next to nothing, that's what I call a good day!