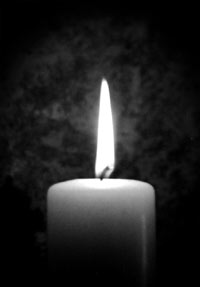 My cousin Glen and I went to the Candlelit Concert in St Cuthbert's church tonight.  This is an annual event here, we don't go every year, but decided that we'd like to go again this year.  Rock music is usually my thing music-wise, but I have always liked some classical music.  Maybe that's because I grew up with a mother who loved, Strauss, Wagner, Verdi and Rossini. Classical music was part of my growing up, always being played on the record player.

We first had an Italian meal in Franco's, which didn't turn out as relaxing as we'd hoped.  Glen arrived twenty minutes late as she's forgotten the tickets and had to go back home to get them.  Then we had to wait a long time for our food (they were very busy.)  This meant we had to rush our main course (which was a shame as it was lovely) in order to get to the nearby church on time.

St Cuthberts dates from 1778 and is thought to be the fourth church on the site.  It's an Anglican church but set up more like a Methodist one, with an upper gallery around three sides.  The windows depict the life of St Cuthbert who was an important saint in the north of Britain. It was painted in white, turquoise and gold.

The musicians were The English Philharmonic Ensemble and the choir was The Beverley Singers.  During the concert the lighting was from two large candelabras hanging from the ceiling and four large candle stands, all filled with candles.  The only electric light was a few spots of light around the huge arch in front of the altar.

Some of the music I enjoyed some I didn't so much.  I did like Clark's Suite for Trumpet and Strings, sounded very of it's time late 15th/early 16th century.  Then there was Vivaldi's Winter was as dazzling as ever, amazing how someone can put winter into music, I could almost see the snowflakes falling!  Lovely.

In the interval we went out into the crisp, frosty night and walked the short distance to the Tithe Barn which is the church hall, where you could buy traditional Christmas Fayre of mulled wine and mince pies. I don't like either so I didn't buy any but i wanted to go into the building because it's such a historical place.  Dating from around 1480 it has had many uses over the many yea s of its existence as well as collecting tithes and by 1970 was quite derelicts.  But, thankfully, St Cuthbert's restored it and it is now regularly used by the church and other organisations.  It's a fantastic building with an impressive roof of oak beams and rafters, and you can "feel" the history of it.

A little Oriental girl came out to play Silent Night on the violin.  There were a few off notes but it was generally good and she was only five, she has some future ahead of her!  She looked cute in a scarlet dress with her hair in pigtails and was not fazed by performing in front of all those people.

I'm not a fan of hymns, but I do love the Christmas carols, they are uplifting and great tunes. The carols in this concert were Once in Royal David's City and O Come All Ye Faithful sung by the choir and audience, and made me feel all Christmassy.


The final performance was from Handel's Messiah.  It was brilliant, the "Hallelujah Chorus" made the hairs on my neck stand up, powerful stuff!  This was only a small orchestra and choir, seeing it on a bigger scale must be mind-blowing.  It was a great way to end an very enjoyable concert, I'm definitely in the Christmas spirit now!

(I wasn't having a good photography night, most of my photos didn't come out, but I've included the ones that did in the article.)
Posted by Sue Fell at 18:46