Sunshine, Glastonbury and Big Brother - It Must be Summer!

We've been having a wonderful few weeks of sunshine, in fact it has een so dry there is talk of a water shortage on the books soon!  For me Glastonbury has always signalled the start of summer.  I've never been in person but have always watched it live on TV and seen many a fledgling act that has gone on to become famous there.  What I love about Glastonbury is how different it is from other festivals,  it has such an eclectic mix of acts and audience who just seem to love every minute of it.  Where else can you see Rolf Harris, Willie Nelson, Vampire Weekend, Pet Shop Boys, Ellie Goulding and Snoop Dogg on the same bill? Even during the many years when the festival has become a mudbath it doens't dampen the fun. 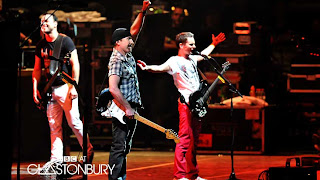 I've just watched Muse's set and, unlike last night's headliner Gorillaz (who were a poor substitute for U2), they were stunning.  And our man the Edge did make an appearance when he played  Where the Streets Have No Name with Muse, Matt Bellamy being a worthy stand in for Bono.  Great to see Edge and the song get a positive reception.  There was an interview with Edge afterwards and he said how much he enjoyed playing with Muse.  When asked how Bono was he said he was working on his rehab and that it would be a "race" for him to be ready for Turin but that he hoped he would be ok for it.  He also said that U2 had to do Glastonbury in the future, but didn't say they would be there next year.  A couple more photos of Edge with Muse can be found here

Here's the Muse/Edge performance of Streets: