Shakespeare at the Priory 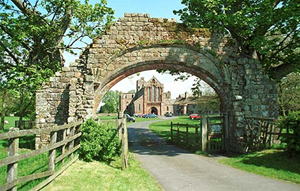 I saw A Midsumme Night's Dream again the other day -it was performed in the open air at Lanercost Priory as part of the Lanercost festival.  It was just a local production and not as professional as the one I saw at Theatre by the Lake a few months ago.  But you couldn't beat the location, the priory was founded in 1169 with stones taken from the Roman built Hadrian's Wall which ran close to the site.  It is now a picturesque ruin.

The play was performed right beside the priory and it was the first time I'd seen a play performed outdoors and A Midsummer Night's Dream is the perfect play to see that way as it is mainly set in the forest. It was magical to watch the story unfold as the swifts swooped low, their piercing call echoing within the walls of the ancient buildings, (which were around 400 years older than the priory itself) whilst wood pigeons cooed contentedly in their perches in nearby trees.  Nature's magic was all around us and on the stage and it was a lovely experience to see my favourite Shakespeare play in this way and luckily the weather was perfect.
Posted by Sue Fell at 23:57