RED announced a new multi-media campaign that will include a new film directed by Lance Bangs and executive produced by Spike Jonze. The documentary is called “The Lazarus Effect” and borrows its name from the remarkable transformation of people infected with HIV/AIDS when given access to antiretroviral medicine. It will premiere on May 24th on HBO at 9pmET/8c, YouTube and Channel 4 in the UK.

On 4th May there was an event at the Museum of Modern Art in New York to promote "The Lazarus Effect" amongst the many well known people to attend were Bono, Ali and Adam.  It's amazing how One and RED have grown, and are really making a difference and it's all thanks to the B-man for starting it all off!  I really admire him for all the work and time he puts into his humanitarian work.

Lovely photo below taken at the event.  Adam looking better as he grows older (and I think must have been bending at the knee or Bono and Ali were standing on boxes!), Ali as beautiful as ever and I like Bono's hair. 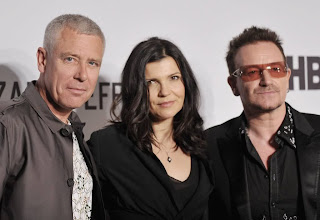