Here, There And Everywhere

I really wonder where Bono gets all his energy from, he has the most amazing hectic lifestyle. Here's a quick rundown of his wanderings over the last week:
21st April
Attends the Food Bank for New York City's Sixth Annual Can-Do Awards
22nd April
Attends the Tribeca Film Festival kickoff dinner in New York hosted by Vanity Fair magazine.
24th April
He has crossed the Atlantic to attend the funeral of Sir Clement Freud in London with Ali.
25th April
Attends the public wedding ceremony of actress Salma Hayek and husband Francois-Henri Pinault in Venice.
27th April
Out for dinner with his mates in Dublin. 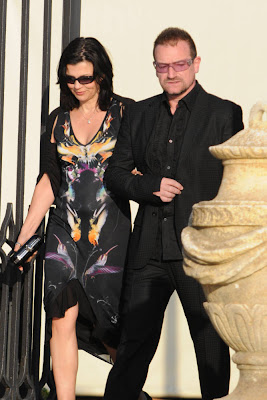 Bono and Ali at Selma Hayek's wedding in Venice