Monaco - California - Cannes - in a Week!

First there was Bono's 48th birthday, celebrated a day early, on May 9th in Monaco at a small party with the likes of Brad Pitt and Prince Albert. He was toasted with champagne and strawberry cake!
The reason for the early birthday party was soon clear - the next evening where was Bono - why in California of course! He was guest of honour at Claremont College for the Performing Arts.
Then today he'd returned to Europe and was at the 61st Cannes Film Festival which he visits almost every year. Bono and Sean Penn took to the red carpet for the film premiere of "The Third Wave."
God knows where he's been in between these publicised trips, what an amazing life he leads!
Really like these two photos from Cannes, love how Bono's standing on the sides of his huge shoes in one, and then a funny moment is captured by the camera in the second. 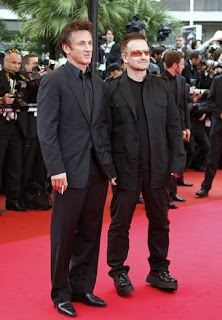 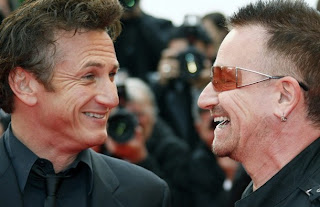