My holiday did not get off to a good start the taxi not arrive on time so I rang - oh said they, it's been booked for 2am! WHAT?? I asked for a taxi to be sent NOW. There was a 10 minute wait and I watched the minutes tick by. Once the driver arrived and I told him what had happened he ended up more anxious than me about getting to the station. On the way he told me how crap the dispatch staff were at the taxi company! I made a mental note to never use that company again.

The taxi got to the station with one minute to spare, the driver shouted,

I rushed in, the train arrived a minute later, and soon I was safely on, phew! the journey was uneventful and I met up with my friend Julie at Manchester airport and we went to the airport Travelodge where we were staying overnight.

Got up 9am and went to breakfast. It was a shambles to say the least. Both hot water and coffee machines were not working but there was no sign on them to say so. The only way for ALL customers of getting hot water was via one small electric kettle that was a slow boiler! There were no cups, glasses, juice, croissants, muffins, grapefruit, or coffee. There were only 2 staff in the very large restaurant and they tried their best but could not cope. People were getting very annoyed and asking for money back. I will be writing a letter of complaint when I return home.

Our flight left on time and was only 3 hours to Preveza a military airport on the Greek mainland. Lovely area, lots of green islands, many very rugged, inlets, bays, flanked by huge mountains on the mainland. It was mild with sun and blue skies, great to have left that rain and grey behind in Manchester.

We were quickly through passport control and got our baggage. The First Choice rep greeted us with,

We did a double take, had we come to the right place?? She quickly realised and said she'd been in Egypt last week! We were transferred to our hotel with another couple by taxi. The journey took about half an hour along winding roads then across a causeway and onto Lefkada.

Our hotel was thehe Ionian Blue built onto a hillside right to the sea overlooking a sea strait flanked by large mountains. Our room faced this gorgeous view, it was an absolutely stunning sight. The room was lovely, modern with a large balcony where you can relax and soak in the view.

This was our chill out day and we explored our hotel. It was set into the steep hillside in a series of terraces reached by lifts and wooden walkways. It was very well designed, with lots of areas to sit and from nearly all you could see the blue of the Ionian Sea.

We went down to the pool area which was quiet as was the whole hotel it was the first week of the season. There was a beautiful infinity pool with wooden boarding around it all very modern as was the whole hotel. We lay there for a while in the sun until it got too hot for me and I went for a walk through the gardens to the seafront. It has boardwalks with loungers and umbrellas, very peaceful right beside the sea and, again, not very busy, no fighting over sun loungers here! Swallows swooped and soared all around the hotel. There were even some swallows nesting the hallways and I learned that a swallow chatters just like a budgerigar! Every time I see a swallow I will think of this beautiful hotel and Lefkada, as they are everywhere.

We went to see our rep Joanna for the welcome talk. We booked three trips, one round Lefkada, one island hopping, and one Greek night on Meganisi. We’ve also booked a pampering treatment in the spa here at the hotel.

We were early for our trip around Lefkada today. We were picked up outside the hotel at 9.35 and drove up the coast to Lefkas Town right at the north of the island. The bus only had about 16 people in it - we are quite happy about that!

We went past the fish ponds and over the bridge onto the mainland to see St Mavra Castle. It was very ruinous but picturesque and in one corner was a sweet little Orthodox church. It was tiny and very primitive. It had once had beautiful frescoes on its walls but they were covered up with white plaster by the Turks. There was an icon with flowers draped around it - an Easter tradition (their Easter was last weekend). Plus hanging around it were votives for health, babies, relatives who had passed over etc. 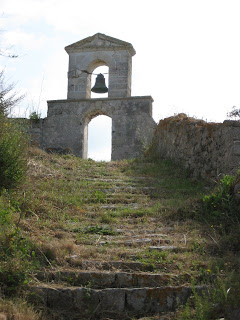 We went back to Lefkas Town to look around the small archaeological museum there, but when we arrived there had been a power cut so we did not go into the exhibits. We had decided to go back on the coach to our next stop, a monastery. We’d just sat down on the bus and they rang Joanna to say the power was on so we trooped back in. We were half way round and the power went off again, so we gave up for good this time and went onto our next destination! We passed by the only set of traffic lights on the island which Joanna said rarely work, and sure enough they didn't!

We travelled on the a monastery called Faneromenis. The church here was much grander than the little church in the castle, it reminded me of one of the Ukrainian churches we had visited, lots of gold glinting everywhere, chandeliers, icons. Up a few steps leading off the main church was a little chamber with hundreds of metal incense burners hanging from the ceiling, icons and a stand to place candles in memory of departed loved ones, I lit a candle for my mother. All the candles created a beautiful flickering light and atmosphere. While I was there two old women dressed in black came in, kissed and touched the icons, prayed out loud and lit candles.

Outside there was a mini zoo of goats, birds, an ostrich, chipmunks, and peacocks, one of which was pure white and he gave us a wonderful display by opening his tail and strutting about. There were also stunning views from the monatery down to Lefkas Town far, far below.


We then travelled up and up into the huge, craggy central mountains to Joanna’s home village, Karya which is still very traditional with a pretty square. Joanna told us her grandmother had 18 children, the last being twins at the age of 55!! She must have hundreds of cousins!

We wandered about the village went into an embroidery shop and both bought lovely cushion covers, mine had turtles on. I also bought a cardigan/shawl which will look great either for casual or dressing up. We saw a few postcards but they must have been on display for years as they were all faded and curling up at the corners! Needless to say we decided not to buy any!

We had a few drinks in a café on the square run by a Greek and his English partner who was a real character, you wonder how a middle-aged English woman ends up in this village high in the mountains of Lefkada . The postman passed by and she said he hardly ever gets to deliver anything! We saw him pass by 3 times in the short time we were sitting in the cafe with the same small bunch of letters in his hand. As we left we saw him sitting and smoking in the tiny post office, letters beside him.

The driver now headed towards the west coast of Lefkada over rugged hills and sweeping deep valleys, full of yellow and purple flowers and the eternal grey-green of the olive trees. Soon we had stunning views of the west coast from up on high, it was less green here and rockier. We manoeuvred round the tightest hairpin bends (thank heavens there isn't much traffic !) gradually getting lower and lower and eventually got to the sandy beach of Kalisthma. It was a lovely location surrounded by towering hills, the beach was long and sandy and not a single person was on it!

We had a packed lunch here of a large ham and cheese salad roll, lemon cake, banana and soft drink . We ate it at a very modern bar called Copla right on the beach, it was warm and sunny and we were shaded by large umbrellas. all very relaxing

Then on it was to our last stop a Vassilikis right on the south of the island. It was a lovely bay full of windsurfers and boats, with shops and tavernas hugging the harbour. It was a lively place and for the first time we were able to have a look around some shops!

Joanna told us that Lefkada was named after a cape at the south of the island that has a lot of white rock, "lefko" means white in Greek.

We travelled on north once more along the east coast of the island, and around every corner was another stunningly beautiful view, Lefkada is a gorgeous island. We were dropped off at our hotel after an enjoyable day that gave us a good overview of the island.