Our Island Hopping trip today started at Nidri a large village 5 kilometres south of our hotel. Our boat was the Nicholaos, was a nice and quite modern. The weather was a bit iffy, a bit of cloud, and we weren’t sure how the day would pan out.
We set sail for the island of Meganisi at 9.40am and pulling out of Nidri we could see what a lovely location it was, the village was backed with craggy mountains and a green, mountainous promontory reaching out from the mainland and wrapping itself around the bay making a large natural harbour.
On the way to Meganisi we passed numerous green islands, and in the distance peaks of the Greek mainland, Ithaca and Kefalonia. We sailed down the western side of Meganisi , which apart from 3 villages on the north of the island, is quite wild. We were headed to a cave towards the south of the island. We were able to sail right in, the resident seal that is regularly seen there was resting on the little beach inside, but put to flight very quickly as the boat chugged in disturbing her rest. It was pretty inside with very blue and clear water and amazing striations and rock formations that looked almost like abstract art.
After this we sailed back up the coast of Meganisi, we saw wild goats scampering on the steep cliffs topped by verdant greenery that characterised the coastline. We sailed into a picturesque bay on the north of the island which had a village perched high above it. Joanna said it was a pretty, traditional Greek village, Spartochori, and we could walk up to it if we wanted. Seeing how high it was I wasn’t sure but decided to go because it sounded lovely. The first part up a fairly steep road with lots of hairpin bends wasn’t too bad, but then came steps, a lot of them! Hard work but we got up there and the view down to the harbour and beyond was stunning. 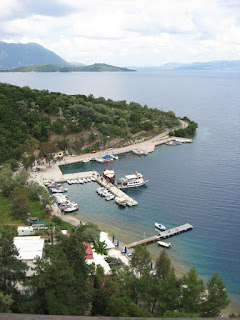 The village was lovely, very Greek with lots of colour and whitewashed walls. Narrow, winding cobbled streets , cats lying silently in the warm sun, that peace and quietness was so relaxing, such a different world from my own. I could have wandered through those narrow winding streets for hours, but we didn't have much spare time.
We had a drink in the Lakis taverna, where we would be returning the following night for a Greek evening. We were pleased to hear that Joanna has a deal with the one local taxi to take people up to the village from the harbour - so no traipsing uphill again!
We slowly made our way down the hill admiring the view as we did. It was so much easier going down! We reached the pretty little harbour and got on board the Nicholaos once more.
The Nicholaos headed further round the craggy coast of Meganisi to the beautiful Bay of Atherinos where we were going to have our barbecue. The bay was like an angular horseshoe in shape with a sandy, pebbly beach, with very little shade. There was a ruinous taverna there, otherwise there was nothing else of man's making.

If you want to view all my photos from Lefkada please follow this link: