Well, ok it's the Joshua Tree (Remastered / Expanded) (Super Deluxe Edition), but I can't help but laugh at the increasingly lengthy version titles around. Normally I wouldn't buy an album I already have just because it had been remastered, but the extras on this seemed well worth forking out £22.95 for.

I only got my copy yesterday and, on the quick look I've had, it seems worth every penny. As well as the original remastered album there is a bonus CD. On this are some of the fabulous b-side gems that were really good enough to have been put on the album proper - such as the hypnotic Luminous Times and the atmospheric Walk to the Water. There are also a few songs that never saw the light of ay in the 80's but have be re-born today, such as Wave of Sorrow (Birdland) and Desert of our Love.
The DVD contains U2 Live in Paris, a show I used to have on a grainy bootleg video, I loved it, so it will be a treat to have a good quality version. The Outside it is America documentary is another great choice for inclusion on the DVD. I can remember watching that when it was first aired on TV - yikes, was it really twenty years ago???
There are also two videos on the DVD With or Without You and Red Hill Mining Town. the latter has been hidden away for twenty years and I can see why! It's hilarious! Very cheesy, with Edge and Adam lurking in the shadows sporting ultra serious expressions, Larry hitting a pipe all the way through equally seriously and Bono angst-ridden and over-acting. Not U2's best moment, but it's a great laugh!
Accompanying this is a book containing lyrics, some handwritten by Bono - I like how they have left in the bits where he scribbled out some mistakes. There are also lots of photos, many that were new to me. Also there are a few articles about the making of the album by the various people involved in the process.
Finally there are four black and white photocards that would look lovely framed. All of this is contained within a sturdy black box with the original album cover photo on the front. Everything in this Super Deluxe Edition is of excellent quality and even if you are like me and have the original album, it is really worth buying for the well-chosen extras which appeal to longtimes fans like myself as well as the new kids. I've just got to find time now to listen and watch all the goodies! 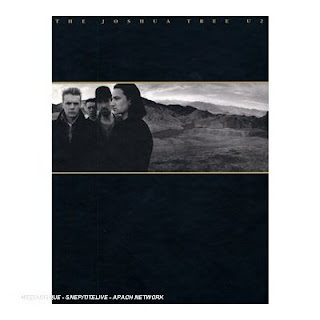 Email ThisBlogThis!Share to TwitterShare to FacebookShare to Pinterest
Labels: Music, The Joshua Tree, U2